What’s in a Meme? The Rise of “Saint Kyle”

The media has been captured the past two weeks with the news of the FBI and Michigan police pressing charges against 14 members of the so-called Michigan Wolverine Watchmen militia for their plot to kidnap Michigan Governor Whitmer in order to “put her on trial” at a secluded location. This event comes out of a whole slew of converging dynamics at play in the United States’ political, economic, and social landscape after a summer of uprising against police brutality has metastasised into a late period of violent armed reaction.

One important case within the previous few months is that of Kenosha, Wisconsin, specifically the shooting of three protesters by a pro-police armed activist named Kyle Rittenhouse. Rittenhouse is now a common household name for his response to a local loosely-organised militia group putting forth a Facebook-hosted “muster call” to counter protests in the wake of the Kenosha Police Department’s shooting of Jacob Blake.

The Rittenhouse shootings created an inflection point and fulcrum through which many militant right-wing movements in the United States have found a central rallying cry and living martyr. In order to understand potentially how this cuts across group identity among the right-wing milieu and how his identity and actions are used to create and reify membership among this cohort of right-wingers, we have taken to tracking down different right-wing memes created out of and about the happenings of 25 August in Kenosha, Wisconsin.

In late August, protests erupted in Kenosha, Wisconsin over the shooting of an unarmed black man by a white police officer. After a short altercation with police, 29 year old Jacob Black was shot 7 times in the back by a police officer, in front of his wife and kids. Tensions in the community led to the outbreak of Black Lives Matter related demonstrations. But while the protests in Kenosha were mostly peaceful, some rioting and violence was reported. The incident with 17 year old Kyle Rittenhouse became infamous for killing two protesters. In the incident, Kyle Rittenhouse shot three people, shooting one in the head, another one in the arm, and one more in the chest. Among Rittenhouse’s 2 dead victims, Anthony Huber tried to stop the armed shooter with a skateboard. Gaige GrossKreutz survived, despite severe injuries to his arm and constant harassment from Rittenhouse supporters. Since the shooting, Kyle Rittenhouse has received support from the militia movement as well from more mainstream right-wing commentators like Tucker Carlson, portraying him as someone maintaining order. This sympathetic narrative as well as Rittenhouse’s actions have elevated him among the militia movement.

The Rise of “Saint Kyle”

To capture images posted by sympathetic narratives online around the violence in Kenosha protests, we used Twitter’s search API to follow specific hashtags and subjects related to movements supporting Kyle Rittenhouse’s confrontations and subsequent shootings.  To do this, we queried Twitter for tweets related to the following hashtags and search terms between 25 September 2020 to 16 October 2020: “based rittenhouse”, #FreeKyle, #FreeKyleRittenhouse, #FreeKyleRittennhouse, “Gaige GrossKreutz”, #justiceforkyle, “Kenosha Kyle”, #KenoshaHatTrick, #KyleRittenhouse, #KyleRittenhouseIsInnocent, and “Saint Kyle of Kenosha”. Three queries returned a total of 37,774 tweets: 18,984 tweets recorded between 25 September and 1 October; 17,775 tweets between 2 October and 9 October and; 1,015 tweets between 9 October and 16 October. Subsequent queries made after 16 October matched the downward trends in specific mentions across the aforementioned hashtags and subjects.

Google Trends similarly shows a sharp increase immediately following the initial incident in August and then a slow decrease in interest in the incident in the first two weeks of September.

Through a combination of queried Twitter responses and manual dives into Facebook pages (before the Facebook purges) and militia forums, we discovered a variety of memes circulating along with narratives sympathetic to Rittenhouse. These memes create a common visual language for ideological and practical coalescence for a deeply competitive and often disparate American right-wing, as we tracked use of Rittenhouse memes from III% militia groups to neo-Nazis to Boogaloo Bois to Proud Boys and more.

Using a mix of literal and referential identification in Dedoose, a qualitative data analysis tool, we were able to generate some summaries of unique memes gathered both through manual collection of data and automated weekly scraping. This garnered 105 unique memes, identified by format, use of meme characters, and the use of symbols and icons.

Of these 105 memes, codes with greater than 10% incidence including the following:

Meme characters, meaning those individual graphics that represent individuals are repeated and often modified for contextual specificity, play an important part of creating narrative in memes, either by establishing social hierarchy, creating shared animosity or support, or as simplified formatting for visual explanation. For those memes containing these characters, we found the following breakdown of incidence burden:

Meme format is also important for conveying meaning, either by adding text to an image, applying it to a format with meaning itself, or by drawing attention to particular dynamics. 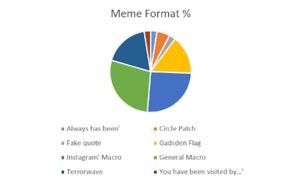 Some of these results are clearly correlated with the political character of the topic, as the Inauguration REEE meltdown image from Trump’s inauguration and the Happy Merchant are used heavily by right-wing and far-right content creators while the Gadsden Flag (yellow flag with a coiled rattlesnake reading “Don’t tread on me”) and the Terrorwave aesthetic are also tied often to the US right-wing, too. Wojaks and macro images (be they ‘Instagram’ style or general) are fairly common likely because of their universality and flexibility. The former is a character unto which different characteristics can be mapped and the latter is just an exceedingly common and easy to make style of visual post to make online.

This dive into Rittenhouse memes turned up connections directly to the Michigan case that this article is contextualised by. For example, Brandon Caserta, one of the accused members of the plot, allegedly shared a Rittenhouse meme (073.png) with the text “When you’ve smoked 3 commies before you can legally smoke cigarettes”, adding the commentary “Savage”.

Later in our tweets dataset, we observed Rittenhouse memes beginning to intersect with other news happenings related to the late summer in the United States. This marks a point of convergence and reiteration that is important for maintaining the importance of the Rittenhouse case within the right-wing zeitgeist. For example, many posts began to compare the response to Rittenhouse’s shooting spree with that of the Pinkerton employee Matthew Dotloff’s in Denver. These comparative posts, used previously to contrast Rittenhouse and police victim George Floyd or to contrast Rittenhouse with the men he shot in August, have evolved to bring in critiques of alleged hypocrisy among those outraged by Rittenhouse’s actions but not Dotloff’s.

Other such “crossover” events include a meme complaining about the NFL kneeling controversy regarding Colin Kaepernick, a few allusions to the “Boogaloo” modality, an encroachment of “patriot” militia references, use of comic characters from the crypto-Nazi cartoonist Stonetoss, multiple connections to Back the Blue/Thin Blue Line adherents, and even some allusions to college campus-bound conservative activist group Turning Point USA.

Nearly half of all unique memes shared expressed support for the use of violence, and almost always included a semi-automatic rifle in the imagery depicting this support. About one-fifth of all memes also depicted explicit imagery of injury to the arm, chest, or head (dependent upon the victim), many of these expressly depicting gore from photos at the site of the shooting. Many of these memes, through subject matter, literal depiction, and insinuated meaning or community-building are extremely dark and violent.

Kyle Rittenhouse represents a type of real-world incident that groups appropriate into their narratives through pre-existing memetic and aesthetic templates. Meme production consists of a simple formula: ‘event’ + ‘meme template’ + ‘ideological aesthetic’ = meme. The continuous flux of events adopted into meme templates allows for ideological narratives to be coupled with any variety of events. The event becomes trivial, meme creators protect themselves from any requirement for logical consistency by labelling professional critics as “trolled” for getting mad about “dumb memes” while plugging them into legitimate news channels through association by hashtag or keywords.

The militia and far-right community in the United States have more differences than is commonly acknowledged in popular commentary. However, Kyle Rittenhouse has emerged as a unifying figure within the social media sphere, often through the language of memes. Rittenhouse is not the only unifier that provides a common aesthetic and cultural umbrella for these extremist movements. The promotion of Rittenhouse’s case on mainstream conservative media outlets threatens to further extend and solidify the narrative of these groups to a larger audience.

Hampton Stall is a conflict anthropologist researching armed and militant movements past and present in the US, Syria, Ireland, and elsewhere. He runs the MilitiaWatch blog on US militias and has previously worked on conflict transformation efforts on the Syrian Conflict.

David Foran is the CEO of Red Sun Information Systems. He is a dedicated cybernetician with research interests that lie at the intersection of ecological analysis, logistics, software engineering, and semiotics.

Hari Prasad is a research associate at Critica Research and Analysis where he focuses on political violence in the Middle East and South Asia. He has been published in Foreign Policy, The New Arab, The Wire, and Current Trends in Islamist Ideology.