Two Years On: Understanding the Resonance of the Christchurch Attack on Imageboard Sites

15 March 2021 marked two years since the Christchurch terrorist attack in New Zealand, where 51 Muslims were killed by a far-right terrorist. The subsequent Royal Commission of Enquiry by the New Zealand government painted a picture of an attacker embedded within an online extremist ecosystem, comprised of a range of platforms – ranging from YouTube to discussion boards popular among the far-right, including 4chan and 8chan, where the terrorist posted his manifesto and linked to the Facebook livestream of his attack (ISD is choosing not to name the terrorist attacker).

In this article, we look at the continued ideological legacy of the Christchurch attack across these imageboard sites. We explore how extremists marked this ‘anniversary’ through celebration, debate and discussion, the differing opinions and attitudes towards the attacker across different imageboards, and how the terrorist has become embedded in the digital culture of the far-right.

We provide a snapshot of prominent narratives related to Christchurch attack across 4chan, 8kun (the successor to 8chan) and 16chan. These include expressions of support and opposition to the attack, conspiratorial claims that Christchurch was a ‘false flag’, as well as miscellaneous ‘shitposting’ around the attack. Notably, even voices opposing the attack are perpetuating antisemitic conspiracy theories.

Our research also shows that despite the actions taken by policymakers and social media companies to limit the spread of the Christchurch attacker’s propaganda, the manifesto and livestream continue to be easily accessible on alt-tech platforms, including the imageboards, Telegram and Bitchute.

Data gathered from 4chan via the open source analysis software 4cat reveals a notable spike in discussion of Christchurch related keywords on 15 March, rising up from a murmur of general references to the attack. 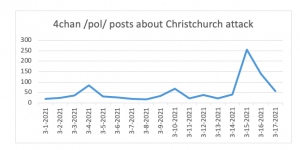 Whilst a number of far-right terrorists are presented as ‘Saints’ on the imageboards, representations of the Christchurch attacker are significantly more frequent than others.

Unlike other terrorist attackers, representations of the Christchurch attacker traverse a broad spectrum, including ironically cartoonish representations.

Memes, gifs, cartoons and other references to the Christchurch attacker are scattered through threads with little explanatory context, in a somewhat similar way to other alt-right cultural reference points, such as Pepe the frog. In essence, Christchurch has become a normalised part of both the visual language and the daily conversations of communities across multiple imageboards.

With this background in mind, below we detail the types of conversations of far-right actors on imageboards and the wider ecosystem of alt-tech platforms two years on from the Christchurch attack.

Although there are many commonalities and overlaps between the communities of users on different imageboards, there are still significant differences between them, including on the contentious topic of the Christchurch attack. These distinctions are driven partially by different moderation practices (for example, the willingness of moderators to allow explicit support for violence) and partially by the users themselves.

In discussions around the Christchurch attack two years on, ISD’s analysis found four main themes present to varying degrees across these imageboards:

By coding a randomised sample of a hundred comments across each of these different platforms, analysts were able to tentatively assess the relative weighting of these themes across different imageboards, which was paired with qualitative analysis to help understand the differing attitudes towards the Christchurch attacker across different extremist communities online.

Research on comments around the Christchurch attack from 4chan revealed that 48% of posts were explicitly pro-Christchurch attacker, 14% were anti-Christchurch attacker, 10% perpetuated conspiracy theories that the attack was a false flag or an operation by Mossad or the CIA, whilst 28% were miscellaneous comments, largely geared towards ‘shitposting’ around the attack. Multiple threads about Christchurch began to emerge on 4chan over the week leading up to 15 March, in part because of the news of an arrest of a 4chan poster for making threats to the Al Noor mosque in the city on the platform. Reactions contained a mix of responses, from support of the person’s alleged plans to condemning violence against civilians to conspiracy theories about him being a law enforcement agent. However, the predominant response appeared to be suspicion and reminders to other users to be careful about what they post publicly.

Threads around 15 March generally framed the date as an opportunity for reflection on the consequences and impacts of the attack. Analysts identified around a dozen 4chan threads dedicated to discussion of the Christchurch attacker, with discussion dominated by self-identifying American, Australian, British, Canadian and German 4chan users. Some were open discussions around the effect of the attack on the far-right cause (‘Now that the dust has somewhat settled – who was really in the wrong here?’). Others openly lionised and celebrated the occasion (‘Happy Saint Tarrant Day from Germany!’). One thread even focused on unpacking the findings of New Zealand’s Royal Commission, seeking to better understand the attacker’s motivations. Some threads were set up as clearing houses for Christchurch themed memes, while others used the opportunity to re-share the livestream and manifesto. Google cache suggests there may have been a number of other threads deleted by 4chan moderators.

8kun is the successor of the notorious 8chan-imageboard, where the Christchurch attacker uploaded his manifesto and the link to a Facebook-livestream immediately before the 2019 attack. Coding of comments related to the Christchurch attack around 15 March revealed that 24% of posts were supportive, 28% were opposed, 28% referred to a false flag conspiracy theory and 20% were miscellaneous comments or jokes about the attack.

16chan is smaller, more obscure and more tolerant of extreme content than either 4chan or 8kun. In an analysis on 16chan’s /pol/ board, 78% of posts relating to the attacker were supportive, including many references to him as a Saint. 18% suggested the attack was a false flag, with only one post being opposed. However, it should be noted that 16chan’s moderators appear to be actively deleting opposing posts for being “demoralisation shills”, and it seems possible that the true levels of opposing sentiment on the board may be at least a little higher than they appear.

A thread about the Christchurch attacker which was started in September 2020 continues to be sporadically active. One user in the thread suggests that future ‘Saints’ should ‘visit’ gun control advocates.

Other recent activity on 16chan includes the production of a scale replica of the Al Noor Mosque in the world building game Minecraft, which was posted on the site alongside a link to a promo video on Bitchute. ‘In Minecraft’ is often used as a phrase added to threats to – supposedly – make them more difficult for law enforcement to act on. But in this case the poster appeared to mean this literally. As of 15 March the Minecraft download had been removed from Planet Minecraft’s site (presumably deleted by moderators). However, the Bitchute promo video was still available, which shows a Minecraft player moving through the replica mosque, shooting characters which appear to be intended to represent Muslim worshippers.

While Facebook came under intense pressure for its role in hosting the original livestreaming of the attack in 2019, two years on researchers found little evidence of content openly praising the Christchurch attacker on mainstream social media platforms around 15 March. But this does not mean the imageboards by any means represent the sole ‘safe space for hate’ in the alt-tech ecosystem.

Previous ISD research has documented that the Christchurch attacker is frequently represented as a hero or “Saint” among hundreds of white supremacist channels and pro-terrorist communities on the encrypted messenger app Telegram.

On Telegram, international white supremacist channels unapologetically celebrated the second ‘anniversary’ of the 15 March attacks by sharing imagery supportive of the Christchurch attacker and his actions. This pro-terrorist content came mostly in the form of images depicting the attacker, alongside other use-generated videos and music-clips.

Two years after one of the worst far-right terrorist attacks in recent history, the atrocities of 15 March continue to have an enduring legacy among the digital far-right. The propaganda materials created by the attacker were designed to inspire other extremists across the globe to take action. As the subsequent (attempted) attacks in Poway, El Paso, Oslo, Halle and Singapore demonstrate, this endeavour was unfortunately successful.

The Christchurch attacker has attained iconic status among the pantheon of far-right terrorists that are openly glorified across a wide range of alt-tech platforms. As the recent legal review by the UK’s Commission for Countering Extremism has highlighted, this can happen with impunity in many contexts. While working with smaller platforms to make access to terrorist materials more difficult remains crucial, this research points towards the need go beyond content removal and address the underlying extremist ideological world-views that have thrived within far-right online subcultures.

A leading global counter-extremism “think and do” tank, for fifteen years the Institute for Strategic Dialogue (ISD) has been dedicated to understanding and innovating real-world responses to the rising tide of polarisation, hate and extremism of all forms. ISD combines anthropological research, expertise in international extremist movements and an advanced digital analysis capability that tracks hate, disinformation and extremism online, with policy advisory support and training to governments and cities around the world. ISD also works to empower youth and community influencers internationally through pioneering education, technology and communications programmes.