In April 2022, police opened fire at a car that was accelerating towards them in the middle of Paris, killing the two occupants. Violent protests had broken out over the re-election of Emmanuel Macron, who had defeated far-right candidate Marine le Pen. Since March, ideas that the election would be ‘stolen’ or ‘rigged’ had been circulating online, emulating the discourse surrounding the 2020 election of Joe Biden in the US. Five people died in the resultant riots in that case, and the fact that the same dynamics were seen at play in France was a concern for democratic institutions everywhere.

The trend toward an illiberal erosion of democracy warrants a vigilance towards future elections. This insight examines the reaction to the Australian federal election in May from far-right extremists and the COVID-sceptical ‘Freedom Movement’, the core of which is characterised by conspiratorial thinking, connections with QAnon, sovereign citizens, and various extreme right-wing beliefs. 160 posts about the election were collected from freedom activists, fringe political parties, and Nazis on Telegram, Twitter and Facebook. They tell a troubling story.

Posts at first took an optimistic and supportive tone, hopeful of gains for the Freedom Movement, but predictably turned paranoid and conspiratorial as election day neared. Posts emerged from anti-lockdown activists insinuating that major roadworks had been arranged around early polling centres to prevent access, and statements were made casting doubt on the security of the election. Other activity at this time drew more heavily from the sovereign citizen playbook, with claims that an improperly issued writ rendered the election unlawful, and, as the current government has been dissolved as part of the electoral process, there was currently no Australian government. ‘Great Reset’ conspiracy claims were also invoked, with one poster linking the impending signing of a Global Pandemic Treaty with the election to paint a picture of a coming dystopia. 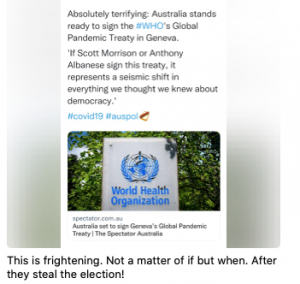 Former Australian Proud Boy and current neo-Nazi Jarrad Searby is notable for his interest in conspiracy theories and groups such as QAnon, whose beliefs he merges with typical National Socialism. The group he is currently associated with, the National Socialist Network, uses concepts such as the Great Reset within their rhetoric and writings. Searby posted the following about the then-upcoming election:

“In 2007 the World Economic Forum published an article drawing on parallels between Anthony Albanese [Labor Party leader and eventual winner of the election] and Aristotle.

The whole article is about depopulation in Australia.

Albanese is supposed to win the election. He is part of the next phase.”

The Australian Sovereignty Alliance is an organisation working to create an international network inspired by British fascist Oswald Mosley. Its founder, Dane Pritchard, is a former candidate for the ‘freedom’ party, The Informed Medical Options Party. In the lead-up to the election, he posted “I would like to remind everyone, THERE IS NO POLITICAL SOLUTION”. This is a sentiment also expressed by National Socialist Network leader Thomas Sewell, and one that would gain more traction in the aftermath of the election result.

It has been widely observed that elements of the Freedom Movement are desensitised to violent political rhetoric in a way that renders it difficult to ascertain the actual threat that these comments pose. The following, posted on the QAnon-adjacent Australia One Party’s Telegram channel in a discussion of the prospect of an unfavourable election outcome, is typical of this:

“So what’s the plan if no freedom fighter gets into a position to contest power? I’ve got my pitchfork and torch ready to go. Just saying.”

“I’m ready to crack some heads.”

The federal election was predicted to yield a comfortable victory for the centre-left Australian Labor Party, and it did. The social media response from the cohort studied was also as expected.

On polling day, a last-minute change to the phone-voting rules – introduced to accommodate for voters isolating after contracting COVID-19 – provided obvious fodder for claims that the election was being rigged. On a Telegram channel for Australian Nazis, alongside countless videos from the Atomwaffen Division-affiliated publication The American Futurist, a regular poster stated their intention to “be spreading it around that the vote was rigged whoever wins”. 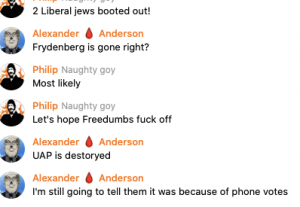 The poster further opined that protests similar to anti-vaccination protests will become more common, but the people protesting “will not realise they are on the NS side”.

As the election result became more clear, claims that the elections were rigged continued but were joined by despair and catastrophisation, especially on Twitter: an impending nationwide collapse was predicted; the neo-Nazi concept of ‘clown world’ was invoked; ‘freedom fighters’ claimed to fear for their lives; more violent rhetoric was posted. A photo of a Teal Duck (a reference to the progressive ‘teal independents’ enjoying electoral success) being shot from the sky was posted with the caption “the games begin!”. A poster wished for a ‘literal’ hung parliament, while another, an Australia One supporter, referenced the Nuremberg trials and posted the lyrics of ‘The Hanging Tree’, a poem from The Hunger Games concerning execution. 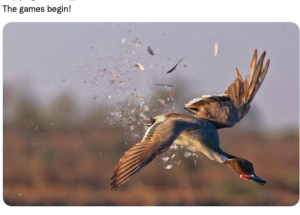 The most concerning discourse could be seen within the Freedom Movement in the hours and days after the election result had solidified. The centre-left major party had won decisively and while disillusionment with the major parties had seen a mass of votes for alternatives, very few  went to the ‘freedom parties’. At this point, frustrated and angry posts took on a threatening tone, moving away from conventional political tactics to a ‘by any means necessary’ approach. 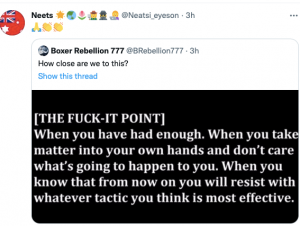 The Nazis in the online study recognised a potential radicalisation opportunity. 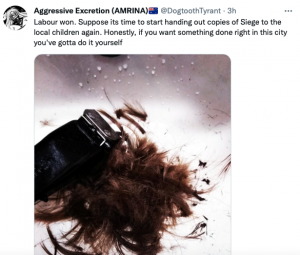 Indeed, at this point, whether by choice or general digital osmosis, accelerationist and fascist phrases and sayings started to become more common in the continuing discourse of a stolen election. Various accounts repeated the saying “strong men create good times, good times create weak men, weak men create hard times, hard times create strong men” – commonly associated and used by fascists and neo-Nazis given their preoccupation with strength, and esoteric Nazism’s view of history as cyclical. Even more common was the accelerationist slogan ‘there is no political solution’.

There has not been anything like a repeat of the January 6th riots anywhere else, yet. There has been no violence in the immediate aftermath of the Australian federal election, regardless of all the online talk. However, it is known that fascists and neo-Nazis look to the conspiracist community as fertile grounds for recruitment and radicalisation. It is important not to write off the Freedom Movement participants as lost to violent right-wing extremism, as their beliefs and motivations remain multifaceted. However, it is equally important to recognise how recent developments have the potential to steer vulnerable individuals down a dangerous path.