From Orange to Red: An Assessment of the Dark MAGA Trend in Far-Right Online Spaces

By Hampton Stall and Daniel Grober

The far-right online goes through aesthetic and organisational shifts in waves. From Woods & Hahner’s Make America Meme Again to Hawley’s Making Sense of the Alt-Right to Nagle’s Kill All Normies, several works have attempted to explain how or why the pro-Trump ‘Alternative Right’ arose from the Internet. Though there have been notable happenings since in the aesthetic, organisational space ( ‘White Lives Matter’, ‘White Boy Summer’, and more), the newest iteration of online alt-right continuity is emerging on our screens now: Dark MAGA.

Dark MAGA is a post-alt-right online aesthetic movement based around a hardening of the pro-Trump online space, a repudiation of optics-conscious organising that delights in and celebrates violence and the terror that fascist organising might inspire. Like the Alt-Right from which it originates, Dark MAGA has ties to misogyny and trolling and has already seen early amplification among conservative influencers. Dark MAGA thereby provides openings for bad actors, creating multiple fronts for entryism and networking among a broad swathe of violent extremist actors.

There has been little writing on Dark MAGA, and the reporting that has been published has missed the point. There is, however, a basic Know Your Meme entry for Dark MAGA, which we seek to supplement with further analysis.

Much has changed since the Alt-Right’s ascendance to the mainstream of American politics, and there are developments that deserve discussion with regard to how they’ve impacted the trajectory of former Alt-Rightists and those who have come of age or otherwise radicalised into the Alt-Right-sensitive milieu. The first of these is the rise of the ‘Skull Mask Network’, which leaves their aesthetic imprint on the Dark MAGA moment but it remains unclear if much more.

Upchurch defines the ‘Skull Mask Network’ as “a transnational neo-fascist accelerationist terrorist network that includes National Action in the United Kingdom, Atomwaffen Division in the United States, and Antipodean Resistance in Australia” which evolved out of the Iron March fascist forums. It is important to delineate that ‘Dark MAGA’ may contain imagery and content that alludes to these mobilisations, but Dark MAGA appears to be more of an overarching banner of multiple divergent groups and ideologies, often at odds with themselves. Neo-Nazi iconography sits squarely next to red MAGA hats and Odinistic depictions of Donald trump. For this reason, ‘Dark MAGA’ can be seen as an umbrella that is accepting of, rather than a direct derivative from, ideas and symbology of the ‘Iron March’ networks.

Studying the fluctuations in online far-right spaces such as these is important because in the literature, it is generally understood that online expression creates fertile ground for action. There exists, therefore, an important interaction between a person’s and a collective’s on- and offline worlds. This dynamic, coupled with documented instances of far-right groups attempting to influence reality through online campaigns, therefore, makes it important to understand the state of the art in online world-building. This charge is especially crucial regarding those movements that are obviously action-oriented and intentional about affecting real-world processes.

Patriot Front’s banner and sticker campaigns exemplify the transition from online aesthetics to offline action and the interpretation of these actions as ‘activism’ by far-right communities. These activities across the United States utilise the aesthetic and art style conceived by Thomas Roussou, and others, to recruit and act as metrics of members’ success, as seen by internal documents released by Unicorn Riot. While the impact of these actions may be hard to gauge, it would be a mistake to ignore the ever-growing importance of memesmiths and content creators in movement-building, especially given their ability to spur people to take action offline.

Below, we provide an analysis of the rise of a cultural moment among the online far-right, the emergence of Dark MAGA, a movement that blends aesthetics and metapolitics primarily through memetics and the indexing features of social media. The Dark MAGA movement comes out of the bruised online Alt-Right, an ailing mobilisation that has been downtrodden by the increased media scrutiny following lethal violence at Unite the Right in Charlottesville, Trump’s electoral loss in 2020, and the expansion of legal retribution by the FBI and DOJ following the storming of the US Capitol Building. The online right, therefore, seems to be moving into a post-Alt-Right mobilisation. The lessons learned are divergent and varied, as a new wave of reactionary movements emerges with 2024 on the horizon.

The first appearance of the phrase ‘Dark MAGA’ was tweeted on 21 January 2022. In the creator’s recollection, he was alone at a bar when the words popped into his head. Later, reflecting in a live chat on Twitter on 19 March 2022, the same poster described the concept of Dark MAGA as “Napoleon, being exiled, and then raising a fucking army to attack Europe to attack the elites.” This vengeful leader, having lost power, forced to cede control, and then returning with wrathful determination, is the underpinning of this wave. Another Dark MAGA influencer added, “if you want to win, if you don’t want to repeat the past, you have to get mean; you almost have to embrace the villain role that they’re bringing you with.”

Dark MAGA seemingly seeks to unite or otherwise negate some of the sectarianism of the online far-right in the US. This, on one hand, may create a nonsensical mash of ideological overlap for analysts who may be confused to see references to Trump, moldbug, Nick Land, James Mason, and QAnon all within the same discursive space. Though this may appear disorienting or disorderly, it’s really not out of the norm for pro-Trump meta-ironic posting on the Internet. The disavowal of “optics” may just make these disjointed representations more obvious and apparent to outside observers.

The basic aesthetic premise of Dark MAGA is simple. Most images have a red-and-black or red-and-blue edit over photos with the contrast turned up. Figures may be given laser eyes, usually in a light blue shade. Sonnenrads, swastikas, and wolfsangels often accompany the image, which might also have a not-so-veiled threat of violence or revenge. Trump is heavily featured, with special consideration for the dramatic photos of him that have a large American flag or dramatic lighting. Dark MAGA examples below:

Through collections from Twitter, Telegram, and meme aggregation sites, we gathered about 4,000 unique memes associated with Dark MAGA, many of which share these same themes. A sample of 100 memes across the dataset featured 38 portrayals of Donald Trump, 12 overt Nazi symbols, 9 US flags, and 4 references to QAnon. The visual library of this online aesthetic movement is clear and public, inviting others to adopt their own ‘Dark MAGA arc’ and participate.

Some Dark MAGA content creators have sought to define the constraints of their aesthetic movement or otherwise position themselves among the far-right online. Below are several images for reference, sourced from Dark MAGA creators or otherwise indexed in the conversation. First, at left, a Dark MAGA creator puts the aesthetic alongside other MAGA aesthetics, such as ‘Revolt MAGA’ (referring to Julius Evola’s Revolt Against the Modern World and an aesthetic movement combining Nazi symbols with vaporwave editing styles). Top right, a Dark MAGA creator seeks to distinguish the aesthetic from other fascist movements by painting Atomwaffen Division and Patriot Front as unimportant and cringe, in contrast with a skull mask-wearing and sonnenrad-displaying Dark MAGA figure too nonchalant to care. Bottom right, another meme shows the Dark MAGA movement’s attempts to straddle the balance between skull mask aficionados and MAGA adherents with a Thanos ‘perfectly balanced’ meme showing both. 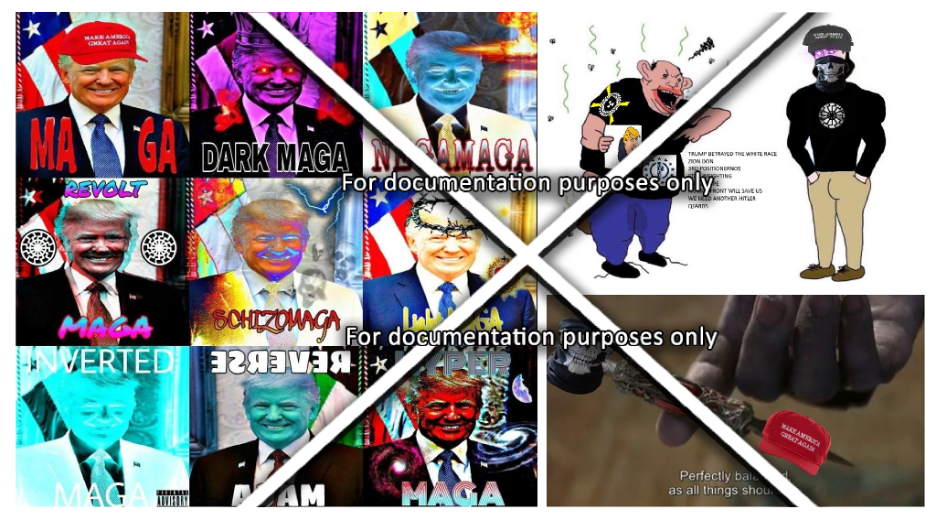 Dark MAGA, like previous Alt-Right spinoffs, remains connected to gamer activism. Dark MAGA memes often reference characters or factions from gaming worlds. From Warhammer 40k, the 44th president is depicted as God-Emperor while Dark MAGA adherents are agents of Chaos. In other cases, a Dark MAGA universe Trump is depicted as tragic hero-turned-villain Arthas Menethil from Warcraft, whose storyline leads to ultimate damnation through genocide and patricide. Five other video games are represented in our sample set of memes.

In addition to these references, discussion of Dark MAGA was seen on online forums related to ‘Gamergate’, a far-right online harassment campaign from 2014-2015 targeting women and LGBTQ+ members of the gaming community. However, sentiments on these forums are not always positive towards Dark MAGA, and threads devoted to sharing memes are often devoid of Dark MAGA content.

Some Dark MAGA influencers and outside far-right observers have expressed concern that Dark MAGA will not independently evolve. They fear it may be co-opted by QAnon adherents, a community which has been fractured and absorbed by different far-right groups in the last year. Those steering this burgeoning movement somewhat anticipate this dynamic, as the flagship Dark MAGA Telegram channel claims to be the “antidote to Q.” In an attempt to bring QAnon adherents into their movement, symbols known among the Q world are sometimes incorporated in memes.

Posters on far-right message boards and streamers on alt-tech platforms have voiced sentiments that Dark MAGA may be an “op,” meaning a deliberate operation conceived of by either the left or the federal government. A former Tim Pool employee outlined some of these concerns on his online show:

“I’ve already started to notice some #DarkMAGA posts including the Nazi flag and Q. The Guardian, who will no doubt tell us that Ukraine’s Azov fighters are only 10% Nazis …. but that Dark MAGA is for sure a real National Socialist Movement in America and supporters of which should have their bank accounts frozen immediately.”

Others see Dark MAGA as an op conducted by Trump and the left, who–by their account–are both controlled by the Jews. In this case, the argument goes, boogeymen like George Soros are working through Dark MAGA to reinforce the idea of a two-party system and to dissuade any actions that could bring about a white, authoritarian ethnostate. This idea can be seen floating around message boards rather than platforms such as Twitter, Instagram, and Tik Tok. However, message boards as a medium are still commonly used by older white nationalists who operated on boards such as StormFront and the Vanguard News Network.

It is still hard to assess the direction and impact of Dark MAGA in the medium term. The aesthetic has enjoyed significant boosts from large accounts. Nick Land, an originator of the idea of accelerationism that bore both left and right iterations of the term’s usage, has interacted with Dark MAGA spaces and accounts, increasing the algorithmic exposure of Dark MAGA content to his 40,000 followers and beyond (see below, left). Amanda Milius, a friend of right-wing poster Jack Posobiec and the director of the conservative 2020 film ‘The Plot Against the President’, edited her Twitter profile to match the Dark MAGA aesthetic, adding “Dark MAGA Mode” to her screen name for her 85,000 followers (below, middle). The first verified Twitter account to adopt Dark MAGA is former White House lawyer Andrew Kloster. Kloster also changed his name to “Dark Kloster” to match for his 15,000 followers (below, right).

The new Dark MAGA  trend should be viewed as an evolution of the Alt-Right, creating a genealogical through-line from GamerGate to now. Dark MAGA is an embodiment of the ‘Revenge President’ birthed from the far right’s urge to reclaim what they crave and have lost: power. Proponents seek to punish their political enemies without attending to political correctness. Dark MAGA is an appeal to accept the true desires of the most dissident Trump supporters and mainstream their feelings through the medium of memes, which played a crucial role in the 2016 election. While Dark MAGA has not taken an enduring foothold yet, there is a distinct possibility it might, and from there it is likely to grow to influence the 2024 election.

Hampton Stall is a conflict anthropologist and researcher of the online far-right, focusing on memetics and the cultural production of paramilitary and far-right groups.

Daniel Grober is researcher focusing on Neo-Nazis and how they use the Internet to spread information and fundraise online.