With the rise of the Internet, there has been growing interest in its impact on radicalisation and extremism in the circles of policymakers, scholars, and the media. The Internet and ‘online radicalisation’ have quickly joined the ranks of other mono-causal explanations of radicalisation, such as mental illness or religion. When evidence arises that the Internet was used during a process of radicalisation, this is often coined as the sole explanation for their actions. This may result in a lack of understanding of a deeper and far more complex issue.

This Insight summarises the findings of a study that examined how the Internet and social media influenced the radicalisation processes of extreme-right lone actors who carried out or attempted to carry out large-scale terrorist attacks in Western democracies since 2000. The study aimed to investigate online radicalisation by identifying mechanisms seen as particularly relevant for explaining the process. The findings suggest that online radicalisation is more complex than commonly assumed, and furthermore, that it cannot be meaningfully analysed independently of offline influences.

After having identified these six mechanisms, we then conducted a comparative case study aimed at determining how the mechanisms unfolded and combined across different cases. We began by compiling a dataset of candidate cases that met our selection criteria (n=25) before purposively selecting three cases based on a ‘diverse case’-logic: Peter Mangs, Anders Behring Breivik, and Dylann Roof. The figure below summarises our findings. 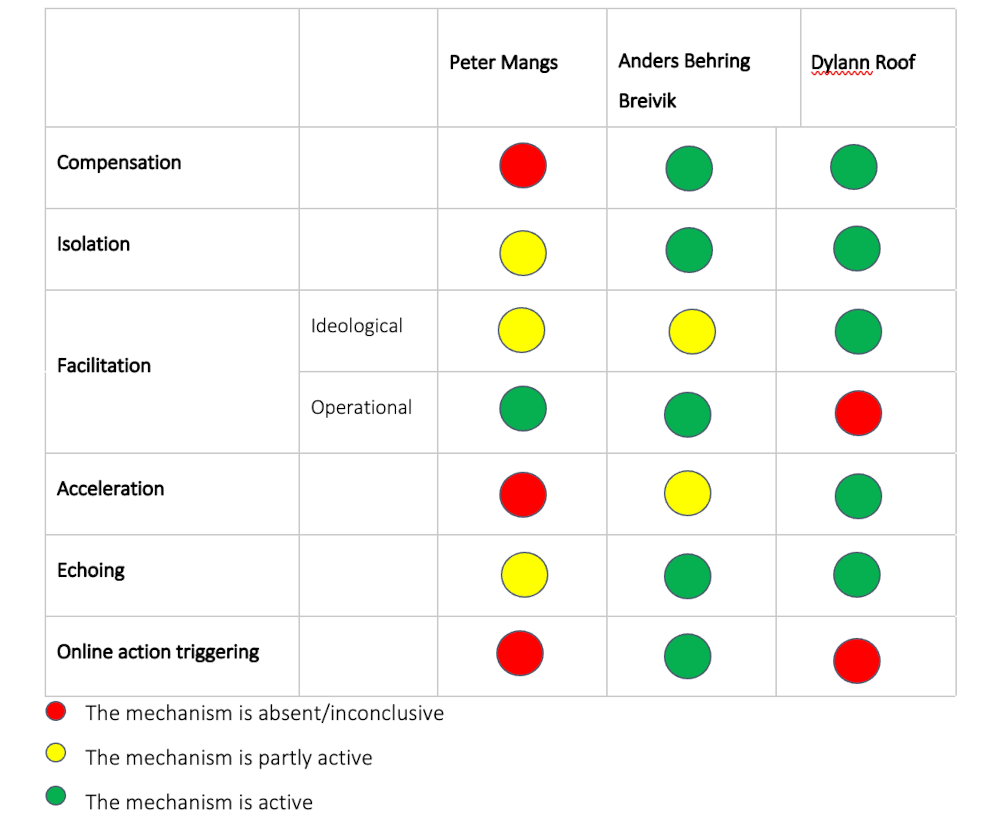 In all three cases, pre-existing vulnerabilities were present in the forms of childhood trauma, alienation, and dissatisfaction with self. In two out of the three cases, the individuals compensated for these vulnerabilities through increased online presence. While this was not the case for Peter Mangs, one should keep in mind that his radicalisation process took place in the late 1990s when the Internet was less widely available.

Isolation was also found to be significant. In all three cases the individuals experienced isolation in their offline lives, with the Internet becoming their main source of information and interaction. This paved the way for online immersion. Offline isolation in the form of detachment from offline social milieus likely provided the locus for the individuals to seek out information and belonging in alternative online communities where communication is voluntary, and the individual is in control.

The Internet also facilitated ideological development in the radicalisation process. All three individuals used the Internet for ideological development, and two out of three conducted operational planning online. Thus, the Internet may prove an effective venue for the planning of terrorist attacks, allowing anonymous information-gathering, possibly alleviating the fear of capture that may stop some individuals from acting.

Finally, echoing had an impact on all three individuals through legitimising, strengthening and shaping their ideology as well as their sense of attachment to an online radical community. We found that in all three cases, the individuals expressed a belief that they were acting on behalf of their community they saw themselves as a part of. Thus, echo-chambers likely provided a venue where – possibly due to the anonymity of the medium – the threshold was lowered for engaging in conversations about taboo subjects. This may have promoted a sense of community.

The perhaps most important take-away from this study is that online radicalisation could not be identified as a solely online process in any of the cases that were analysed. Instead, radicalisation started offline in all three cases in the form of vulnerabilities that likely made the individuals more susceptible to online influences once exposed to them. In addition, isolation from offline milieus unmoored all three individuals, making them more likely to seek community belonging in alternative online milieus. While the internet did play a central role in facilitating the radicalisation process through making extreme information easily accessible, as well as amplifying polarisation and legitimising extreme ideology through echo chambers, it is not effective on its own. Offline vulnerabilities seem to be a necessary condition for individuals to become fully immersed in online radicalisation processes.

Individuals who drop out of school, quit jobs, or otherwise disengage from society may therefore be particularly vulnerable to extremism online. Knowing the signs of vulnerability and identifying these individuals before they can radicalise online may thus be an important strategy for countering radicalisation.

Importantly, individuals who conduct violent attacks are not always outwardly violent in their rhetoric. The analysis did not show that any of the three individuals used explicitly violent rhetoric online. Thus, monitoring extremist websites for violent words may not be sufficient to identify and stop those who are prone to violence.

Lastly, all three individuals expressed ideologically extreme statements to close friends or family in the time before conducting violent acts. Had this been reported to the authorities, the damage in these cases may have been minimised or avoided completely. Thus, tips from people close to the individuals, and from the public may be an effective strategy for countering violent extremism.

So, how does the Internet affect the radicalisation of extreme right lone actors? The Internet affects lone actor radicalisation by way of compensation, isolation, facilitation, acceleration, echoing and action triggering. However, it remains only one of several explanations for why an individual radicalises into violent extremism. In reality, online radicalisation involves real people whose actions cannot be considered without also considering the socialising settings that form their beliefs and inform their actions both within the online sphere and outside of it.