On 4 October 2021, just one day after Facebook whistleblower Frances Haugen went public about the company’s prioritisation of boosting engagement over disinformation mitigation, Facebook experienced an hours-long outage that rendered its platform – along with its other apps such as Instagram and WhatsApp – virtually inaccessible. While this may have been a temporary interruption in communication for most, the timing of this incident had far-right social media users positing that the outage was a meaningful omen of things to come. These users, especially the lasting believers of the QAnon prophecies, gamified the outage to their advantage by using it to spread conspiracy theories both old and new.

Rather than accept the likelihood of a simple technological glitch, social media quickly became a venue to share suspicions. Many flocked to Telegram, a popular alternative social media platform among the far-right, to discuss the event. There, members of QAnon and anti-vaxx groups suggested that something more sinister was responsible for the outage. Some theories were vague, already anticipating that Facebook’s official reason, such as “a server error”, would not be a trustworthy one: 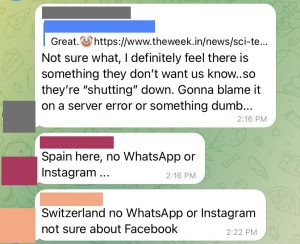 Others were more prophetic. One QAnon-centric account asked, “Could this be it, Patriots?”, garnering responses of agreement and high expectations. Several members recommended going to another messaging app called Signal, just in case: 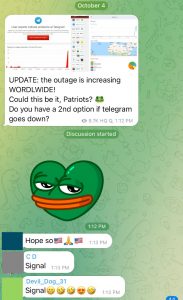 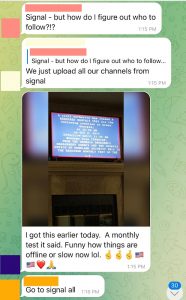 While it’s not entirely obvious what these users thought would happen, it’s likely that they were referring to any number of QAnon predictions, such as the ‘Great Awakening’ or ‘The Storm’. Post-election, these beliefs have evolved to infer that Donald Trump will soon be reinstated as President – a theory that people entertained on Instagram hours after Facebook’s apps were restored: 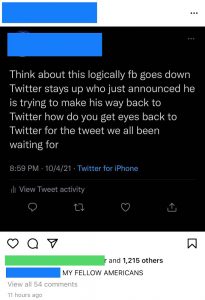 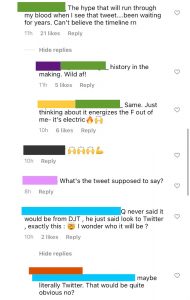 The original post makes a bold but complex claim: That Facebook’s outage was purposely orchestrated to direct people back to Twitter, in hopes that they would collectively witness the transformative Tweet that loyal patriots have “all been waiting for.” This is a reference to one of Q’s earliest prophecies, seen here in a Q drop from 2 November 2017:

QAnon followers have been anticipating this Tweet for years. They believe it will likely come from Trump himself, and indicate the start of his mass eradication of Democrats and the alleged Satanic Cabal. Because Trump recently requested that Twitter restore his banned account, loyalists took the circumstances of 4 October to suggest that he was finally returning to fulfill the QAnon mission. Of course, this has been a failed prediction before, and there is no evidence that any such event is likely to occur.

The Hope for ‘Red October’

One of the main Facebook outage theories circulating within the far-right – which, to be clear, spread across left-wing accounts as well – was that the entire Facebook domain was gone indefinitely (a theory that was quickly disproven, explained instead by an error that affected DNS servers). Still, a lack of verified evidence didn’t stop far-right users on Twitter from continuing to spread that rumour and process their excitement about what was to follow. Some claimed that they were “ready for more,” or that they had warned people to “get prepared and stay home”: 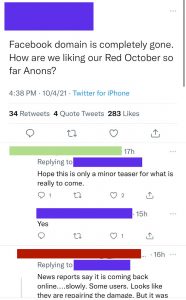 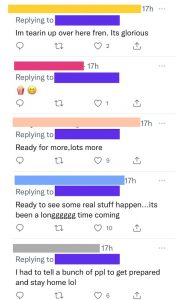 Notably, the original Tweet alludes to something called ‘Red October’ – another QAnon reference. Several Q drops mention the 1990 movie, The Hunt for Red October, as seen in this post from September 2020: 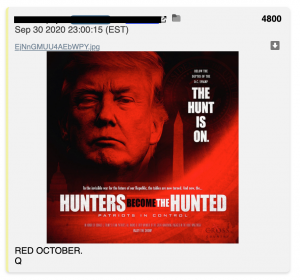 Similar to ‘The Storm’, the idea of ‘Red October’ is also meant to signify the beginning of a Trump takeover. Last year, Trump’s October 2020 COVID diagnosis sparked similar suspicions among the far-right. With this, the timing of the Facebook outage further fuelled the narrative that ‘Red October’ had arrived at last. These claims saturated far-right Telegram channels, where connections were drawn between things like China and George Soros to substantiate their argument: 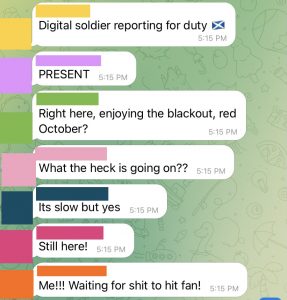 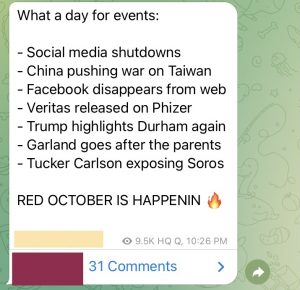 As if summoned for battle, one user declared: “Digital soldier reporting for duty.”

Arguably the most popular theory was that the Facebook app outages were just the beginning of a much longer and deliberate social media shutdown. For QAnon followers, this is known as the elusive ‘10 days of darkness’, which Q has been promising since 2017: 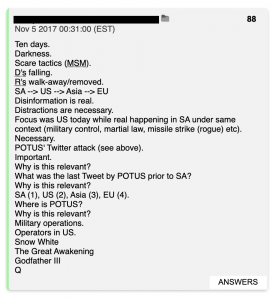 While believers have taken this to mean a number of things in the past – for example, the disproven ‘vacant White House’ theory from earlier this year – many feel that the ‘ten days of darkness’ will manifest in the form of a worldwide social media/communication blackout. So when Facebook’s apps ceased to work on 4 October, many began counting down, preparing, and enjoying what they believed to be the start of ‘the show’.

Here, Telegram users once again connect the timing of the outage to Trump’s Twitter return request: 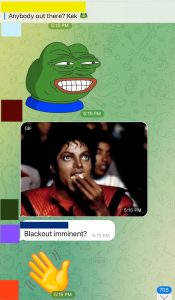 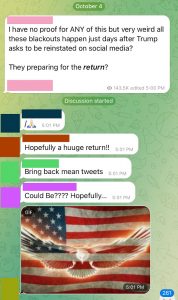 On Twitter, several prominent conspiracy theorists agreed that the ‘imminent’ blackout would happen around this time: 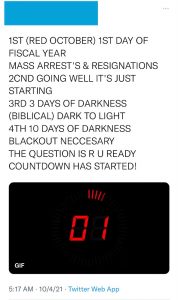 Unfortunately, this same user has posted similar messages in the past. Months ago, they Tweeted that the ‘ten days of darkness’ had already started on 13 August 2021: 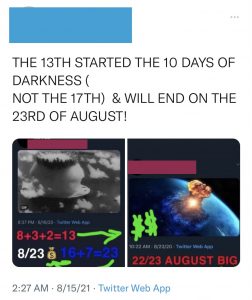 In reality, the Facebook outages on 4 October only lasted about 6 hours.

“More Jaded by the Minute”

If there’s anything that can be guaranteed in terms of far-right conspiracy theories, it’s that ardent believers are fated to experience continuous disappointment, and the theories surrounding the 4 October Facebook app outages were no exception. Not all far-right social media users were quite so optimistic that day, as evidenced by some impatience on Telegram. One user, tired of waiting for the moment they’d been promised, claimed they felt “more jaded by the minute”: 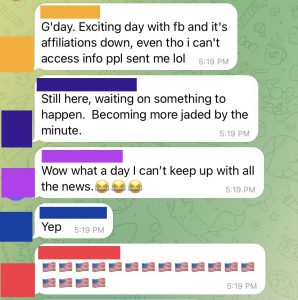 This event was not, by any means, the first unusual circumstance to fuel far-right narratives. In February 2021, extreme snowstorms in Texas led to claims that Bill Gates and the government were controlling the weather. Today, effective and safe COVID-19 vaccines continue to be demonised by conspiracy theorists as a lethal form of population control. There appears to be no limit to the extent that newsworthy events are manipulated to serve far-right narratives. But these patterns serve as an important reminder of the very thing that Facebook has just been criticised for: The power of social media in eroding trust in our governments, our industries, and each other.

Sara Aniano is currently a Communication graduate student at Monmouth University in West Long Branch, New Jersey. Her primary research interests include QAnon, far-right ideologies, medical misinformation, and extremism on social media. Particularly, she aims to highlight Instagram’s role in the spread of conspiracy theories and its contribution to harmful real-world events and violence. Sara graduated from Quinnipiac University in 2012 with a major in film production and a minor in graphic design, and has worked in design and marketing ever since. She currently works as a graphic production coordinator at Monmouth University.