By 2019 and 2020, an upsurge of far-right populism that had grown from the earlier Reclaim Australia rallies was seemingly faltering. The more extremist and violent nature of the United Patriots Front (UPF), the most prominent group to emerge out of the rallies, had alienated what mainstream support the movement had stood to gain. After the UPF folded, internal divisions around whether to maintain the ‘patriot’ branding or embrace full mask-off Nazism culminated with the formation of the National Socialist Network (NSN).

Recently, the NSN have been going through some changes. Their leader, former soldier Thomas Sewell, has been charged with armed robbery, robbery, theft, criminal damage, affray with face covering, affray, assault with a weapon, violent disorder, common law assault and committing an indictable offence whilst on bail. Sewell was incarcerated, leaving propagandist Jacob Hersant the de facto interim leader. This was to be short-lived as Hersant was soon arrested on similar charges.

An in-depth media exposé laid bare the NSN’s commitment to violence and reverence of Christchurch killer Brenton Tarrant, as well as links to proscribed transnational violent extremist groups such as The Base and Combat 18. Additionally, the piece mentioned leadership tensions, with senior member Jarrad Searby named as a potential successor to Sewell and Hersant. Searby is a former Australian Proud Boy, gym owner, and mixed martial arts fighter with deep links to the COVID-19 anti-lockdown movement. As Hersant’s arrest has likely solidified his position, this Insight uses text analysis of Searby, Sewell, and the NSN’s public Telegram channels to speculate on the future direction of the NSN and characterise Searby’s potential leadership.

The content of these Telegram channels can be visually represented as word clouds to parse differences, and similarities in common words and themes. This method distils a large volume of text into an accessible representation based on frequency of occurrence. As such it provides an informative visualisation of individuals within a group identity. As the channels are all related to the NSN it is expected that many or most of the prominent themes will be very similar, but peppered with individual differences based on individual traits. This is exactly what is seen when considering the NSN word cloud: 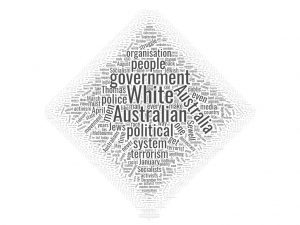 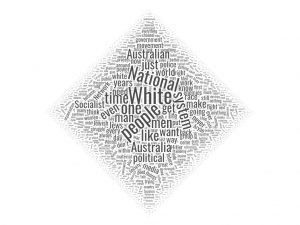 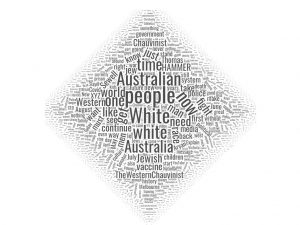 Some obvious and expected crossovers can be seen – the core content of both Searby and Sewell’s clouds resemble the NSN’s, heavily featuring Nazi preoccupations such as white people, Jews, the government, the system, and in this case Australia. However, by isolating the unique elements of the individuals’ clouds, informed speculation is possible on how they will differ as NSN leader. 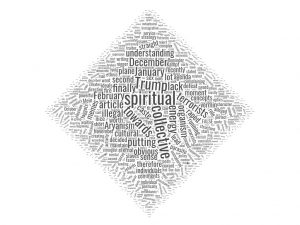 The most prominent word unique to Thomas Sewell’s word cloud is ‘spiritual’. Throughout the channel he refers to an “…evil process of racial, cultural and spiritual deconstruction of our civilisation…” and a white race that is being “…destroyed spiritually through materialism, hedonism and nihilism…” Elsewhere, Sewell posits a spiritual hierarchy, in which white people are seen to possess more sentience, complexity, and spirituality than other ethnic groups. Moreover, neo-Nazis are placed spiritually above ‘non sentient Whites’ or ‘normies’ who lack independent thought and a connection to the universe, and are ultimately no better than beasts.

Sewell also spends a significant amount of time discussing collective interest and collective action. A collectivism and communitarian within the NSN and Nazi movement is emphasised. Sacrifice for the group is held up as the highest ideal. This concept is tied into another prominent term, ‘organism’, in that the white racial collective is offered as a superior ‘macro-organism’. Other mentions of the term ‘organism’ are tied into a biological and philosophical treatise on religion, culture, and striving towards the highest state of being.

Given the time period in which the NSN came into being and has existed through, it is not surprising that ‘Trump’ appears frequently in Sewell’s cloud. However, unlike many on the far-right, Sewell’s views on Trump are largely negative. There are two basic reasons for this – firstly he is not seen as a trusted ally of white supremacism, valuing profit above race and being accepting of Jewish people. Secondly, his success is seen as jeopardising a coveted race war and overthrow of the government by appeasing sections of the populace that might otherwise turn to violence (it must be mentioned that, during the past few years, more than a few have anyway).

There are a few more prominent terms within the cloud that warrant brief mention. ‘Aryanism’ is mentioned frequently as another topic of Sewell’s philosophising, ‘terrorists’ is a commonly used word as the prospect of the NSN’s proscription is discussed and derided, and likewise ‘memes’ largely refers to the view that Australian neo-Nazis affiliates facing terror charges are being persecuted for expressing their views online, rather than attempting to make weapons and explosives. 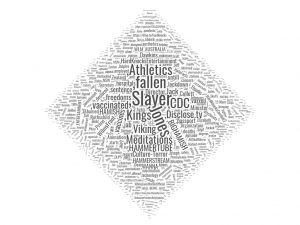 Unlike Sewell’s channel, which is infused with the NSN brand, Searby’s is more eclectic. Most of the prominent terms unique to his word cloud refer to his reposting of content from other individuals and organisations. This is to be expected as Searby is not a long-standing member of the NSN, but formerly an affiliate who used his connections to funnel recruits into the group, and he has connections to a number of other causes and organisations.

‘Slayer’ refers to the channel of neo-Nazi Neil Erikson. On this channel Erikson rails against his legal woes stemming from his harassment of the LGBTI+ community. ‘Viking’ refers to the channel of fellow NSN member Brad Ingram. ‘Kings’ refers to the Aryan Kings, a white supremacist group whose aims are to ‘raise awareness’ of the Great Replacement conspiracy theory and confront left-wing groups. Within these channels and others there is a significant amount of cross-posting and reciprocal promotion. This mimics Searby’s offline role as a conduit and broker between various violent extremist and conspiracist groups.

Conspiracist content is almost as common on Searby’s channel as Nazism, with much of it playing on conspiracism’s natural tendency towards anti-semitism. Popular right-wing conspiracy theorist Alex Jones is denounced as a covert government spy and secret Jew. The Centre for Disease Control is implicated in a Jewish conspiracy. Most notable, however, are the various musings on vaccinations and pandemic-related lockdowns. As described by far-right media outlet The XYZ, “Jaz Searby forms a nexus between the nationalist scene and a massive international anti-lockdown scene.”

UPF founder and leader Blair Cottrell is known for wanting a picture of Adolf Hitler in every Australian classroom. However, Cottrell was and is consistently unwilling to self-identify as a Nazi or white supremacist. This approach initially paid dividends with Cottrell appearing in a suit and tie on the relatively mainstream Sky News Australia. The abandonment of any attempts at mainstream appeal caused a rift between Cottrell and NSN founder Thomas Sewell, however in Searby the NSN may have found a compromise between Cottrell’s attempted populism and Sewell’s explicit Nazism.

Analysis of Sewell’s Telegram channel reveals a self-serious philosophical esotericism, as well as a purist mindset that is highly critical of ‘normies’ and many fellow travellers in the far right. Conversely, while a committed Nazi, Searby’s ties to other movements such as the Proud Boys and the anti-lockdown movement may represent a dangerous opportunity for the NSN to grow its size and influence.