By Laurence Bindner and Raphael Gluck

Last weekend marked two important dates in the history of jihadism: the 20-year anniversary of the 9/11 attack by al-Qaeda (AQ) and the start of the trial in Paris of the 13 November 2015 attacks carried out by Islamic State (IS). This article aims to take stock of the progression of AQ’s propaganda following the emergence of IS: to what extent do the two groups’ digital strategies embody their ideological differences and reflect their organisational evolution? How do they diverge? Despite the weakening of both group’s media capabilities, how has AQ’s media managed not to be overshadowed by IS’s stronger brand and more frequent propaganda machine?

Pragmatically, jihadist groups have embraced information technology since the advent of the Internet. They immediately integrated that, as in an asymmetric conflict, informational warfare constitutes one of the key fields of battle: mediatisation and magnification of actions, ‘propaganda of the deed’ in order to recruit, dissemination of strategic outlines, messages aimed at enemies, recruits and populations under their domination, but also a support function of the jihad (fundraising, tactical advice, tutorials, formation of cells, etc.).  Nevertheless IS, in its first iterations, quickly distinguished itself from its ‘elder brother’ AQ particularly in its propaganda. Over the years, the two groups have pursued divergent media strategies in terms of production, formats, dissemination and rhetoric, corresponding to distinct ambitions and positioning in terms of deployment, recruitment and ideologies.

Three Major Differences Between Islamic State and Al-Qaeda: The Establishment of a Caliphate, Excommunication and Recruitment

First, while both groups aim to establish a ‘Caliphate’ governed by Sharia law, the temporality of this objective differs between IS and AQ. IS sought to establish a so-called Caliphate in the short term, by force, while AQ has a longer-term, less coercive strategy, and prefers to go through the preliminary phase of ‘conquering hearts and minds’.

The second notable difference is that IS systematically excommunicates non-Muslims, Shias and Sunnis who do not follow its dogma, and does not hesitate to attack these groups. AQ, on the other hand, purports to reject this doctrine of excommunication, not to commit systematic violence against Shias and to condemn those carried out against Sunni Muslims.

Finally, one of IS’s goals was to populate its so-called Caliphate. The recruitment strategy that was set up was therefore broad and aimed to recruit a wide spectrum of people. In contrast, AQ’s strategy, despite its goal to ‘unify’ the Ummah, maintained a more elitist, ideological and intellectual approach to recruitment.

These three fundamental differences are reflected and embodied in the media strategies of both groups. In order to achieve its objectives and to establish itself as the dominant brand in the jihad ‘market’, IS has implemented an innovative communication strategy in terms of content, volume, diversity of formats, modes of dissemination, rhetoric and extreme violence, clearly distinguishing itself from AQ’s propaganda, relegating the latter to the background during the so-called Caliphate period. Nevertheless, the latter sustained with regular publications, lecture series, and some photosets.

IS has built a real mass production machine, reaching the considerable number of 754 unique media elements published in a month in August 2015, as a strategy of overflowing towards social networks. AQ, on the other hand, generally publishes more sparingly, ‘ad hoc’ publications corresponding to a message, a claim or a specific event, without seeking volume.

In terms of distribution, the spread of IS content can be compared to concentric circles, at the center of which are a few official agencies, the core media such as Nashir, al-Hayat, al-Furqan, Amaq, maktabat al-Hima. Around these media groups located at the ‘heart of the reactor’ are other foundations, close to the core media without necessarily being affiliated to them, which translate, relay, amplify and even publish their own content. This amplification continues as other pro-IS media foundations in turn take over the translations or self-generate content. Translations are systematically made to reach the target reader, sometimes in more than 15 languages as was the case with Rumiyah magazine. By contrast, the distribution of AQ’s propaganda is the result of the group’s decentralisation strategy: the successive creation of subsidiaries, anchored in local issues, has resulted in the creation of as many media foundations. This structure of the different AQ subsidiaries corresponds to a horizontal structure, with foundations that publish independently and each with its own media: as-Sahab for AQ Central, Sham al-Ribat for Hurras al-Din (AQ’s Syrian branch), al-Andalus for AQIM, al-Malahem for AQPA and az-Zallaqa for JNIM, AQ’s Malian branch, or Sahab subcontinent for AQIS. Each media outlet has its own logo and layout. This media structure reflects the evolution of the group in terms of decentralisation and the attention that the branches give to local issues and grievances.

While IS seeks visibility, volume and virality, investing time and effort spreading to major social networks for this purpose, AQ uses them sparingly, (albeit with exceptions such as al Shabaab, the Somali branch of AQ, which has more footprint on certain social networks.) AQ is more interested in stability, the endurance of a platform, its longevity, and will allocate fewer resources to continue to publish on the major platforms, while IS is waging a form of ‘war of attrition’ online, bypassing the monitoring tools and striving to maintain a presence.

Variety of format vs. static productions

In its strategy to target diverse audiences, Islamic State and its supporters have developed a wide variety of formats (recordings, videos, nasheeds, posters, infographics, communiqués, magazines, weekly letters). Within this content, IS exploits a varied iconography and rhetoric mobilising attractive and repulsive factors to attract people to the jihad. Al-Qaeda’s videos are generally more static, discursive and cerebral, with few choreographic effects, with a few exceptions, and where the emotional aspect is less solicited. Its approach remains more political, with regular attempts to rally, even in the West, the sympathy of certain minorities.

The mediatisation of extreme violence

In terms of content, one of the major differences between IS and AQ remains the former’s glorification of extreme violence. One of the initial discrepancies between AQ and its Iraqi offshoot dates from the mid-2000s when the Tawhid wal-Jihad group, a former IS avatar, carried out and then ended up publicising attacks against Shia communities or against Sunnis accused of cooperating with the Iraqi government. Tawhid wal-Jihad leader Zarqawi’s strategy was well thought out: the actions against the Shias in particular, and then their media coverage, aimed to amplify the sectarian strife in Iraq between Shias and Sunnis by radicalising the Shias and thus provoking a reaction or overreaction on their part against the Sunnis. In doing so, they intended to push the latter to support radical Sunni groups who would become the ultimate protector. Alternating between claiming and not claiming its actions, the group ended up claiming everything in 2007 when the window of acceptability of this ultra-violence had widened. AQ, from that point on, rejected and condemned this targeting, fearing that it would alienate Muslim populations in the face of extreme violence.

The volume of IS propaganda content, their extreme violence (and its corollaries: the trivialisation of this violence, its mimetic potential, the offence to the memory of the victims, etc.), the group’s massive effort in digital technology, its violent actions, particularly in the West, and their media coverage have prioritised the fight against IS content online, relegating AQ’s to the background. AQ has thus relied on a long-term strategy online, without giving in to the emulation of IS propaganda. Its media products also are on a ‘longer cycle’, with much less regularity than IS’s but maintaining the brand in the long term.

In a second phase, however, the progress of the intervention against IS content has extended to AQ’s. Nevertheless, the group has managed to show digital resilience by decentralising its content on platforms that the organisation deems ‘stable’, the same way as IS. Currently, AQ’s Rocketchat server, launched in December 2019 following Europol’s operation against jihadist content on Telegram, remains one of its most stable distribution platforms with over 2,300 members.

Looking Ahead, Some of the Challenges to AQ’s Survival are Reflected in its Propaganda

While AQ has become a decentralised organisation over the past 20 years, with subsidiaries that constitute as many nerve centers, the group is faced with several challenges. The first one is to maintain a strategic coherence, a ‘brand’ homogeneity, and avoid the crumbling or secession of its subsidiaries or emanations (as was the case for IS and for Hayat Tahrir al-Sham). The second challenge is to maintain coherent messages and discourse between the different subsidiaries. The third is to keep its priorities aligned with regard to the enemy, whether near or far, and know how to ‘balance’ local priorities with international ones. These three challenges are regularly tackled in propaganda. In terms of branding, each of the group’s videos begins with credits displaying the logos of the four main affiliates (JNIM, AQIM, AQAP, and al-Shabaab) as well as the central AQ logo in order to clearly tie these videos into the overall AQ branding. 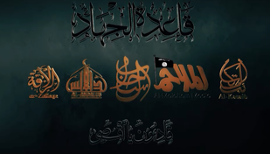 Moreover, the presence of all official (and affiliated) AQ media on the same platform (e.g. Rocketchat) illustrates the desire to give coherence to this media fragmentation.  For the past two years or so, the establishment of an unofficial media foundation linked to AQ, the Thabat agency, which publishes communiqués concerning all the group’s affiliates, is reminiscent of the ‘federating’ use of the Amaq agency by IS.  Finally, in terms of messages, there is a recurrent resonance between the different publications of these subsidiaries: congratulations to the actions of another subsidiary, for example, or the repetition of a statement on a more global theme (such as the recent congratulations addressed to the Taliban).

In recent years, both IS and AQ propaganda has been weakened in terms of production quantity and quality, as well as in terms of distribution. Nevertheless, while IS propaganda has made the headlines over several years, AQ’s digital strategy, like its overall strategy, is more long-term, seeking stability and endurance. 20 years after 9/11, AQ media still has an echo and an influence. The Taliban rise to power in the recent weeks provided an opportunity for AQ to congratulate them and showcase the ‘endurance strategy’, generating a surge in publications and statements.  Moreover, in recent weeks, there has also been a surge of content produced by several AQ affiliated media foundations reminiscent of the IS ‘affiliated media’ or ‘sympathisers’ model. It is nonetheless too early to say whether this is a shift or a short-term trend.