On 1 April 2021, the French security service of the Direction Générale de la Sécurité Intérieure (DGSI) received an urgent alert from its Moroccan counterpart of the Direction Générale de Surveillance du Territoire (DGST) warning of imminent attacks to be conducted against churches in the South of France on Easter day. The suspect, an 18-year-old woman from the Southern city of Béziers, was believed to be planning her actions in coordination with elements identified with Islamic State (IS). Three days later, policemen and tactical units of the National Police’s RAID arrested Leila B. at her home. The notebook the detectives found in her room revealed her rather atypical profile. Along the pages, surahs relating to jihad and illustrations of IS executioners holding decapitated heads interlaced with swastikas and sketches of Nazi soldiers, illustrating a fascination for extreme violence rather than adhesion to one ideology in particular. The case of Leila B. is not unique. In the past, several individuals transited from neo-Nazism to Salafi-Jihadism, or simultaneously adopted both, and it seems that the tendency of certain individuals to adhere to different – and sometimes contradictory – ideologies increasingly appear as a tangible threat. In a hearing before the Senate Homeland Security Committee in September 2020, FBI Director Christopher Wray labelled this trend “salad bar” ideologies, arguing that some violent extremists may have mixed ideological beliefs resulting in a lack of clearly defined motives besides attraction to violence. In recent years, these hodgepodges of extreme ideologies gained visibility in far-right circles, notably online. In particular, images glorifying Salafi-Jihadi representations emerged in neo-Nazi channels, revealing the connections between seemingly conflicting ideologies. This Insight will provide selected examples of images displaying Salafi-Jihadi representations circulating in neo-Nazi social media channels and will dissect the factors allowing for their existence. It will then propose an assessment of the potential implications of their dissemination on the dynamics of radicalisation.

The various attacks committed by far-right and Salafi-Jihadi supporters in Western countries in recent years spurred scholars in the field of terrorism studies seeking to comprehend the relations between these ideologies. The literature that emerged identified several commonalities that may favour ideological convergence. First, Salafi-Jihadis and neo-Nazis are totalitarian movements that provide their followers with similar cognitive frameworks, embracing a Manichean perception of the world that divides humanity unambiguously between ‘good’ and ‘evil’. They thus gear up their supporters with a clear set of principles designed to depict the world in an absolute manner, suppressing the nuances in differentiating what is right from what is wrong. These movements are also characterised by their extreme violence and have revolutionary aspirations, seeking to replace existing regimes with new orders based on religious or racial particularities. They are highly structured around clearly defined in-groups and out-groups and both Salafi-Jihadism and neo-Nazis display a profound and virulent hatred towards Jews, which often appear through antisemitic conspiracy theories accusing them of controlling world governments. Moreover, both currents strictly enforce gender roles, which often appears as a central concern. J.M Berger notes that while men generally hold key functions within far-right and Salafi-Jihadi movements, women, despite being involved at various levels, are often marginalised and relegated to non-violent tasks, where their reproductive function is usually regarded as an essential contribution to the cause. Neo-Nazi and Salafi-Jihadi views towards homosexuality converge as well. Islamic State punished homosexuality in its ranks by stoning gay men or throwing them from the top of buildings while deviations from cisgender heterosexuality are often persecuted in far-right circles, the most tragic example of which being the persecution and extermination of homosexuals under the Nazi regime. Thus, despite apparent differences, Salafi-Jihadism and neo-Nazism present several commonalities that define them both as reactionary and revolutionary movements that function through similar cognitive frameworks. In fact, these shared characteristics laid the groundwork for several individuals who shifted from neo-Nazism to Salafi-Jihadism, prompting researchers Daveed Gartenstein-Ross and Madeleine Blackman to advocate for fringe fluidity – the transition from one form of extremism to the other – to be considered as a specific radicalisation pathway. Some far-right extremists have also expressed admiration for jihadi groups and have sought operational knowledge from jihadi sources on occasions. Moreover, it seems that these similarities are reflected in their propaganda as well. Journalist Bridget Johnson shows through specific examples collected online that neo-Nazi and Salafi-Jihadi propaganda presents striking aesthetic and rhetorical resemblance.

In recent years, some neo-Nazi groups have visually materialised this ideological convergence by glorifying Salafi-Jihadi representations in their online communication. For instance, Ben Makuch and Mack Lamoureux revealed in 2019 that the neo-Nazi group Atomwaffen Division, and its Canadian propagandist ‘Dark Foreigner’, created an image eulogising al-Qaeda’s former leader Osama Bin Laden. In June that year, the same group published a stylised picture of jihadists in a post entitled ‘The Islamic Example’ depicting Salafi-Jihadi’s culture of martyrdom as something to hail and replicate in neo-Nazi movements. Similar images have been circulating since then in neo-Nazi channels on social media. Recently, a ‘BASED Jihadist terrorwave advanced pack’ list spread in neo-Nazi canals online, encouraging followers to include a copy of Adolf Hitler’s ‘Mein Kampf’ and a copy of the Quran in their package (see Figure 1), thus clearly asserting the ideological convergence between neo-Nazism and Salafi-Jihadism. Another image from 2020 (see Figure 2) further illustrates that trend, showing a Sonnenrad, an antique European symbol appropriated by the Nazis and neo-Nazis, against a black background with a white text of the Islamic creed Shahada reminding of the black banner often used by jihadi groups. The growing neo-Nazi group Pax Aryana also produced glorifying jihadi-inspired images. In June 2021, a hyper-stylised image of a jihadi fighter pointing a finger upward, representing tawhid – the unity of God in Islam, customised with neo-Nazi symbols circulated in channels identified with the group (see Figure 3). The jihadist is represented harbouring the group’s symbol on a headband and wearing a skull mask, an accessory that became popular in far-right circles in 2016. He is also surrounded by Wolfsangels, an ancient runic symbol that was part of several divisional insignias of Nazi Germany’s Waffen-SS and that is very popular among neo-Nazis today. Other images circulating in far-right channels display Salafi-Jihadi representations to enhance their support for terrorism. One example shows Osama Bin Laden in a stylised fashion with an inscription inciting followers to “open [their] heart to terror” accompanied by a Shahada (see Figure 4). In another image, an Islamic State fighter is represented with the flag of the organisation in the background, accompanied by a mention explicitly expressing support for “any form of terrorism” (see Figure 5). Similar pictures identified with the Order of Nine Angles (O9A), a neo-Nazi group that allegedly expressed admiration for al-Qaeda and Osama Bin Laden in the past, were circulated in neo-Nazi channels as well (see Figures 6 and 7).

It seems that the use of jihadi representations in the visual communication of some neo-Nazis groups is not only meant to convey their ideological convergence and a certain esteem for the Salafi-Jihadi movement. It also intends to enhance their message promoting terrorism and further incite followers to extreme violence. The dissemination of such content may result in consequences on radicalisation dynamics. In a recent study, Stephane J. Baele, Katharine A. Boyd, and Travis G. Coan, proposed a conceptual framework for the study of the visual aspects of extremist propaganda. Positing images as amplifiers of narratives and emotions, they suggest that pictures can influence target audiences by strengthening positive in-group and negative out-group identity while cementing the construction of crisis and/or solution narratives advocated by the group. Therefore, images, they contend, further enhance what Haroro J. Ingram defined as a “cyclical cognitive reinforcement” process, that is the repeated association of out-group with crisis constructs and in-group with solution constructs in a self-reinforcing cycle that solidify dichotomous identity structures. The in-group is then increasingly perceived as the source of solutions while the out-group is progressively seen as the origin of the crisis, thus increasing the likelihood of radicalisation. The use of glorifying Salafi-Jihadi representations in neo-Nazi online circles, accompanied with explicit calls for terrorism, hence may participate in the construction of ‘solution’ narratives through the diffusion of ‘positive’ emotions such as pride, admiration, and the perspective of hope emerging from violence. This could in turn further fuel radicalisation among individuals who, like Leila B., are inclined to violence and sensitive to the factors allowing ideological convergence between neo-Nazism and Salafi-Jihadism. Furthermore, it seems reasonable to suggest that repetitive use of such representations may normalise the existence of a pathway between neo-Nazism and Salafi-Jihadism overtime, opening the way for the idea of ideological convergence to potentially gain traction in some neo-Nazi online communities.

These observations, however, do not imply any prevalence of glorifying Salafi-Jihadi representations in the visual propaganda circulating in neo-Nazi channels online. Neo-Nazism and Salafi-Jihadism are distinct ideologies and the convergence between them exists primarily at the margins of far-right communities. Much more research is needed to fully grasp the origins, extent, and potential implications of this trend. By connecting the fringes of these ideologies and visually materialising their convergence in the online space, these images open nonetheless new possibilities for the study and comprehension of violent extremist propaganda and its impacts on the dynamics of radicalisation. In a time when ‘salad bar’ ideologies appear as an increasingly credible threat, this is certainly a trend to monitor and investigate further. 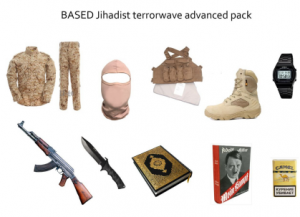 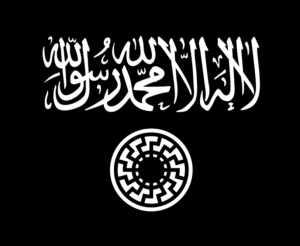 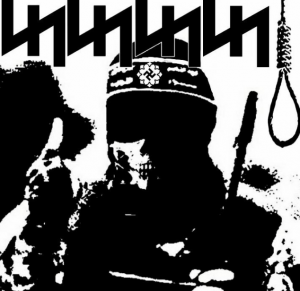 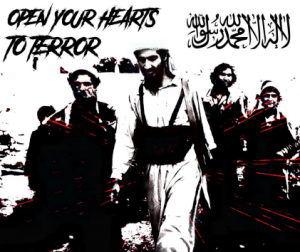 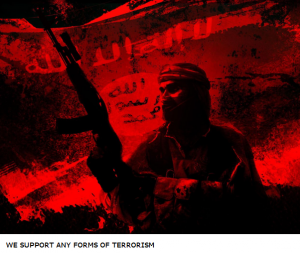 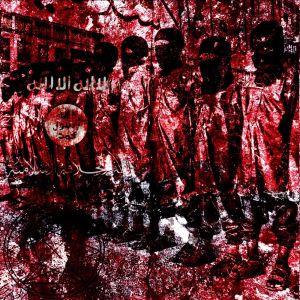 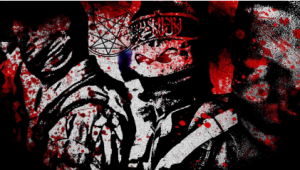