On 21 July 2020, Twitter Safety announced that they will be taking a stronger enforcement against “behavior that has the potential to lead to offline harm” and decided that Twitter would no longer serve QAnon content in trends, not highlight QAnon content in searches and block QAnon URLs on the platform. On 19 August 2020, Facebook updated their policies to address movements and organisations tied to violence, to address the growing threat posed by QAnon and similar movements. Following these policy changes and their impact on the QAnon community’s capacity to spread propaganda and recruit new members, QAnon decided to hijack “left-wing” hashtags on Twitter to circumvent their new policies. The impact of this was QAnon took over #SaveTheChildren, which was trending in July due to their awareness raising campaign. This led the QAnon ideology to bleed into new digital ecosystems and form new radicalisation pipelines. The consequence was the explosion of a phenomenon I have called Pastel QAnon. 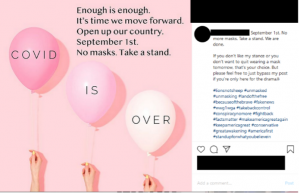 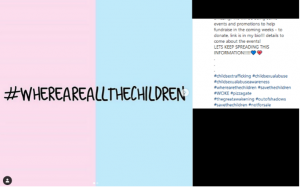 Pastel QAnon refers to the community of female influencers initially found on Instagram, but now present across multiple platforms (MeWe, Telegram, Parler, Gab, etc.). Many began as lifestyle bloggers, fitness instructors, diet influencers, esoteric spiritualists or promoters of alternative healing. The “Pastel” refers to the unique aesthetic and branding these influencers provided to their pages and in turn QAnon by using social media templates like Canva. Aesthetically, Canva is a popular option for Instagram influencers for developing a brand. Canva was ultimately used to soften the messages from QAnon that was shared on these pages, which could be subtle or not so much. Sometimes the QAnon content is not in the images but in the message alongside the post. Albums are another branding trick that are used to maintain page aesthetic, which also serves as a camouflage for those who are not followers or just browsing their page. The QAnon content is at times hidden a few pictures into the albums. The aesthetic and branding created by these influencers softens QAnon’s propaganda grounded in Chan culture and imagery. The Pastel aesthetic is the polar opposite of the “raw” QAnon content that would be found on 8kun. In softening QAnon propaganda, the Pastel QAnon community creates new recruitment and radicalisation pipelines into female dominated ecosystems. Not every post these influencers shared were slathered with QAnon hashtags or propaganda, rather it is dispersed among their other content and brand.

Using a sample of 76 influencers in the Pastel QAnon community (with a total of 2,700,000 followers), here is a breakdown of the type of accounts that are found in this analysis:

The initial attempt to regulate QAnon by the platforms, the hijacking of #SaveTheChildren by QAnon, and the anti-child trafficking propaganda associated the #SaveTheChildren, which initially pilled these influencers, morphed into #SaveOurChildren, which lead to global protests against child trafficking and played an important role in sustaining the Pastel QAnon community in its initial growing pains. Female influencers in QAnon also played a role in connecting Pastel QAnon with the wider QAnon community. To that end Pastel QAnon also adapted their narratives to spread QAnon propaganda related to the 2020 US general election.

All of these factors gave Pastel QAnon an important role in radicalising not only other women, but also a younger audience who were likely not familiar with QAnon prior to summer of 2020. Pastel QAnon influencers are quite protective of their brands—as they took years of hard work to build in many cases—therefore they shared QAnon propaganda and narratives via their Instagram stories or by using the page highlight feature. Their Instagram stories paint a picture of women who have been fully pilled on QAnon as they shared and promoted QAnon documentaries like “Fall of the Cabal” and “Out of Shadows”, as well as posts from QAnon influencers. What my research highlights, is that behind the branding and soft colours lies the QAnon we all know, along with all it entails: racism, medical/COVID disinformation, and violence.

What is of concern is how quickly Pastel QAnon grew and how these influencers were able to not only maintain their brand but continue to grow it- promoting an extremist ideology like QAnon did not negatively impact their brand.

Using Instagram data—made available via Crowdtangle— I can provide a snapshot of the growth of the community from the start of the pandemic in March 2020 up to September 2020.

In total these 76 accounts had accumulated 2,700,000 followers during the collections period, which is an increase of 160% or 1,600,000 followers. Follower increase saw three spikes: one between 15 March and 18 April (start of the pandemic), one 31 May to 6 June (popularity of Plandemic with the anti-vaccine community, which was promoted by QAnon) and another 5 July to 29 August (save the children take over). The spike of 432K followers that occurred 30 August to 5 September is due to the creation of new accounts following QAnon account bans by Instagram. 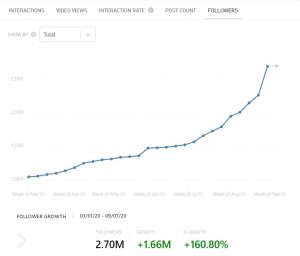 During the collection period these accounts shared 22.1K posts (averaging 770 a week), these posts had garnered a total of 21.04M interactions.  The week of 17 May is when these accounts initially became more active which aligns with the start of the COVID-19 pandemic. An important feature of this community it the important role videos play. There were 12,300 posts with videos that had garnered 76.84M views. Of note, videos gain in prominence around the week of 21 June when platforms began to introduce more friction between QAnon and platform users. For some in the community videos and IGTV are a way to avoid censorship. The Pastel QAnon community also use Instagram stories, highlights and live videos, to circumvent platform policies when they shared content related to QAnon. 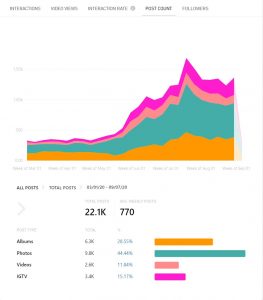 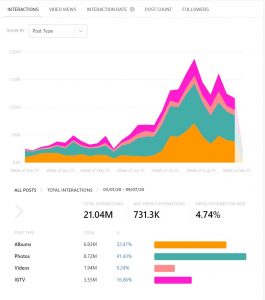 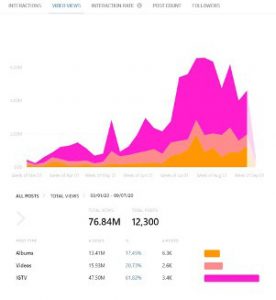 What an analysis of these accounts determined is that the majority of these women built their followings and businesses prior to getting pilled on QAnon. They had a fair amount of influence over those who follow them for their spiritual, health, fitness and business advice. Consequently, prior to June 2020, most of these accounts, don’t appear to have been interacting with each other, and prior to 2020 there was no QAnon content on most of these accounts. Additional to the actions taken by Facebook and Twitter in June and July 2020 against QAnon, the viral child trafficking conspiracy theories like Wayfare, the revival of Pizzagate on TikTok, the anti-COVID and vaccine conspiracy theories created new networks, which came together in August 2020 when QAnon accounts hijacked #SaveTheChildren, when QAnon accounts and narratives came into contact with Instagram influencers that were championing the save the children campaign as part of their brand. Additionally, many of these accounts were already anti-vaccine and did not believe COVID-19 was as bad as the media made it out to be. Thus, they were already part of a disinformation and conspiracy ecosystem.

In practice, outside of the pure QAnon accounts, the other Instagram accounts that have been radicalised onto QAnon have brought their branding, aesthetic visuals, militant and organised advocacy, and their networks (which are fairly large and unpilled). This has brought new influencers on the scene to translate QAnon narratives and conspiracies via their anti-child trafficking narratives that were shared across 2,700,000 followers. In some cases, you could tell off the bat what these accounts believe, in many you could not tell these were QAnon or QAnon adjacent accounts unless you followed them and watched their highlights, lives and stories. Others used branding and aesthetics to hide QAnon propaganda or they used third-party technologies like Linktree, to share links that are banned by Facebook and Instagram, among their links to partners they are doing business with or to their own online shops.

The policies of both platforms and governments need to take into consideration the gender dimension of extremist movements like QAnon. In the case of Pastel QAnon, this community presents new radicalisation pipelines and vectors that are not part of existing policy and prevention toolkits. As we will see in upcoming pieces, these initial radicalisation pipelines are important in prevention efforts, as women play an important role in QAnon-related violence and criminality, which cannot be overlooked.