In my previous GNET Insight, I focused on the ideological collision between anti-5G, the coronavirus, and the far-right. The present discussion will extend this exploration further, examining critical infrastructure, and the proliferation of attack incitement through clever turns of phrase.

Amongst the diverse milieu which constitutes the far-right, some understand attacks targeting infrastructure as part of a wider strategy to overwhelm and misdirect police and intelligence resources. As one lengthy, anonymous tirade posted to Telegram states:

“We filled the System’s crosshairs with trash, making them unable to focus on a single target, making infrastructure attacks like the ones in Tennessee and Aspen this week, as well as the ones on 5G towers over the past year impossible to thwart.”

This posting was shared with at least eight far-right Telegram channels, most of which were removed in the mid-January 2021 purge of dozens of channels. On the polar opposite to neo-Nazi rightists, the intentionally-self mocking image below shows a collage of anti-civilization-focused anarchist tropes including, “Let’s go burn down 5G towers,” a nod to the fusing of an anti-infrastructural politic along with elements of a luddite, anti-capitalist, insurrectionary-leftist framework. 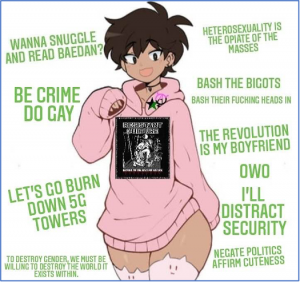 Within the insurrectionary left and portions of the accelerationist right, attacks targeting infrastructure are a mainstay including those targeting trains (second example), electrical systems (second example, third example, fourth example), gas delivery systems (second example), and hospitals. Anti-authoritarian and anti-Statist leftist movements of a variety of natures have featured infrastructure mapping and sabotage-centric guides for decades (modern example |  historical example), and while leftist sabotage shares some elements with actions carried out by rightists, they are essential differences.

Though attacks may appear comparable when examining the results—burned communications towers and stalled trains—these strikes serve different functions and are spoken of in distinctive terms. Often times within far-right forums, reports of incidents are shared with a presumed approval, such as the posting below, which chronicles an incident with the caption, “Someone attacking the infrastructure?” 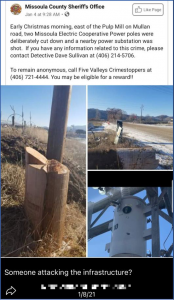 Further, a litany of recent far-right plots have focused on harming key infrastructure. A Missouri man who planned to attack a hospital was killed by FBI agents after he posted plans on Telegram, suggesting the attack was part of a wider accelerationist copycat echo chamber. Other attackers, such as the former Canadian soldier connected to neo-Nazi accelerationists The Base, sought to derail trains, poison water supplies, and open fire at a gun rights rally to trigger civil war. A Gab post by an alleged Base member spoke of attacking the “electrical grid” according to the ADL. Atomwaffen Division reportedly plotted to attack the electric grid and nuclear power plants, and in January 2021, a former US marine (and presumed Base member) was implicated in a plan to targeting water and electric facilities. Outside the US, similarly-styled, eco-centric, accelerationist far-rightists have plotted to murder judicial officials and bomb reproductive healthcare centers.

Many Telegram exchanges showcases the desire to attack electrical infrastructure. For example, in one now offline forum, a February 2020 exchange demonstrates this discourse. First, a channel moderator posts: “At this point the waiting and capitulation is getting to the point of laziness, if you aren’t doing your part what the fuck are you doing.” Another user responds, posting:

Minutes later, a third author writes, “Hey kid, you know only about ~17% of arson cases are solved?,” answered by the original poster:

The rhetoric escalates: “Imagine if someone opened fire on a nitrogen based fertilizer plant with incendiary rounds.” Such comments demonstrate a common delivery style within the “Terrorgram” community, inciting attacks through faux warnings. In the context of COVID-19 restrictions, a user posts:

The instruction and encouragement to attack, cloaked in faux-warnings, offers ideas and inspiration to potential saboteurs. 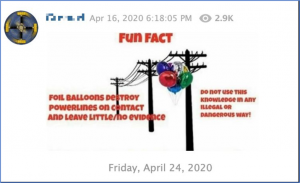 Comments on real-world sabotage reports provide more scenarios, made hyper-poignant in the wake of the pandemic. Linking to an article reporting ambulance sabotage, the poster writes, “definitely don’t do this,” glibly encouraging just the opposite. 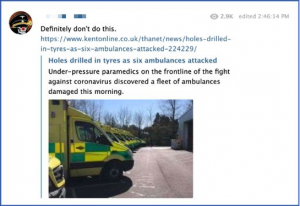 Telegram is a particular site for sharing such rhetoric (less so after a mid-January 2021 purge of many far-right channels), but other rightist favourites such as Parler post similar content, which can be seen in the reply below: 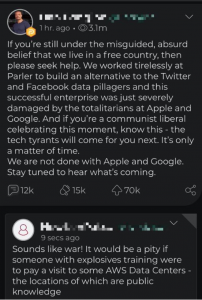 ‘I hear some people are…’

This tongue-in-cheek tone is recurrent in the accelerationist lexicon. In his book Harassment Architecture, a frequent addition to “required reading” lists for accelerationists, author Mike Ma employs this same approach. In the passage below (pages 93-95), Ma advocates for not only unbridled mass shootings, but suicide bombings targeting power stations, using the parenthetical aside to imply the faux warning method. 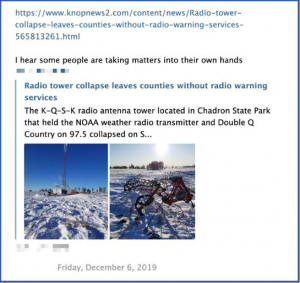 I hear some people are buying extension ladders, going up on various store roofs, and pulling the disconnects on their heating and cooling devices…buying tennis rackets and hitting medium-sized pebbles into wealthy and ethnic neighbourhoods, from extremely far distances away. I hear some of the pebbles are smashing Escalade sunroofs, McMansion mega bay windows, and more. I hear nobody can figure out where it’s coming from…buying machetes in bulk and leaving them next to the homeless while they sleep…learning how to build handheld EMPs on the internet and shutting off people’s electronics in secret…buying burner phones and calling ambulances to places, over and over…throwing screws in news station parking lots…getting jobs and immediately quitting…feeding journalists completely false stories and making them look bad…putting caution tape across busy streets and highways…running through car dealerships and smashing the windshield out of everyone on the lot at night I hear some people are hiding bluetooth speakers in places and broadcasting racial slurs at full volume…making homemade explosives and knocking down cell towers…making homemade explosives and disintegrating local power substations…stealing construction machines and driving them into lakes.

These sarcastic, tongue-in-cheek warnings clearly identify and advocate pathways towards violence, it is clear that far-right accelerationists and adjacent elements (such as boogalooers) are parroting the call.

Not only are calls to ‘Read Harassment Architecture’ frequently circulated online (alongside calls to ‘Read Siege’), the explicit recombination of accelerationist neo-Nazi activism and Ma’s text are frequently repackaged in memes. 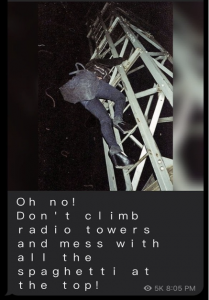 Whether telling people not to fill cement cracks with explosives, or not to fire incendiaries into electrical infrastructure, the cumulative effect is a collective anti-social brainstorm—an ever-growing list of ways to foster, perpetuate, and extend chaotic disorder. This is not unlike the fictional proto-fascist patriarchal army Project Mayhem that attacked modern civilization through vandalism and sabotage, reconstructing the image of ‘manliness’ from passive consumer to violent survivalist. These fictionalised, nihilistic, violence-centric cells thrust into the popular imaginary with the 1999 film Fight Club may have a new generation of consumers, as the author has recently expanded upon these plot lines in a series of graphic (2016) novels (2019). Further exploration into the texts constructing today’s fascist imaginary is essential if scholars and policy makers seek to keep pace with its ideological and aesthetic transformations.

The targeting of critical infrastructure, and the glib and more sinister glorifications of such acts is not new, nor confined to the discourses of the far-right. While, for example, both anti-civ/deep green/eco-defensive anarchists and eco-fascists may encourage targeting communications infrastructure, they do so with decidedly different aims and revolutionary visions. Distinguishing these tendencies is leftists’ use of the spectacle of sabotage as a practical and communicative means—channeling critical analysis in written communiques circulated through digital communities.

These left-aligned attacks rarely target humans, and loss of life is exceedingly rare, and typified in isolated, disconnected, non-movement-aligned individuals such as Theodore Kaczynski or James Lee. Insurrectionary anarchists, the Earth Liberation Front, Earth First!, and other elements of the left known to target infrastructure, promote attack as a form of economic sabotage, and as a means to circulate their criticism in written form.

These attacks function differently for the right. While rightist discourses often encourage and celebrate these anti-infrastructure attacks, frequently implying that the acts were carried out by members of their ideological community, there are rarely claims of responsibility. Even amongst eco-fascist and explicitly accelerationist groups (e.g., The Green Brigade, Greenline Front) or individuals, I am not aware of any which centre around claims of responsibility akin to insurrectionary/anarchist, animal liberation, or eco-direct action movements of the left have historically fostered as central. In this manner, as I have argued before, insurrectionary and other anti-system leftist violence typically seeks to communicate through the spectacle of action rather than seeking to inspire fear through lethality. 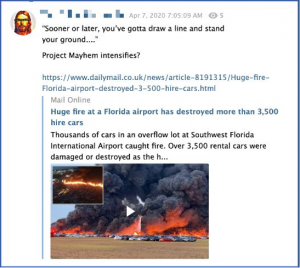 Chaos-centric incitement within accelerationist far-right texts seeks to foster intimidating and terrorising violence. This communicative goal is an essential element in fascism dating back to Mussolini. The idea of causing blackouts, adding explosive grout in roadwork, or the litany of suggestions in Harassment Architecture, epitomise the nihilistically-suicidal nature of fascist-inspired ideologies. Understanding the divergent motives between those who sabotage infrastructure is essential for mapping, and ideally transforming the historical, socio-political realities which reproduce inequities and lead to violent responses. While both leftist and rightist violence can be criminal and disruptive, the underlying conflicts they speak to, prefigurative futures they point to, and the communities they represent are fundamentally different.