On 25 December 2020, as most Christians were celebrating with their families, a 63-year-old, white male, and longtime resident of his community, detonated a vehicle borne improvised explosive device (VBIED) in downtown Nashville, Tennessee. The mayor called the incident, “an attack on infrastructure,” a conclusion repeated by Representative Jim Cooper.

The explosion destroyed vehicles, and damaged 41 businesses, including an AT&T service hub, resulting in outages focused in Tennessee’s middle 41 counties. The facility’s backup generators failed, and outages were reported in a range of networks, including both cellular and landline telephones, as well as television systems. Internet service was disrupted in Tennessee, Kentucky, and Alabama, and led to failures of regional 9-1-1 call centres, non-emergency municipal services, the Nashville COVID-19 hotline, Memphis air traffic control, and the telephone networks of areas hospitals. Planes were grounded from Nashville International Airport for a time, and other cellular networks such as T-Mobile experienced domino effects, resulting in failure. The explosion also contributed to outages at ATMs and credit card point-of-sale terminals, yet according to AT&T, 65% of service was restored two days later.

While the exact motives of the Nashville bomber remain unclear—despite reports that he authored and mailed a manifesto of sorts—many on both the left and the right have presumed that the proximity of the bomb to the AT&T facility indicated that the target of the attack was the communications network, and its 5G services specially. Tennessee has experienced an atypically high occurrence of anti-5G crime, including numerous tower arsons as well as the “first 5G physical attacks in America.” According to one report, the Nashville bomber believed that 5G technology had caused not only his own father’s dementia, but also other deaths regionally. FBI agents investigating the bombing have reportedly asked associates of the bomber if he was “paranoid about 5G technology,” and this presumed motive has been routinely repeated by media in the post-attack reporting.

The presumed connection between the bomber’s motive and criticism of 5G are recurrent in a host of far-right channels. A search of “5G” within the Telegram far-right network yields hundreds of recent posts to demonstrate. Quickly following the Nashville bombing, far-right networks repeated the presumed anti-5G motive, through neo-Nazi aggregator sites like the Daily Stormer. 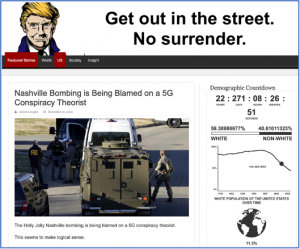 The roots of the presumed 5G-coronavirus connection seem to be a January 2020 newspaper interview with Kris Van Kerckhoven, a Belgium doctor, who authored an article headlined, “5G is life-threatening, and no one knows it.” These comments were quickly circulated throughout digital networks—Facebook and YouTube chiefly—of conspiracy-minded individuals, and although the article was removed by the publisher, the damage had already been done. While these beliefs were originally restricted to the so-called dark corners of internet discourse, they were provided a quick accelerant when repeated by celebrities including Amir Khan, Woody Harrelson, Jason Gardiner, Keri Hilson, and Amanda Holden.

Since its humble Belgium origins, the discourse on the 5G-COVID connection has become a rapidly common refrain within far-right channels who imply or explicitly claim the connection. Even some State actors have stepping into this role, with the Russian-controlled RT America network speaking of a “5G Apocalypse” linking the technology to brain cancer, infertility, autism, and Alzheimer’s disease. English conspiracy theorist David Icke has played a role here, producing videos explaining the conspiratorial connections. 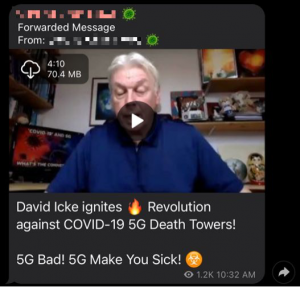 In the video below, the connection is made even stronger. In the 4-minute video shared widely in far-right forums, COVID testing methods are challenged, and it states “the geographical locations experiencing the most cases of COVID, also seem to have active 5G technology.” The video claims that 5G, unlike prior cellular technology, allows its transmissions to “penetrate the nucleus of a cell” modifying DNA through an electromagnetic field, and references Icke’s video for further substantiation. 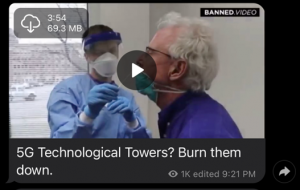 There are entire channels dedicated to this sort of quasi-scientific analysis, many of which overlap with far-right themes including anti-lockdown networks, boogaloo advocates, and the wider ‘stop the steal’ (a reference to the 2020 Trump-Biden election results), and Make America Great Again movements.

Attacks targeting communications infrastructure have been a constant long before suspicions surrounding 5G were raised. In Western Europe, attacks focused on damaging and disrupting the cellular and 5G networks have occurred recently in Germany, France, Italy, Belgium, Cyprus, Sweden, Finland, the Netherlands (additional report here) and the UK (claims of responsibility here, here and here), the majority of which were claimed by anarchists exposing an insurrectionary, neo-luddite, or anti-capitalist rationale. 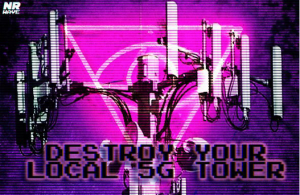 The scale of these vandalisms appears vast, with UK and Dutch authorities reporting nearly 200 attacks in their territories, including 80 attacks on towers, and 100 “additional incidents” throughout the first half of 2020. These “other incidents” include harassment of workers and the placement of razor blades and needles behind poles to injure workers. Additional reporting indicates more than 140 arson attacks targeting 5G networks have occurred in Europe throughout 10 countries. 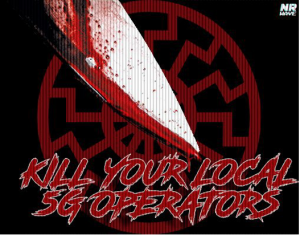 Other reporting claims “more than 200 incidents of abuse against telecom engineers” and more than 90 arsons, between April and May 2020. Whatever the final tally of incidents is, these attacks are far from uncommon. During the 2020 Easter weekend, at least 20 UK phone masts were targeted for arson. Attacks targeting cellular (including 5G) infrastructure have also occurred in North America (see incidents in Mexico and Canada), though with far less frequency, and appear less tied to COVID-19-linked beliefs.

While some attacks may well have emerged from far-right accelerationist motives, at the time, little evidence exists, and no claims of responsibility could be readily located. As early as May 2020, the DHS warned the telecom industry about threats in the wake of frequent attacks in Europe. According to reports, anti-5G strikes were catalysed by the claim that the technology helps to spread coronavirus. The DHS has issued brief publications to help dispel this belief, as did FEMA, who established an online Coronavirus Rumor Control site. 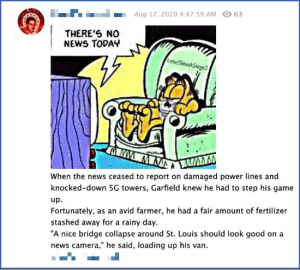 The accusations levied against 5G technology vary, but often are proximate to, or intertwined with right-tinged conspiracies focused on COVID-19, the vaccination program, fluoride, the ‘microchipping’ of the populace by individuals like Microsoft’s Bill Gates, the automation or technological domination of humankind through artificial intelligence, and so on. The collision of these ideas can be seen, in the sign shown below, repeated by a well-known Telegram channel: 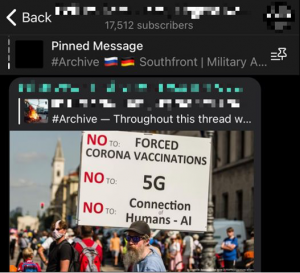 Similar notions of a universe of chaotic collisions between intersecting conspiracies can be seen in this particularly dystopian, post-collapse image, which was shared on several COVID-skeptical, far-right channels including that of the Proud Boys’ UK. 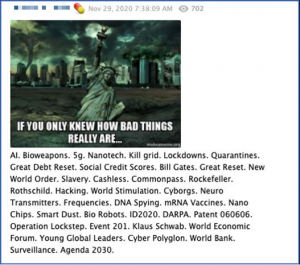 The New York Post screenshot below, shared on a far-right Telegram forum with the caption “5G rollout vs. Not”, implies that the lack of COVID outbreaks in Africa is due to the continent’s lack of 5G, implicitly connecting the two. 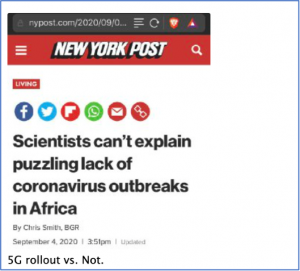 Examples of this presumed connect abound in far-right channels, many of which express an equal suspicion of other modes of industrialisation and technological advancement, levying accusations at a host of infrastructural targets.

As I have argued before, structural conflicts, reflected in economic, identity-based, and power inequities, combined with impending ecological and infrastructural crises, are likely to increase socio-political tensions in the coming years. These intersecting occurrences will exacerbate presently-understood inequalities, and likely lead to further precarity amongst a widening class of marginalised people. For those seeking to accelerate or advance these ruptures, attacks targeting critical infrastructure—including 5G and cellular networks—is an obvious target. The accelerationism-as-strategy framework advanced in often-circulated works by William Piece, James Mason, and newcomers such as Mike Ma, speak to this growing acceptance and embracing of such a strategy. In my next GNET Insight I will examine these counter-infrastructural strategies advocated by far-right and accelerationist networks.

The global health pandemic and the fear, insecurity, and anxieties it has fostered have added to these already primed communities, and have led some to direct their focus at new technological pursuits such as 5G. Such conspiratorial connections are certainly not new, nor is their emergence unexpected, but security policy must seek to understand, mitigate, and eventually remedy these underlying social, political, and economic tensions if policy makers hope to stem the tide of potential recruits and radicalised networks willing to risk life and liberty to damage a system they see as suicidal and contributing to the destruction of their nation, racial in-group, and communities.