Ashli Babbitt: A Far-Right Martyr of the Insurrection

By Marc-André Argentino and Adnan Raja

On 6 January, during the insurrection on Capitol Hill, Ashli Babbitt was fatally shot in the neck by Capitol police as she was trying to climb through a broken window into the Speaker’s lobby. Her death was part of a dark day for American democracy. Ashli Babbitt was a 14-year veteran of the Air Force, a mother, white and a QAnon adherent. In her death she has been called a crisis actor by QAnon; however, though the movement she followed has discarded her, other ideologically motivated violent extremists (IMVE) movements rapidly adopted her as a symbol of their cause.

In an article from Perspective on Terrorism, Ari Ben Am and Gabriel Weimann cover the role of martyrdom in far-right terrorism. They state that martyrdom plays an important role in the promotion of any ideology as martyrs act as symbols for ideological movements. Martyrs further become symbols that will motivate a movement or ideology towards action in the name of a martyr. Additionally, martyrs are a source of encouragement for action and unity due to the perceived sacrifice of the individual in the name of the ideology. Ben Am and Weimann highlight that martyrs serve as ideal promulgators of an ideology to be emulated, while also “humanizing” them, all the while “provid[ing] adherents of an extremist movement both a symbol and figurehead to refer to and justify the rightness of their ideology or movement both in the eyes of adherents and parts of a wider public.”

Martyrs are widely celebrated in the mythos and communities of IMVE actors, as individuals who are willing to sacrifice it all for their cause. Individuals like Dylan Roof, Timothy McVeigh, are perceived as “saints”, while other perceived “saints” have seen their manifestos raised to a holy text, for example Brenton Tarrant’s “The Great Replacement” or Andrei Breivik’s “2083 – A European Declaration of Independence”. These acts of martyrdom have inspired movements and violent acts, looking to emulate the martyr’s sacrifice. 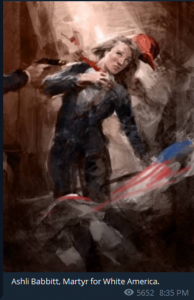 Fictional martyrs and martyr narratives also play a role in far-right martyrdom. Turner diaries according to J.M Berger “is arguably the most important single work of white nationalist propaganda in the English language”. The protagonist is celebrated as a hero and martyr, when his final act is the deciding factor in overthrowing the government. This is a point that Kathleen Belew brought up following the 6 January insurrection. As Belew explains ““The Turner Diaries” is a novel but it’s also a manual of operations and a cultural lodestar, or center point, for white power activists.”

In this manner, following the Capitol Hill insurrection, Ashli Babbitt has been made into a new martyr figure, not for QAnon, but for “white America”: White Power movements, National Socialist, Accelerationists, Boogaloo movements, Militias, Neo-Nazis, and others seeking to supplant the federal government. Initial campaigns to martyrise her appear to have sprung from the Proud Boys ecosystem as they rallied individual around the slogan “her name was Ashli Babbitt”, echoing the Black Lives Matter rallying cry “her name was Breonna Taylor”. This thematic of borrowing from the BLM movement spread across Terrorgram with other communities following suite. In one instance a White Power chat called Ashli the “the white man’s George Floyd”, she is to be a rallying call for the far-right “just like how BLM had everyone change their profile pictures to BLM, we need to see our symbol everywhere” says another.

This is exactly what was done. Overnight, logos, videos, icons and memes were created to immortalise Ashli Babbitt. In some instances she is being called a modern “Joan of Arc”, where she was portrayed in a painting echoing classical depictions of Joan of Arc. The most popular image circulating presently is a flag depicting “Ashli Babbitt the Martyr who was shot in the neck” (represented by the drop of blood). The 4 stars are for the 4 martyrs that were killed at the capital. In the background we have the capital building where it took place, also red with the blood that was spilled. 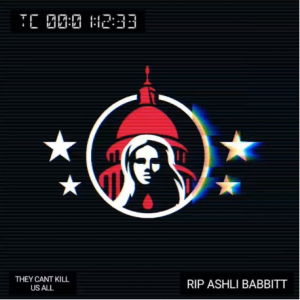 Her image and her death are being used as a rallying cry for retaliation and violent protests on 17 and 20 January all across the US based on online chatter from multiple different communities. There are discussion of “they cannot kill us all”, of vengeance for Ashli, of retaliation against the ZOG government who does not care about the lives of American, but only of “those” who line their pockets. As one user says “Her name was Ashli Babbitt, and the mistake the patriots at the capitol made was They didn’t go far enough.” However, it is difficult to determine how much of this is shitposting versus actual threats of violence, and presently it is near impossible to predict what will happen.

There is another side to the coin. In groups that are rooted in siege culture, in accelerationist ideals, and in the desire to take down the government, they are using the Ashli the martyr differently. They are using her to recruit new members with a different kind of message. They are warning their members to not attend any events on the 17 or 20 of January, as these are traps for mass arrests. Rather they warn their members to wait, stay the course, train, stockpile and wait for the right moment. They see current events as an upcoming inflection point. They are hoping for more censorship, for governments to overreact.

By waiting these groups see this an opportunity for them to recruit new members and sympathisers willing to join and fight. Symbolic representation of martyrs has been used as inspiration for violent attacks, hardening of intolerant ideologies and for the distinct purpose of perpetuating propagandistic ideas to recruit and propagate a groups world view. Ashli Babbitt’s rise to martyrdom in an effort to bolster their ranks may be a window into the future of white supremacist, IMVE groups, using tragedy and the nobility of white womenhood fighting for “liberty” to breathe new life into their violent and intolerant movement.