Australia, once touted as a model for a considered and sustainable approach to COVID-19 is now in an interesting position where some states have closed borders to each other whilst the federal government pleads for free-trade and free-movement, wanting to kick-start the economy to avoid the worst of the recession that has now hit the country. The state of Victoria is now in one of the world’s longest lockdowns, with Premier Daniel Andrews’ government creating different roadmaps to recovery for regional and metropolitan Melbourne where measures to combat the spread of COVID-19 has seen the implementation of restriction of movement, curfew, home-schooling and the mass closure of non-essential businesses.

Various social media platforms have proven to be effective in communicating displeasure around the ways in which the government has tackled the pandemic and there has been an increased active presence of right-wing groups calling for disobedience, encouraging mass protest and declaring so called ‘sovereign citizenship’.

This piece will look at the concern recently expressed by Australia’s Secret Intelligence Organisation (ASIO) on the rise of the far-right in Australia. First, it discusses some background to far-right groups in Australia before moving onto a discussion of the rise of QAnon and other right-wing and conspiracy groups on the back of COVID-19 restrictions.

Background to the Far-Right in Australia

The increased vocalism of far-right sentiments in Australia should not, by any means, be surprising to policymakers and government departments charged with the protection of national security. Australia has a long history of far-right movements, arguably dating back to 1901 when the newly federated Australia passed legislation called the Immigration Restriction Act (usually referred to as the White Australia Policy) which restricted immigration to mainly white European individuals, notably the UK.

Far-right groups in Australia have traditionally modelled themselves on UK and US examples such as the National Socialist Party of Australia and the similarly named Australia National Socialist Party mirroring the British National Labour Party. There has also been a very strong underlying link to Nazism and fascism in Australian political movements. Nazi Stützpunkt (stronghold/party branches) were established in the early 1930s as were Mussolini supporter groups. The 1940s witnessed the Australia First Movement created by writer and publisher Percy Stephensen whose members included Miles Franklin and noted suffragette Adela Pankhurst. The 1960s saw the creation of the Australian League of Rights which called for the occupation of mainstream political parties as a way of subverting values it believed worked against the everyday citizen. Contemporary neo-Nazi movements such as the Antipodean Resistance whose catchphrase is “We’re the Hitlers you’ve been waiting for” has affiliates in  The Lads Society whose focus is on National Socialism, noting convicted right-wing extremist Blair Cottrell, who is also a founding member of the United Patriots Front, itself a conglomerate of neo-Nazis and fundamentalist Christians. In addition, a strong skinhead culture has also been prevalent across Australia, such as the Australian chapter of the white supremacist group Blood and Honour Australia and Southern Cross Hammerskins who have held a music festival in Melbourne for at least ten years.

The Rise of QAnon in Australia

It is no surprise then that QAnon, jumping from both 4Chan and 8Chan, has seen opportunity in the growing mistrust of the government around the pandemic to plant its roots in sowing Australian right-wing extremism. Researcher Marc-André Argentino notes that QAnon’s following in Australia is one of the largest in the world, with SBS highlighting how agile QAnon has been in infiltrating the world of conspiracy to further its reach. QAnon has been able to tap into far-right bulletin boards and social media, using memes and various hashtags such as #plandemic #DayofFreedom, #freedom #defundthemedia and #thegreatawakening to encourage disobedience against the pandemic restrictions, calling for mass protests and the flooding of mainstream media outlets reporting on the virus with anti-government sentiments.

Interestingly, they appear to be attracting supporters linked to the liberation conspiracy movements such as sovereign citizen groups (SovCits) whose refusal to be fined or wear masks is linked to their belief in unlawful government restrictions, often citing that they are sovereign citizens who do not recognise the government as ‘natural people’. Social media platforms have proved to be advantageous for connecting groups to QAnon content and supporters, with new Facebook groups linked to QAnon arising during the pandemic- from Millions Rise for Australia recently taken down by Facebook to the Conscious Truth Network moderated by former Australian soldier James Bartolo who live streamed his arrest.

The Anti-Vax movement in Sydney, Melbourne and Brisbane attracted big crowds, as did physical and digital protests and new groups being created out of concern about 5G, thought to be part of a wider conspiracy to control the population, again linking with key QAnon sentiments and sometimes even sharing content highly specific to a US audience as a way of bolstering support. 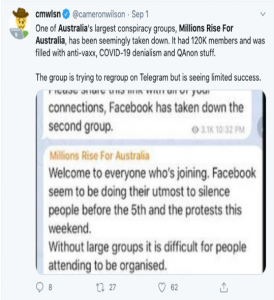 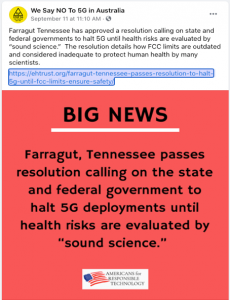 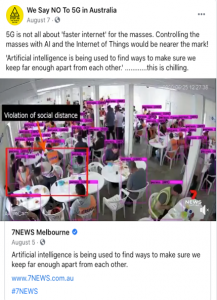 Recent Concerns and Focus by the Australian Government

In early March 2020, Australia’s Secret Intelligence Organisation (ASIO) declared that it had noticed an increase in far-right extremism with Mike Burgess, director general of ASIO noting “In suburbs around Australia, small cells regularly meet to salute Nazi flags, inspect weapons, train in combat and share their hateful ideology.” However, despite the strong presence of right-wing groups in Australia, and the increased presence on social media during the pandemic, Australia has not listed any right-wing extremists on its terror watch list – an anomaly when compared to other countries such as the US and the UK, and certainly the odd one out in the Five Eyes intelligence sharing network.

In September Senator Keneally spoke of the need to ensure that the Federal Parliament’s Intelligence and Security Committee reviewed the terrorist watch list with a view to ensuring inclusion of right-wing groups that should be seen as a domestic terrorist threat.  On 22 September, at a parliamentary inquiry, ASIO noted that far-right extremism actually accounts for nearly 40% of its caseload, a sizeable increase from the 15% it floated in 2016. Whilst there appears thus far to have been a reluctance to proscribe right-wing groups to the domestic terror register, the fact that Twitter permanently suspended a QAnon account belonging to an associate of Prime Minister Scott Morrison may force the government’s hand.