For the past six years, Islamic State’s media has awed potential recruits and shocked their enemies. The media has been abuzz over the years about the sophisticated and slick media output that the group has been able to produce, mostly with regards to their videos and their English language magazines, Dabiq and Rumiyah. Watching footage of late 2017’s “Flames of War II” from Al-Hayat, or this year’s nearly 53 minute documentary “To Be Absolved Before Your Lord” from Wilayah Yemen would draw the viewer into a world where lightning-fast cuts of combat footage and documentary-style storytelling are the norm.

Likewise, the anashid from Ajnad and Al-Hayat showcase audio that is cleanly recorded and mastered, while magazines like Dabiq and Rumiyah, along with their weekly Arabic-language newsletter Al-Naba show high-quality production values, modern and calligraphic fonts, glossy infographics, and the use of templates for a consistency in branding efforts.

This blog contribution analyses both the process and technology, both the software and hardware, that Islamic State has used since 2015, the date where editing software that they use is identifiable. As can be seen below, Islamic State media software, much like their camera equipment as pointed out by Yorck Beese, has not developed with Hollywood technology but with the home consumer and, at best, the journalistic editing market, and arguably that of the semi-professional.

Before getting into the specifics of software and hardware used, it would be best to have an overview of the Islamic State editing process as a whole. Internal documents captured in Afghanistan and published by the CTC refer to the editing process as “processing the media material (montage)”, the third out of five steps of in manufacturing media material. The internal document titled “The Essential Duties of the Media Mujahid” says that once raw materials are captured, or “documented”, the media mujahid can start “processing the materials that were used to record the event.” The document discusses several components of this task; formatting text news, designing and processing images into photo reports, and editing raw video and audio materials to produce final releases. The use of the term “montage”, however, is further complicated in this document, in that it is not only the general editing role, but also “montaging raw video materials to produce video releases”, which the document “Organizational Structure of the Media Office” says is taken care of by the montage team, who “produces filmed projects and turns them into video releases, and delivers them to the Exterior Publishing Team.”

An internal letter released by the dissident Scientific Heritage Foundation dated April/May 2018 included a petition to the Delegated Committee from a group of personnel in the media department, and included their positions in the media department at the end of the document. These positions include editing roles such as “film editing and design” and “Al-Naba’ designer”, but also reveals there is a “joint film editing office for the near and distant wilayas”, which likely serves as a link to the wilayat outside of Iraq and Syria, although the exact purpose is unclear.

Another internal document, “The Table to Evaluate Video Releases” highlights the importance of the editing process, at least for videos, as they are weighed at 40% of the Media Monitoring Committee’s own evaluation table against the 30% for both the narrative development and cinematography elements. A sample of this evaluation from Rajab 1437 (April/May 2016) in practise illustrates the wide variation of final scores, ranging from a weak 25% score on the video “Sinai, the Land of Epic Battles and Sacrifice” from Wilayah Dimashq (albeit being published nonetheless, likely after heavy revision) to an excellent 95% score on the video “Invading Villages to Spread the Guidance” from Wilayah Halab. A report using additional internal documents and interviews conducted by Asaad Almohammad and Charlie Winter note that once the media products are edited, they are then sent to the Media Monitoring Committee and then the Media Council for review, revision (if needed), and finally sent on to be published both internally and externally.

Virtually nothing is known about the editing software that the Islamic State used in its days when it was known as Al-Qaeda in Iraq and the Islamic State of Iraq and Syria. Starting in 2015 however, there have been but a few brief looks into the software that they use to edit videos. The earliest of these previews can be found in the May 2015 video “Media Man, You Are a Mujahid Too” from Wilayah Salahuddin, where a media editor is using Adobe Premiere Pro to edit an earlier segment of the video on a MSI gaming laptop. On the taskbar at the bottom of the laptop, one can faintly see the logos of Adobe After Effects, Adobe Photoshop, TrueCrypt, and HandBrake, the latter two being a disk encryption application and an open-source transcoder for digital video files respectively. The most revealing look into Islamic State’s video editing capabilities is shown in the October 2018 video “Inside the Caliphate #8” from Al-Hayat, where snippets of the editing process is shown in Adobe Premiere Pro. 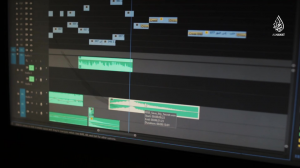 In the editing timeline for the aforementioned video, raw footage and simple effects such as cross dissolve can be seen in a multi-layered fashion. What is interesting to note is the names of some of the video files, taken from the Information Bank discussed throughout the CTC article by Almohammad and Winter, which are arranged in a pattern that shows the name of the wilayah, the title of the video, and a two-to-four digit number sequence. It is unknown exactly how the Information Bank handles file organisation, although it would be assumed that it is organised in a similar fashion to the bins in the Premiere Pro project displayed in “Inside the Caliphate #8” are, with folders sorting anasheed, closed captioning, commentary, footage (further subdivided into “additional 01”, “attacks (isdarat)”, and “bayaah”).

Islamic State utilises two primary audio Digital Audio Workstations (DAW) for their media, the first of which is Adobe Audition. Its earliest appearance is found in the April 2015 video “Bulletin Radio from Wilayah Ninawa” from the aforementioned wilayah, alongside Winamp, a free audio media player. This video serves partly as a behind-the-scenes look at the Al-Bayan Radio station in Mosul, where it broadcasted daily news bulletins in at least six languages, played Qur’an recitations and anashid, and was a source of religious lectures and fatwas. With regards to hardware, Al-Bayan Radio was recorded in a professional studio, using what looks like a Montarbo 783 Mixing Console, along with a studio mic equipped with a pop filter and a shock mount. Other microphones can be seen used throughout the so-called caliphate’s territory to record anashid, sermons, people interviewed for video releases, and broadcast announcements. The most common of these (aside from studio mics) are lavalier microphones (lav mics), and dynamic microphones, both of which are both compact enough to be carried around wherever the IS media team needs them. 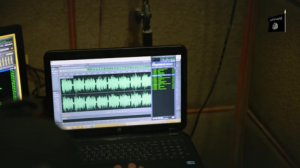 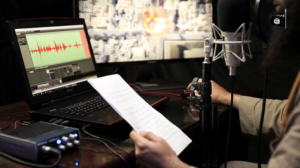 The other DAW that Islamic State frequently uses is MAGIX Samplitude, which was the software of choice used by Mohammed Khalifa, the infamous English narrator of Islamic State to record narration and English daily news bulletins. The first appearance of Samplitude in use is in the January 2016 video “Rather, They Are Alive with Their Lord” from Wilayat Al-Raqqah, which acts as a small documentary about the life of the munshid (anashid singer) Maher Mesha’al, who recorded anashid for the Ajnad Foundation. At the end of the video, Mesha’al is seen recording a nasheed in a small homemade studio with a studio microphone and Samplitude running in the background. Similarly, in the March 2017 video “And You Will Be Superior” from Wilayah Nineveh, a man is seen in front of an MSI laptop and studio microphone recording narration for the aforementioned video, script in hand. Connecting all of this to the left of the laptop is an audio interface that looks similar, if not identical to a PreSonus AudioBox USB 96 2×2 USB Audio Interface.

From Al-Hayat’s various magazines to the weekly Al-Naba newsletter, the Islamic State has been consistent in using PDF files that fit an A4 paper size for standard printing and viewing. A forensic analysis of these files reveal that they are made mostly using Adobe InDesign, varying between being produced on a Windows or Macintosh computer. There are exceptions to this however, namely the pre-Dabiq newsletters Islamic State News and Islamic State Reports, both of which were made in Adobe Illustrator, and the Russian-language magazine Istok, which was created with CorelDRAW X6. Delving further into the metadata of Istok, one would find that three of the documents had the author “MSI”, likely a default placer that means it was created on an MSI gaming laptop, while one of them had the author “adm”, likely short for “admin.” 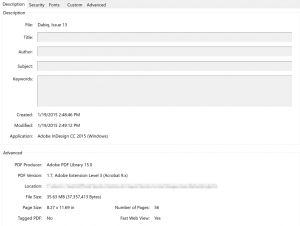 Both Al-Naba and Rumiyah have also been consistently created with Adobe InDesign, the vast majority of them produced on Windows. A forensic analysis conducted by BadTigrou, a self-described ethical hacking enthusiast, reveals that it took the team behind Rumiyah roughly 11 days to write, translate, upload, and publish each issue. The English version of the magazine was the first to be finished, serving as the template for the other translation teams, who then translated and, in some cases, added additional exclusive articles (such as the article “Ubijajte imame kufra na Balkanu” in the Bosnian version of Rumiyah #8).

Currently, there is one piece of evidence that shows photo editing software in use shown at the end of the June 2019 video “Then They Will Be Overcome” from Wilayah Fallujah, where a media operative is seen editing a “breaking news” text statement in Adobe Photoshop using a pre-designed template that has been in use since late 2016, when Islamic State changed the branding style of its media products to its current form. It could be assumed, given the presence of the Adobe Photoshop icon, that Islamic State media editors frequently use Photoshop, and likely Adobe Illustrator to create the infographics seen in Al-Naba and Rumiyah. Additionally, exif data from a variety of posters, pamphlets, and billboards from Islamic State’s publishing house Maktabah al-Himmah show that Photoshop, InDesign, and Illustrator are consistently in use.

Surprisingly, despite the decline of both the physical territory and media output of the so-called caliphate over the past several years, with the latest wilayah video release being earlier this week as of this writing, video quality and production/editing efforts seem to remain largely unfazed, and will likely continue this trend for the near future.