In the past, particularly between 2014 and 2017, Islamic State’s (IS) video propaganda has been noted, among other things, for its high quality imagery, impressive visual effects and animations, booming sound effects, and the editing prowess of its media workers. Some news outlets and journalists have even made comparisons to the “Hollywood style” of filmmaking. Looking at the thundering intro sequence of, for example, Flames of War II, it seems quite obvious where comparisons such as these stem from: 1080p Full HD footage of fighting on the battle field and close ups of brutal killings are intercut with an imposing animation of letters that is enriched with particle flight, flame, and colour temperature effects. Visuals such as these were – seemingly – reserved for the most high-end pictures from Tinseltown.

However, while Islamic State’s media offices were able to significantly enhance the footage their media mujahideen recorded, the fact that they are not Hollywood-class media producers begins with their cameras. In fact, videos like Flames of War II were made possible with the ongoing developments on the home consumer market (which conflates with the liberation of semiotic capabilities through developments in editing software).

This blog contribution analyses the technology Islamic State has used since the inception of the al-Furqan Media Foundation in 2007. This study, brief though it is, is made possible by a years-long scientific viewing practice of Islamic State videos that goes hand in hand with building an extensive jihadist propaganda video library dating back to 1986. Most of the videos mentioned below can (still) be found in the Zelin-corpus, on archive.org, and throughout rather obscure websites.

As can be seen below, Islamic State media producers have not developed with Hollywood technology but with the home consumer and, at best, the journalistic camera market.

During the infancy of Islamic State’s video production, beginning with the inception of al-Furqan Media Foundation in early 2007, the media workers’ equipment is never shown, at least not in any of the preserved and currently known media. Looking at the videos, though, reveals that Islamic State’s media workers relied exclusively on camcorders which at this time may be digital systems (or possibly still VHS systems, but this seems unlikely).

This is probably best demonstrated by screenshots from videos like An American Truck Supply Destroyed by IED (al-Furqan Media Foundation, 1 June 2007) which was filmed in 720 x 576. This corresponds to the 4:3 PAL ratio which is the TV norm Europe shares with Syria and Iraq. Most video productions still preserved from this period maintain the image norms of PAL camcorders and video recorders. 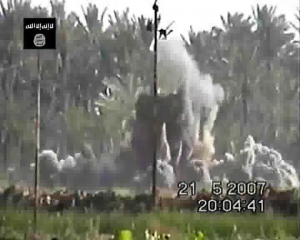 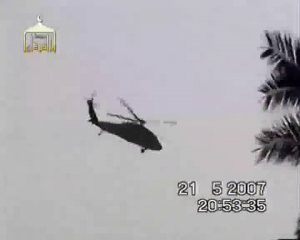 Screenshots from An American Truck Supply Destroyed by IED

With Islamic State developing from ISI to ISIL, there a discernible efforts to produce more appealing images on a regular basis. While there is an investment into camcorders, the Islamic State uses the video series Salil as-Sawarim (“The Clanging of the Swords”, al-Furqan Media Foundation, June 2012 – May 2014) not only as its new record-setter in terms of runtime (each episode is around 60 minutes) but also a beacon in terms of quality. For the first time Islamic State produced media items in 1080p Full HD, making Salil as-Sawarim the video epic of the transitional phase between ISI and the Caliphate.

This becomes evident, at the latest, with Salil as-Sawarim 2 (16 August 2012). While the video itself is currently not preserved in 1080p, some of its footage has been recirculated in 1080p HD through German language IS-supporter al-Mourabitoun. Their video, titled Der Krieg ist Täuschung (“War is Deception”, 2018), is preserved in 1920 x 1080 Full HD, meaning that al-Furqan had the ability to record in Full HD in 2012.

Still, during this period, Islamic State’s cameras are practically invisible with only a few exceptions. Two notable instances can be seen in Pictures from the Land of Epic Battles 1 (al-I’tisam Foundation, 21 October 2013). One shot shows a difficult to identify DV camera of the time. A second shot shows a journalism quality Canon model, assumed to be a Canon XF 100. 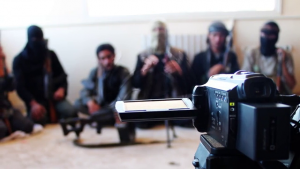 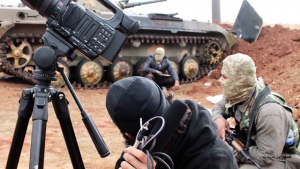 Screenshots from Pictures from the Land of Epic Battles 1

The period between 2014 and 2018 is particularly fruitful with respect to the developments in camera systems. Not only does Islamic State, at least occasionally, produce self-representations of its media workers, it even discovers the documentary aesthetic of briefly showing its media equipment in selected shots.

Islamic State media workers were, however, being protective of their equipment. They seemed to specifically choose shot types, camera angles, camera movements, and editing speeds in order to protect their equipment from being the centre of attention and being clearly identified. While GoPro and drone footage is easily identified in comparison, a vigilant study of IS videos combined with frame by frame analyses of videos from this period will uncover at least two handheld camera models that were in use in the Caliphate.

First, there exist several shots of media workers using Canon EOS systems using EF and EF/S bayonet connectors. These shots seem to indicate a preference for fully compatible camera systems of journalistic (i.e.: not Hollywood) quality. Second, there is one model that is clearly identifiable, namely the Nikon P900, visible for example in Inside the Khilafah 8. The P900 is a bridge camera and as such comes with firmly installed lenses. This seems like a disadvantage when compared to the more adaptable Canon cameras. But the P900 features an 83x optical zoom which allows for reconnaissance on the battlefield and, like drones, for safe distance to martyr attacks. Shots produced with a P900 can be identified by a swirling image at high zoom rates.

Cameras like these are available to home users through any electronics department store. Nikon P900 are currently available for several hundred pounds while the presumed Canon EOS systems generally range in the low four digits. 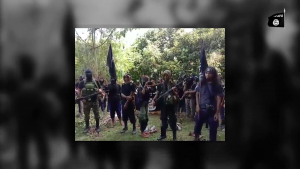 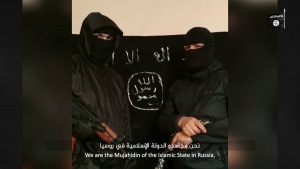 A marked setback can be noticed in the 2019 releases which were all titled The Best Outcome is for the Pious. While most Wilayat released 1080p videos in this series without technological restrictions, the Wilayat East Asia version (22 June 2019) frames video filmed in 4:3 ratio with a blurred version of itself in order to reach 1080p. Apparently, this Wilayat has not been provided with new cameras. Also, the Qawqaz Wilayah seems to have filmed its message (26 June 2019) on a smartphone as indicated by an incomplete pillar boxing effect. Not even the background footage in the latter video is fittingly scaled to the 1080p format which indicates a lack in basic editing skills.

Current developments in camera systems seem to fall in line with the downfall of the Caliphate and the decline in its media output. This situation, in turn, allows for groups like Hayat Tahrir al-Sham to fill the media vacuum left behind by Islamic State with increasingly professional productions.