On 10 October 2019, Safiyya Amira Shaikh was arrested in London for planning a terrorist attack on St. Paul’s Cathedral. Shaikh had conducted surveillance on the cathedral, prepared a pledge of allegiance to the caliph of the self-styled Islamic State, and had unwittingly asked two undercover police officers to supply her with explosives for the attack. Messaging one of the undercover officers, she wrote: “I would like to bomb and shoot ’til death … I really would love to destroy that place and the kaffir [infidels] there.”

Shaikh had a substantial digital footprint. She was the administrator of a Facebook page for Muslim converts, created in 2012, which featured stories of how people – especially women – came to Islam, and was active on Telegram. She also had several YouTube profiles, including one that featured 89 playlists between 2017 and 2018. This material gives a rich insight into her background, circumstances, and radicalisation. 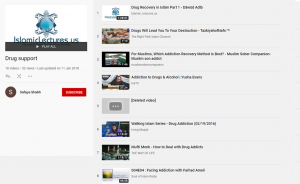 First, it shows that Shaikh was struggling with drug addiction. In the autumn of 2017, she created several playlists on YouTube – titled ‘drug support’, ‘overcoming haram [forbidden] situations’ and ‘dua [prayer] for addict’ – which featured videos on how to overcome drug addiction, all through the framing of her Islamic faith. It is unspecified exactly what she was addicted to, although given the frequency of such videos it is likely she had issues with hard drugs. Many videos covered the concept of exorcism in Islam (ruqya), which is an apparent attempt to find a cure for her maladies.

Second, she appeared isolated from her family and social relationships. Her uploads on her ‘Muslim Reverts’ Facebook page and YouTube channel not only celebrated the empowerment and positive transformation that religious conversion can bring but also spoke to the difficulty and isolation that newfound adherents often experience. Shaikh is herself a convert (she was previously called Michelle Ramsden), and in creating this online community there is a clear desire to find and foster community support and social belonging. That desire was also behind her attempts to organise offline meetups for female converts, held at Al Furqan Education Centre in Hounslow in 2016. Yet by the end of the year, it appears she stopped attending events, due to fears of being reported for her views. She also warned female converts to avoid abusive relationships by ‘knowing your rights before you get married’, though it is unknown if this reflects her personal experience; Shaikh had separated from the father of her child, but the reasons for this are unclear.

Third, she appears to be naïve and lacking in critical thinking skills. Shaikh had watched videos on how to change the colour of your eyes to purple by listening to specific sound frequencies, saving them in a playlist titled ‘Magic’. That she not only believed this was possible but also appears to have attempted to do so is testament to her general gullibility. She also seems to be a believer in conspiracy theories, posting in 2015 on Facebook a conspiracy theory that Jews were responsible for 9/11. Taken together, her drug abuse, family difficulty, and general naivety all point to her having several underlying vulnerabilities, which extremist narratives could exploit.

She regularly spent hours on YouTube, consuming extremist material from some of those most prominent jihadists in the world. There were playlists dedicated to jihadist veterans such as Abdullah Azzam, the Palestinian co-founder of al-Qaeda who fought in the Afghanistan jihad in the 1980s, and Abu Muhammad al-Maqdisi, the Jordanian writer who has popularised many concepts of jihadist thought. She also watched many talks produced by the British jihadist network al-Muhajiroun – including lectures by Abu Waleed, Abu Izzadeen (also known as Trevor Brooks), Anjem Choudary, Omar Bakri Muhammed, and Abu Hamza al-Masri – and the American activist Ali al-Tamimi. Curiously, one playlist contained ‘counter-narrative’ videos produced by ICSVE, though it is unclear whether that content stalled her radicalisation. 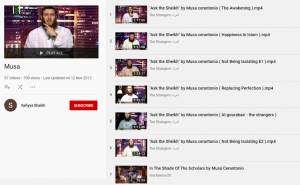 Her most prominent influences were Ahmad Musa Jibril and Musa Cerantonio, two ideologues who amassed a substantial following among the recent wave of jihadists, especially foreign fighters who travelled to fight in the Syrian civil war. Her YouTube profile linked to hours of material from Jibril and Cerantonio. Labelled ‘new clerical authorities’, this pair primarily functioned as ‘cheerleaders’ for Islamic State, helping to radicalise individuals by providing an apparent religious legitimacy of fighting jihad. They are prolific, engaging, and persuasive, and – perhaps most importantly – produce content in English that can resonate with Western audiences. 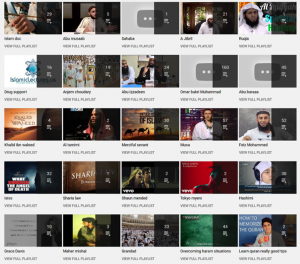 If all this extremist content was – and largely remains – easily accessible on YouTube, why has it not been taken down? While the platform deleted many of the videos she watched, including those directly produced by Islamic State, much of the content does not explicitly encourage acts of terrorism. Instead, it is generally fronted as, and mixed among, general Islamic teachings, and often presented in a deliberately careful way to avoid outright incitement for jihad. As such, YouTube’s systems, moderators, and flaggers may not automatically detect this material. And there are, of course, limits to what her digital footprint shows. Most significantly, it is unclear why she made the ‘jump’ from being a supporter of Islamic State who consumed their material online, to actively wanting to participate in violence. It is also unclear whether her radicalisation was entirely online – and, indeed, what other platforms or websites she was visiting – or if individuals offline also encouraged her extremism. Finally, as her profile created no YouTube playlists after February 2018, it remains to be seen whether her influences changed or narrowed as she began planning her attack.

That notwithstanding, the absence of particular videos is also revealing. There are no videos or playlists of Anwar al-Awlaki, the famous Yemeni-American ideologue who was highly influential among jihadists. While he was responsible for organising numerous terrorist attacks, much of his content was not actually extremist; he was most famous for a lecture series on the life of the Prophet Mohammed. Yet in November 2017 YouTube decided to delete all of his videos from the website, regardless of their content. It remains to be seen whether YouTube will extend that policy to other less famous, but perhaps no less influential, extremist ideologues.