Fanning the Flames of Hate: The Transnational Diffusion of Online Anti-LGBT+ Rhetoric and Offline Mobilisation

This Insight is part of GNET’s Gender and Online Violent Extremism series in partnership with Monash Gender, Peace and Security Centre. This series aligns with the UN’s 16 Days of Activism Against Gendered Violence (25 November-10 December).

On 19 November 2022, a lone gunman entered an LGBT+ nightclub in Colorado Springs, US, killing five people. The massacre was perpetrated during a drag show partly organised to commemorate Transgender Day of Remembrance, a day used to honour the lives of transgender people killed in acts of anti-transgender violence.

The actions of the local gunman come at a time of growing hate and violence towards LGBT+ populations in the United States. The targeting of drag performers has particularly increased as a result of focused right-wing media attention and criticism this year. There are relevant concerns about the relationship between anti-LGBT+ violence and hateful online rhetoric against this community.

This shooting also comes after a tense election cycle in the United States that saw many right-wing politicians target LGBT+ people as a campaign tactic. In a district neighbouring Colorado Springs, congresswoman Lauren Boebert has been particularly active in spreading anti-LGBT+ rhetoric, especially against drag queens—often accusing LGBT+-inclusive events as ‘grooming’ children and warning drag queens to stay away from young people. When Congresswoman Boebert tweeted her condolences after the shooting, Democratic Congresswoman Alexandria Ocasio-Cortez responded (Fig. 1): 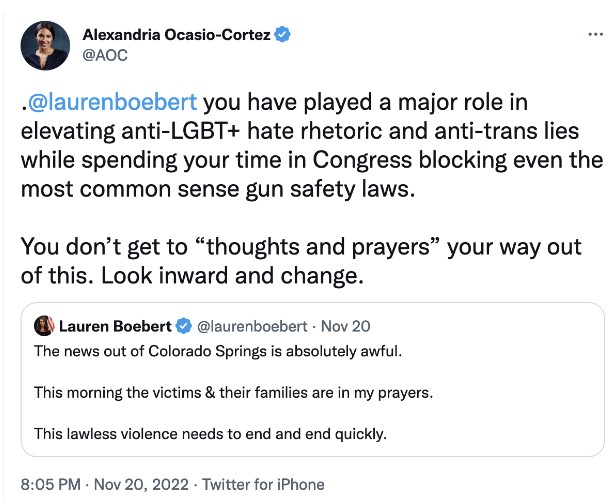 Ms. Ocasio-Cortez is right to make the connection between hateful online rhetoric and a rise in anti-LGBT+ mobilisation. A report by the Center for Countering Digital Hate and the Human Rights Campaign found that Boebert’s Twitter account was the third most influential social media account in spreading the ‘groomer narrative,’ with her top 50 most hateful tweets reaching an audience of 7 million. Researchers at ACLED, a conflict database, have found that since the rise in anti-LGBT+ rhetoric from right-wing politics and media this election cycle, there has been a fourfold increase in anti-LGBT+ mobilisations and documented violence between 2020 and 2021, with 2022 being on track to outpace this.

While political violence often increases during election years, these rising rates of anti-LGBT+ violence appear to be matched by patterns of online extremism against LGBT+ groups. We identify three ways in which mobilisation against the LGBT+ community has the potential to accelerate through online tools. We suggest that technology can speed up the transnational diffusion of anti-LGBT+ rhetoric, strengthen cross-sectoral coalition building, and intensify the coordination of online attacks against visible LGBT+ claim-making in online spaces.

Widespread social media use has led to the internationalisation of what Wijaya (2022) calls digital homophobia, or technologically-enabled hate against queer and transgender people. Online tools—such as mainstream and niche social media platforms—can facilitate the sharing of these anti-LGBT+ frames across borders. In the offline realm, we have observed a push from US-based right-wing groups lobbying against LGBT+ rights overseas and other cross-border alliances that attack LGBT+ rights from multiple angles. While existing evidence suggests that digital platforms stimulate bottom-up sourcing of campaigns, we contend that online spaces can also accelerate the centralised and cross-border diffusion of anti-LGBT+ rhetoric that has been observed offline.

In the offline realm, right-wing fundamentalist groups around the world have formed cross-border alliances in the global fight against LGBT+ rights. In 2018, the European Parliamentary Forum on Population and Development uncovered that multiple anti-LGBT+ groups based in the United States were involved in Agenda Europe, a comprehensive strategy aimed at eroding LGBT+ and reproductive rights in European societies. Groups based in Europe, such as the French organisation La Manif pour Tous, have also been in the business of exporting strategies for anti-LGBT+ organising in Latin American countries. Locally, themes that are referenced in this context include LGBT+ rights as foreign and incompatible with nationalist identities, as a threat to traditional family structures, and as antithetical to prevailing religious beliefs. Russian President Putin has also framed trans rights as a moral issue when painting a picture of a dystopian future in liberal Europe by arguing that “they claim now that children can play five or six gender roles”.  While rhetoric at the national level varies across these themes, campaigns are generally centralised around the idea that ‘gender ideology’—or the cooperation of reforms that uphold LGBT+ rights— is to blame.

The transnational coordination and distribution of anti-LGBT+ rhetoric observed in the offline realm can easily be replicated, if not accelerated, in online spaces. In Indonesia, social media has amplified the reach of homophobic calls for policies that weaponise gender and sexuality. Beyond the domestic context, anti-LGBT+ groups from the US and Europe also occupied the online space when Altermedia—a consortium of media platforms tied to American, German, and Romanian white supremacists—produced anti-LGBT+ content across newsletters, websites, and radio stations. Wallaschek et al. find that sexist and homophobic rhetoric in German, Italian, and Polish tweets around #InternationalWomensDay focus on the ‘gender ideology’ narrative. Bradshaw and Henle point out that gendered narratives are weaponised in Russian foreign influence operations targeting the United States. Their strategies include targeting women in public life and using more ‘covert’ gendered stereotypes to manipulate domestic politics. We expect to observe similar patterns with anti-LGBT+ content sourced from a variety of coercive actors in online spaces.

Online spaces have also provided semi-anonymous spaces for coalition-building among groups that would not traditionally want to be seen collaborating or coordinating campaigns publicly. The online development of anti-LGBT+ frames, particularly those specifically aimed at stoking fear and hate against the rights of trans people, has occurred between traditionally right-wing groups and newer coalitions of self-described ‘gender critical feminists’, such as in the United Kingdom and beyond. The relative anonymity and asynchronous nature of online organising has thereby provided disparate groups with the technology to build coalitions with the option of plausibly denying public coordination.

These shared rhetorical frames are remarkably effective in uniting disparate groups. In Latin America, as anti-LGBT+ mobilisation reached a fever pitch in the media and online, once-oppositional religious groups began to unite in coordination against LGBT+ rights, most notably with the major social mobilisation to reject the 2016 Peace Deal in Colombia because of its LGBT+-inclusive efforts. Javier Corrales has noted how the alliance between Catholic and Evangelical groups throughout Latin America to advance anti-LGBT+ claims is notable, given these groups’ historical clashes over social issues. In Latin America, much of this effective framing against ‘gender ideology’ or LGBT+ inclusion happened as a result of disinformation in the online space. Online disinformation which frames LGBT+ inclusion as a threat to a broader population (or more specifically children) therefore becomes a mobilising frame through which these disparate groups come together.

The internet has provided LGBT+ people with opportunities to build networks both anonymously and publicly, and access resources. Beyond in-group networking, social media has become a space for visibility and claim-making. Being able to share aspects of queer identity online has boosted the visibility of queer people and elevated the work and celebrity of queer activists, such as when actress Laverne Cox was featured on Time Magazine’s cover in 2014. At the same time, LGBT+ activists routinely face swarms of online hate, abuse, and extreme threats to their personal safety. Periodic exponential increases in online hate are frequently tied to visible claim-making by individuals or groups shining light on LGBT+ rights. Such heightened online abuse tends to follow specific narratives and unified rhetoric, which points towards the diffusion of narratives and cross-sectoral coalition building mentioned above.

Overall, anti-LGBT+ violence occurring in the world today can be linked to online anti-LGBT+ extremism.  While research on other forms of online radicalisation suggests that the link between online radicalisation and offline violence is not a deterministic one, the simultaneous rise in online anti-LGBT+ rhetoric and offline mobilisation is extremely concerning. The three mechanisms we discuss here suggest that online tools can amplify and accelerate connections between anti-LGBT+ campaigners globally, and spread harmful and inflammatory rhetoric to broader audiences. When high-profile politicians reproduce the arguments of radical anti-LGBT+ groups, it legitimises their claims and contributes to the mainstreaming of their ideas. Online extremism diffuses prejudicial misinformation transnationally and introduces mobilising frames through which broad coalitions can unite in support of anti-LGBT+ causes. More research and attention must be focused on understanding these mechanisms and tracing their dynamics cross-nationally.

In areas of heightened political and prejudicial violence, such as the United States (particularly in an election year), there is a much more significant risk of this online hate transitioning into physical violence. As such, any efforts to redress this violence must also reckon with the growing extremism of online communities.

Samuel Ritholtz is a Max Weber Fellow at the European University Institute in Fiesole. Their research explores the politics of identity, stigma, and cruelty during war, with a particular focus on the experiences of LGBTIQ+ populations.

Allison Koh is a PhD researcher at the Hertie School in Berlin. Her research investigates coercive power dynamics on social media, with a focus on authoritarian politics and digital transnational repression.

Anita Gohdes is Professor of International and Cyber Security at the Hertie School in Berlin. Her research focuses on the intersection of technology and security, with an emphasis on digital state repression.