The recent killings of African Americans in Buffalo, New York, have once again renewed discussions of the ‘Great Replacement’ conspiracy which the 18-year-old gunman cited as his inspiration behind the attack. The hateful and racist theory that falsely propagates that White people are being actively replaced by non-White immigrants has been embraced by extremists and white supremacist groups in recent years and used as a justification for unleashing terror against Muslims, Black people, Jews, and immigrants.

But, the influence of the demography-based theory, coined by French author Renaud Camus in his 2011 book La Grand Replacement, goes beyond white extremists. In India, where the world’s third-largest Muslim population resides, a version of this theory has been in practice by the right-wing Hindutva forces for more than a century, whipping up a communal frenzy in order to maintain the dominance of the Hindu majority.

The Great Replacement in India

The discourse surrounding demographic invasion and the displacement of the ‘indigenous’ Hindu population by the ‘foreign’ Muslim minority in India is foundational to the rhetoric of the right-wing Rashtriya Swayamsevak Sangh (RSS) and its affiliated parties who seek to establish a Hindu Rashtra (Hindu nation). A Hindu Rashtra refers to a nation-state based on the dominant Hindu social, cultural and religious identity, under which all other minorities must assimilate. The early writings of the founding leaders of the RSS like M S Golwalkar presented Hindus as the original native inhabitants of India, and portrayed Muslims as tyrannical foreign conquerors and therefore outsiders. The Bharatiya Janata Party (BJP), the political arm of the RSS, in power since 2014, has consistently used these threads to project Islam and Muslims as an internal enemy of the Hindus while pursuing a nationalist ideology and majoritarian politics.

As the largest minority community, Muslims constitute just over 17% of the total population with 204 million people. Statistically, the assumption that Muslims can outbreed 966 million Hindus and cause the death of the citadel of Hinduism holds no water. The latest data from the National Family Health Surveys (NFHS) shows that fertility rates have decreased across all communities including Muslims; and have dipped below the replacement level leading to zero population growth. Additionally, the study dispelled the popular myth that literacy influences decisions to have children rather than religion.

The data has not prevented the Sangh parties from propagating a myth that Muslims are on a quest to turn India into an Islamic nation. The goal, according to the right-wing conspiracy, is being achieved by Muslims waging various kinds of jihad: a ‘population jihad’ primarily through the mode of reproduction, and ‘love jihad’ by seducing vulnerable Hindu women into marriage and forcing them to accept Islam, are purportedly employed to turn Hindus into a minority. This rhetoric is supported by widespread harmful stereotypes and conspiracies that Muslim men are lustful and dangerous; Muslim women have higher fertility; they lack the capacity to plan families; they engage in polygamous relations and are fundamentally inclined toward violence.

One reason the RSS came into existence was due to a section of Hindu leaders being convinced of the ‘common sense’ that Muslims would eventually outrace them. Coincidentally, the notion of ‘demographic decline’ took roots among Hindu nationalists around the same time as narratives of ‘white extinction’ were beginning to develop among white colonial rulers. In his 1892 book National Life and Character: a forecast, British-Australian historian Charles Pearson predicted that Chinese, Hindus, and Black people would overtake the white race.

Heeding such warnings, Bengali intellectual Lt Col U N Mukerji published ‘Hindus – A Dying Race’ in 1909. “We are also a decaying race. Every census reveals the same fact. We are getting proportionately fewer and fewer. There is no actual decrease; but the rate of increase compared with that of the Mahomedans is extremely small,” he wrote, comparing the imminent disappearance of Bengali Hindus to the native populations of Maoris in New Zealand, Aborigines in America, and Indians in Haiti. Although Mukerji used simple observations as scientific claims to feed into exaggerated fear of extinction, the book struck a chord with the Hindu nationalist leaders who reproduced its extracts in public speeches and pamphlets.

The ideas propagated in ‘A Dying Race’ became a driving force for the political mobilisation of Hindus and set the course for future Hindu identarian politics. Mukerji took a step further and along with R B Lal Chand set the foundation of the Punjab Hindu Sabha, to defend the interests of Hindus. The Punjab Hindu Sabha eventually gave birth to the Hindu Mahasabha in 1915 whose core ideology was based on the principles of Hindutva and identified India as a Hindu Rashtra. The RSS, the spiritual heart of the nationalist ruling right-wing BJP, emerged from the shadows of the Mahasabha.

Presently, the right-wing Hindutva forces are repurposing the century-old demography-based rhetoric to churn out hateful content in the form of memes, misinformation and propaganda to target the Muslim population both online and offline. They have effectively meshed various facets of the replacement conspiracy with the Hindutva ideology to create sectarian politics, fan communal tensions, foster Islamophobia and generate an atmosphere of fearmongering among Hindus, with the intention of maintaining Hindu supremacy.

With World Population Day being commemorated on July 11, right-wing accounts took to social media to post content related to Muslim overpopulation. One viral misinformation video posted by multiple Twitter accounts was of school children reciting Islamic prayer – “In a Jharkhand village where 75% population is of Muslims, Hindu kids are forcefully made to recite a prayer of Allah. Islamic State is arriving??!!!,” one user posted. The original video of students reciting the prayers during an evaluation drive in a school in Assam was falsely located as taking place in Jharkhand (a non-BJP governed state). Another viral video shared by several Twitter accounts in Pakistan of a massive crowd gathered under the Metro rail bridge, was passed off as the non-BJP state of West Bengal. “Kolkata today.. looking like ants from far… What Mamta (Banerjee chief minister) will gain? …we will be SOON an ISLAMIC REPUBLIC FOR SURE if she leads the country !!!” one user commented. These videos act as disinformation campaigns by insinuating that if Hindus do not vote for the BJP, parts of the country will be overrun by Muslims and turn into an Islamic nation. 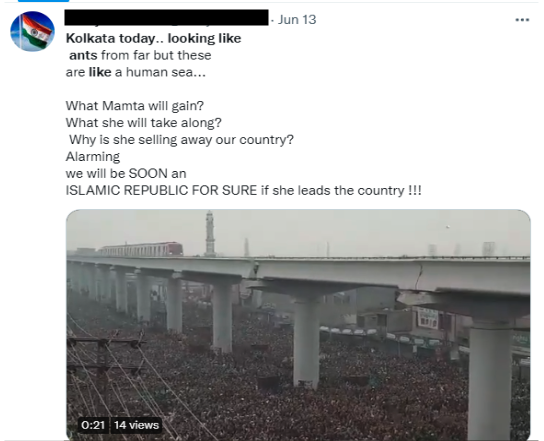 Between 1 and 30 July, Facebook pages, public groups and verified profiles alone had 6,794,303 impressions on the keyword जनसंख्या (population in Hindi). The phrase जनसंख्या विस्फोट (population explosion) garnered 187,924 interactions, जनसंख्या जिहाद (population jihad) had 104,691 likes, shares; जनसंख्या नियंत्रण कानून (population control bill) was mentioned 1,166,596 times and population bomb had 135,454 interactions. These keywords and hashtags trended after a speech by Yogi Adityanath, the chief minister of India’s largest state of Uttar Pradesh, using the overpopulation bogey, to warn against “population imbalance.” The rabid rousing BJP leader singled out the community’s higher growth rate and said population control measures must ensure that the native Hindu population is not outraced. His statement on World Population Day, and a United Nations report which projected India overtaking China as the most populated country of the world in 2023, flooded Facebook and Twitter with insidious posts attacking Muslims. 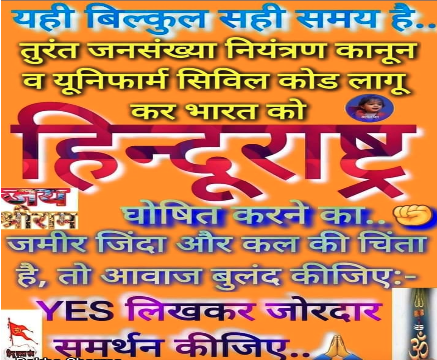 Fig 2: A meme calling for the establishment of ‘Hindu Rashtra’ and the implementation of a population control bill and uniform civil code

Right-wing accounts disseminated the BJP-backed misinformation that Muslims were solely responsible for population growth, and should hence have their civic rights restricted as punishment. These included videos of clerics and ordinary men and women claiming that children are an offering from Allah and that they would reject measures to control the population, and a photograph of a Muslim man riding a motorcycle with a burka-clad woman and five children. These prompted demands to introduce a population control bill which would disenfranchise Muslims, jeapordise their minority status, and limit their social welfare measures and employment opportunities. 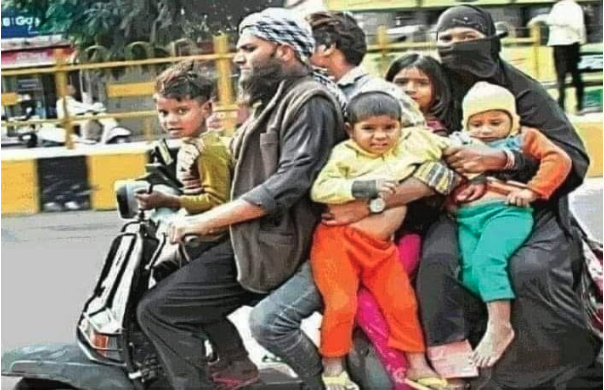 Major electronic news channels used the topic as a xenophobic dog whistle. Primetime debates and discussions focused on high Muslim fertility, polygamy and lack of family planning. On the same day as Adityanath’s speech, ABP news ran an hour-long show in Hindi which was viewed 52,000 times entitled, “Is religion responsible for ‘population explosion’…from population imbalance to anarchy”. On July 13, News India ran a 38-minute showcase with 270,000 views headlined “If children are a gift of Allah, then who will provide them with bread and lentils?”. Aaj Tak news later carried a report titled “Population in turmoil, Muslims on target” with 48,000 views. All three news shows framed overpopulation fuelled by Muslims as the biggest stumbling block in India’s success story.

These narratives by pro-government supporters and media channels implied that urgent action was needed against the Muslim minority through policies and legislations, to control the country’s population. To some extent they have created a favourable public opinion towards the BJP government’s initiative to introduce a population control bill and enact a two-child policy. Previous attempts to restrict population with a two-child norm, were dismissed by the parliament and the Supreme Court as unconstitutional.

The demographic invasion conspiracy is one among the many baseless and racist anti-Muslim claims to have flooded social media in India. It has entrenched a toxic culture both online and offline wherein the Hindu majority find it acceptable to call for punitive measures against Muslims. Like in the case of the 2019 Christchurch or El Paso shootings, where white supremacist extremists directly cited the ‘Great Replacement’ theory as the reasoning behind their attacks, it remains a possibility that the conspiracy could motivate radicalised minds to carry out attacks against Indian Muslims. Meanwhile, instances of targeted violence and hate speech against Muslims continue to grow across the country.

Shweta Desai is an independent journalist and researcher based between India and France.