This Insight provides a quick overview of al-Qa’ida supporter reactions to Zawahiri’s death followed by a closer focus on pro-IS responses across a variety of platforms and the more prominent narratives being promoted by these individuals.

Prior to President Biden’s August 1, 2022 announcement that the United States killed Ayman al-Zawahiri in a drone strike, speculation began to circulate after a leak indicated that an al-Qa’ida leader had been targeted. As reported by Extract, pro-AQ accounts in various online spaces refuted the claim and insisted the target was an individual from Islamic State Khorasan Provence (ISKP). However, following President Biden’s announcement, pro-AQ supporters generally accepted the news expressing a mix of sorrow and celebration of his ‘martyrdom’ with a reminder to their enemies that “it is not a loss for a man to become a shaheed, as he [Zawahiri] had been wishing for this on the battlefield.” Others encouraged media activism alongside incitements to violence: “We must spread the Justice of the Sheikh’s case and his methodology on the hashtag #[word redacted]_zawahiri. Everywhere we explain to the people the message of the Sheikh.”

Reflecting the continuing deep mutual animosity between al-Qa’ida and the Islamic State, AQ supporters also took the opportunity to admonish Islamic State supporters with claims that a real mujahid would never celebrate the death of another Muslim. One pro-AQ account posted a Telegram screenshot of an IS supporter rejoicing at the news of Zawahiri’s death by declaring him an “enemy of God” and stating that “his demise equals to me the joy of the death of Bashar al-Assad and the joy of the demise of the heads of the cross…” In response, pro-IS accounts commented how they had seen “AQ fans” cheering Abu Muhammad al-Adnani’s and Abu Bakr al-Baghdadi’s deaths thereby accusing AQ supporters of hypocrisy.

As of August 3, AQ has yet to officially address the news.

The following broader categories include some of the more prominent narratives circulated in pro-IS spaces across social media platforms [Telegram, Twitter, Facebook, Hoop, and RocketChat].

Pro-IS users expectantly disparaged Zawahiri citing his 2014 official disavowal of Baghdadi’s Islamic State in Iraq and Syria, his acceptance of Muhammad al-Julani’s reaffirmed bay’ah to AQ instead of to Baghdadi, and finally, his relationship with the Taliban. Although some pro-IS supporters expressed hesitancy to outright takfir (excommunicate) Zawahiri, others justified their decision to declare him an unbeliever by stating that he killed IS members, actively worked to prevent the establishment of the so-called Caliphate, and made a 2016 allegiance to Taliban emir, Mullah Haibatullah Akhundzada.

In chats containing IS and AQ supporters, individuals continuously debated (within the context of Zawahiri) the appropriate grounds for making takfir on an individual, what constitutes major sins vs nullifiers, and the types of actions that turn someone into an apostate. Some accounts shared dua asking for God to punish Zawahiri for his treachery and send him to Hell. 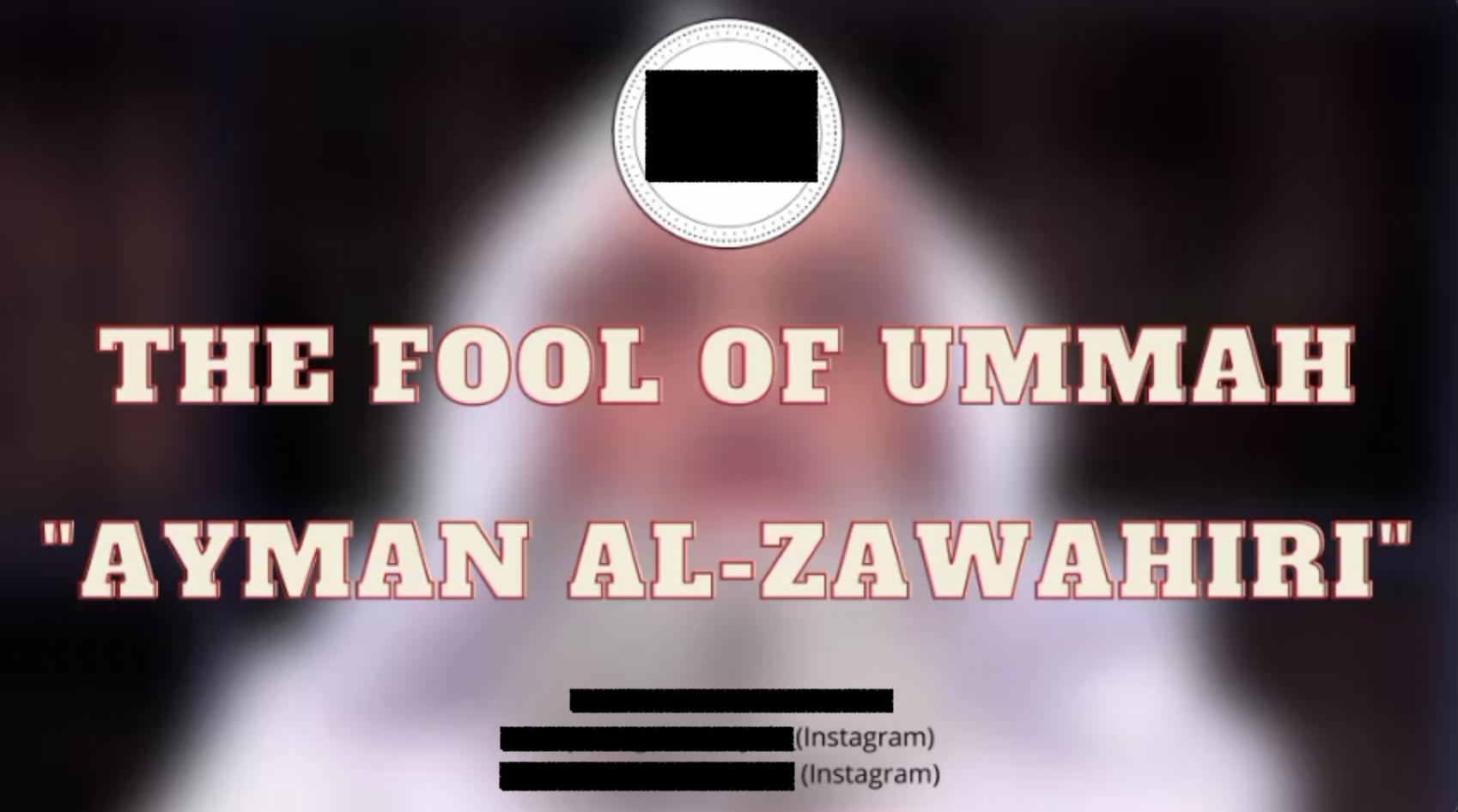 Other narratives centred on highlighting how Zawahiri’s mistakes led to his own death with the most prominent error being his decision to trust the Taliban and seek refuge in Kabul. A post widely shared throughout pro-IS online communities displayed images comparing the flattened site where Baghdadi was killed to the building Zawahiri was in at the time of the drone strike. It featured their belief that the Taliban sold Zawahiri out to such a degree that there was no need to bomb the building given that the information provided to the US was extremely precise. Factually speaking, the US bombed Baghdadi’s compound after the raid to prevent the site from becoming a shrine. 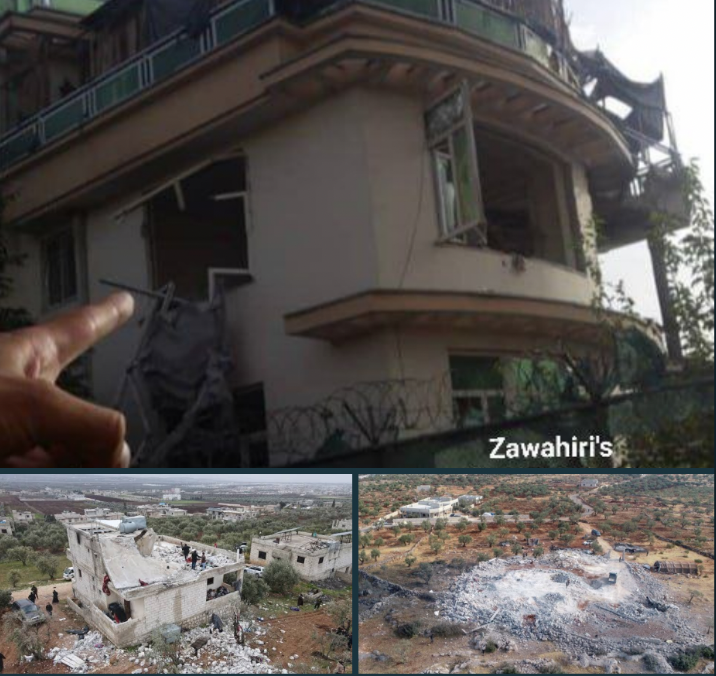 Another prominent messaging theme accused Zawahiri of “destroying al-Qa’ida” and soiling Osama bin Laden’s legacy through a series of unforgivable mistakes and hypocritical stances such as rejecting the “Wahhabism” of the Saudis but embracing the Taliban. An example includes an admin of an unofficial IS translation collective announcing an upcoming translated release of a document entitled “Charisma-free al Zawahiri was running al-Qaeda into the ground” in a swift mockery of Zawahiri’s propagandising lengthy lecture style, personality, and leadership capabilities. 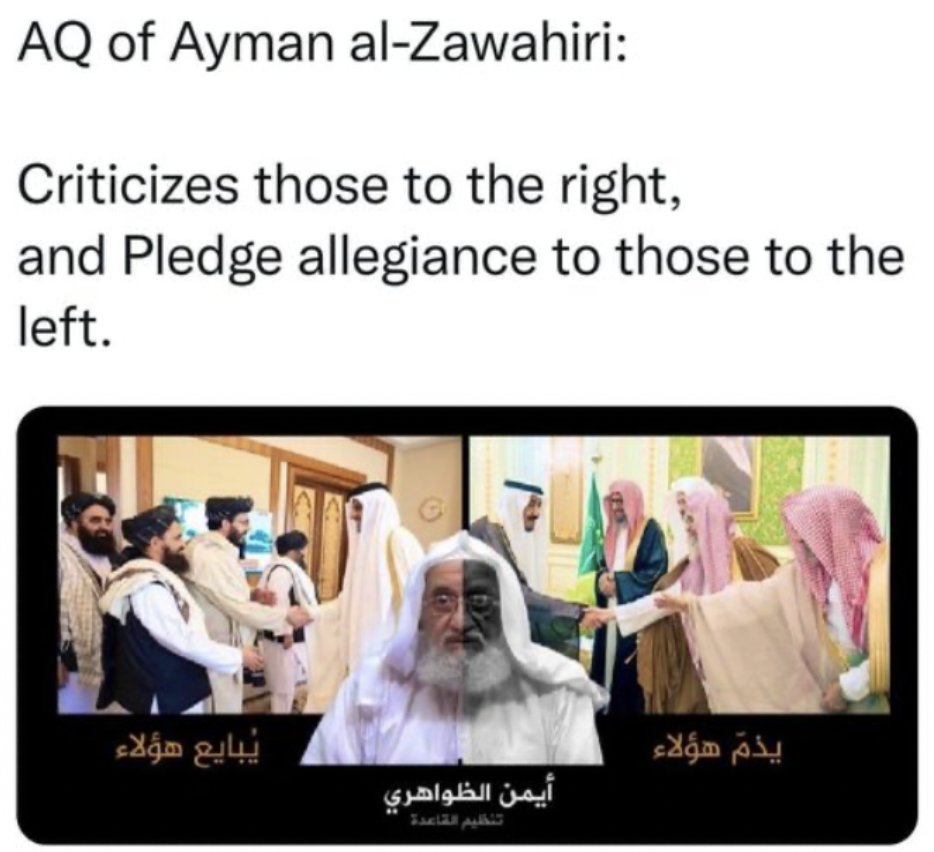 Two Sides of the Same Coin: AQ and the Taliban

The Islamic State’s disdain for the Taliban is well-known and amongst pro-IS online supporters, they framed Zawahiri (as well as the larger post-bin Laden AQ organisation) and the Taliban as being “two sides of the same coin.” They paired anti-Taliban criticisms with news of Zawahiri’s death and shared a variety of media featuring accusations against Zawahiri that he plotted to have Taliban-allied al-Qa’ida members infiltrate the Islamic State from within and subversively insert their “corrupt” ideology.

Although not every post mentioned both Zawahiri/al-Qa’ida and the Taliban, IS accounts across platforms sent a deluge of anti-Taliban messages clearly implying that al-Qa’ida must be held accountable and criticised for allying itself with such an organisation. A number of PDFs included older IS anti-Taliban propaganda but given the news, IS supporters capitalised on the moment to re-feature previous official and unofficial Islamic State content surrounding this subject matter.

As reported by Mina Al-Lami, speculations and conspiracies about collusion between the Taliban and the United States circulated widely. Some proposed Zawahiri himself wilfully acted as a puppet of “the West” and the Taliban government while others mostly cast blame on the Taliban; proposing that American money was the root motive for the Taliban’s betrayal.

A Fourth Category: Benefits of Zawahiri’s Death and Future Alliances

Although not as common as the other narratives previously discussed, some chatter interestingly put forth the idea that Zawahiri’s death opened a pathway for an alliance between al-Qa’ida and the Islamic State despite previous deadly rivalries: “The time has come to unite the ranks of jihad under the leadership of the Islamic State…it will emerge as a united, strong, and orderly state!” Another account shared their belief that “maybe it’s possible an alliance between AQ and Dawlat.” Regardless of these rarer but notable instances, the ability to repair the relationship between the two groups would need to overcome a long history of direct conflict, animosity, and leadership personality differences – feats that may seem highly unlikely.

This final category is not a narrative but is still important to mention because it constitutes online strategising by IS supporters: admins of pro-IS chats on Telegram created spaces dedicated to coordinating anti-AQ take-down campaigns. They directed like-minded supporters to infiltrate AQ Telegram groups and either debate AQ adherents or report any AQ-related content as “terrorism” to moderation systems in an effort to disrupt them. Such tactics are not new but within the wider context of Zawahiri’s death, these campaigns weaponising moderation tools against other extremists act as a form of vengeance and celebration within a virtual environment.

Despite this Insight’s focus on online dynamics, it is crucial to situate the discussion within offline realities. Now that Zawahiri has been eliminated, scholars, journalists, and independent researchers are examining possible future trajectories for not only al-Qa’ida but IS as well. Researchers are considering how perceptions of a weak Taliban might potentially drive Salafi-jihadists towards ISKP if it is perceived to be the stronger group while also noting that ISKP seeks to grow in Afghanistan. Others offer a variety of threat assessments analysing the danger the AQ core/AQ affiliates pose and the ways in which current financial as well as “organisational weakness” (including Zawahiri’s shortcomings) have weakened further aspirations for the group. Some larger looming questions centre on who is capable of inheriting the position of leadership, how might this individual’s leadership style influence future directions, and how this could impact US geopolitical relationships.

Regardless of ultimate outcomes, continuing to monitor extremist chatter across platforms and both official and unofficial propaganda outputs from AQ and IS offers an opportunity to assess developing narratives during periods of transition.