Although many researchers, practitioners, and policymakers are concerned about identifying and characterising online posting patterns of violent extremists prior to their engagement in violence offline, little is empirically known about their online patterns generally, or differences in their patterns compared to their nonviolent counterparts particularly. In this study, we expand our prior research on the online behaviours of violent and nonviolent right-wing extremists (RWEs) by examining posting typologies that characterise the extremist posting behaviours of each of the two user groups. Here we drew from a unique sample of violent and nonviolent RWEs to develop and compare their online posting typologies within a sub-forum of the largest white supremacy web forum, Stormfront. Posting typologies were constructed based on users’ posting frequency and their emotive content using sentiment analysis. We identified several noteworthy posting patterns that may assist law enforcement and intelligence agencies in identifying credible threats online.

First, super-posters made up a noticeably small proportion of users compared to all other posting typology categories for both the violent and nonviolent sample groups. In other words, the fewest number of users comprised this posting category (see Table 1 and Figure 1). 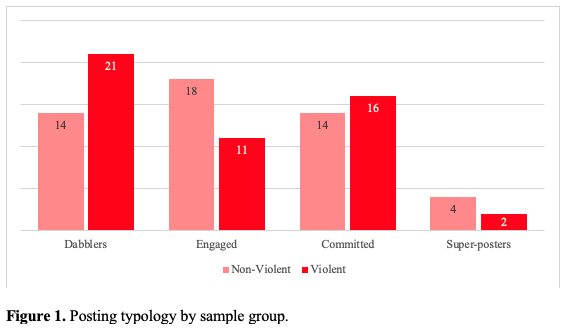 This finding comes as little surprise, given that previous research has overwhelmingly found that super-posters make up a very small proportion of all posters in online spaces that facilitate extremism. Yet research suggests that these user types, whether in RWE online communities or online communities in general, tend to dominate much of the online discussions and might be opinion leaders who influence the attitudes, beliefs, motivations, and/or behaviours of others. Perhaps it is the case that these super-posters were the most influential posters in our sample, but this requires further exploration. Having said that, the violent users in the current study consisted of a large proportion of the least active posting typology (i.e., the dabbler posters) than their nonviolent counterparts. This again comes as little surprise, given that recent work on the online behaviours of RWEs found that those who are actively involved in violent RWE activities offline tend to be concerned that law enforcement officials or anti-racist groups are monitoring their online activities and may therefore modify their posting activities to avoid detection.

Empirical research similarly suggests that violent members of RWE movements are largely clandestine, often paranoid because of the violence they engage in, and for this reason are concerned about revealing their identities. With this in mind, it may be the case that the violent RWEs in the current study were concerned that by posting in an online space that can be publicly viewed, they may be putting themselves in a vulnerable position and could become the subject of an investigation from anti-hate watch-organisations or even law enforcement. This most likely had an impact on the content that they posted on the site and the results of the study in general. Nonetheless, a surprising finding was that the violent users comprised a slightly larger proportion of committed posters than the nonviolent users. This is an important finding, as the committed posters were among the most active posting typology in the study. Research suggests that the volume with which an individual communicates with members of a particular group is associated with their level of social influence. Perhaps the violent committed posters were among most influential posters and opinion leaders in our sample based on their online posting composition. Regardless, this requires further exploration.

Second, across both the violent and nonviolent sample groups, there was a clear incremental increase in the number of users making up each adversary posting typology, with fewest users in the most active posting group and the greatest number of users in the least active posting group. In addition, across four of the five adversary posting typologies (i.e., the committed, engaged, dabbler, and non-posters) for the violent and nonviolent users, their typology patterns were generally comparable (see Figures 2-4). 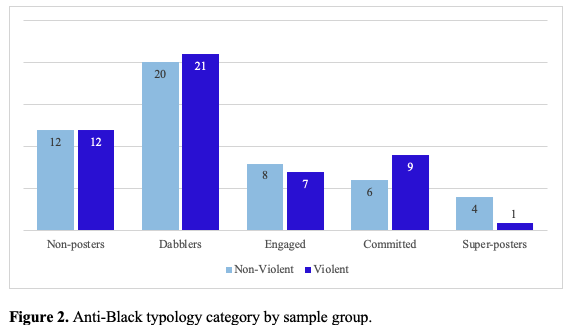 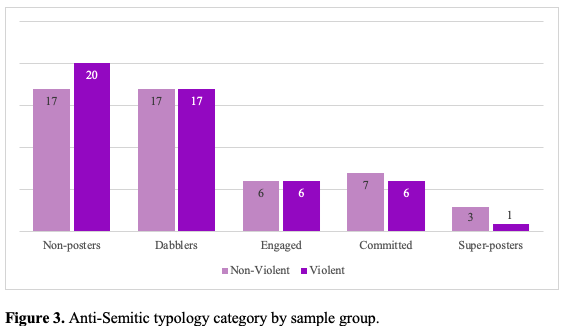 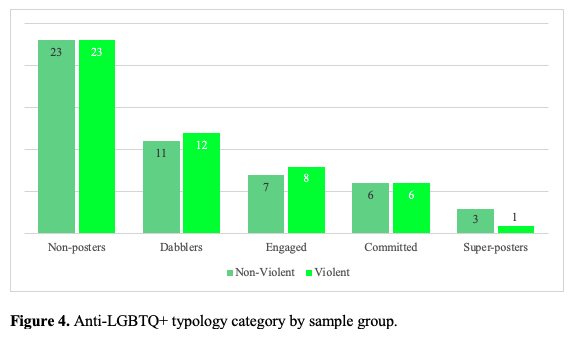 This finding is supported by empirical research which found that nonviolent RWEs tend to be much more active online than their violent counterparts in general. Research has also found that nonviolent RWEs tend to post a larger proportion of ideological posts and those targeting their adversary groups than violent RWEs. It may be the case that the nonviolent group in our study perceive their role in and, by extension, engage with the RWE movement as ideologues, thus providing ‘conceptual tools’ that can be taken up by others involved in RWE violence, which has been reported in empirical research. At any rate, the results presented here strongly suggest that the presumed positive association between posting frequency and risk of extremist violence may not be so straightforward. This is a question of particular policy relevance that should be investigated in future research.

Third, an assessment of the sentiment expressed by each adversary posting typology across samples revealed that discussions about Jews tended to be the most negative, followed by discussions about LGBTQ+s and Blacks (see Table 3 and Figure 5). 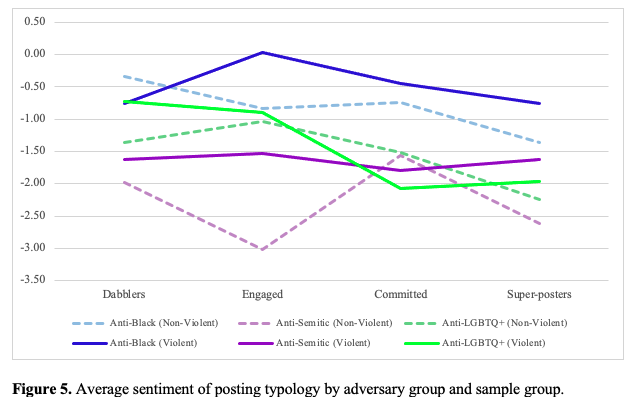 This finding aligns with empirical research suggesting that anti-Semitic discussions are rooted in RWE ideologies and in much of the RWE rhetoric expressed online, including in RWE discussion forums, social media sites, and fringe platforms. However, this finding contrasts with other recent work which generally suggests that the sentiment about LGBTQ+s in RWE forums is more negative than sentiment about Jews and Blacks. This finding also differs from some research on offline racist leaders and followers. Raphael Ezekiel, for example, in his ethnography of neo-Nazi and Klan groups in Detroit, USA found that leaders tended to focus on Jews as the central enemy, with African Americans, Latinos, and Asians as mere pawns of the Jews. The followers, on the other hand, focused on Black people as the central enemy with little interest in Jews. Instead, followers had to be taught to hate Jews. This finding was largely confirmed by Joshua Freilich and colleagues in their macro-level assessment of general theories of crime and politically motivated violence by the extreme right. It may then be the case that some of the nonviolent and violent users in our sample are also RWE leaders who are teaching followers about the most serious threat to the survival of the White race (i.e., ‘the Jew’), but this finding requires further exploration.

Importantly, though, nonviolent users in the current study were generally more negative in each adversary typology than violent users. Again, research suggests that the online behaviours of nonviolent RWEs tend to reflect one of an ideologue wherein they post a large proportion of messages targeting their adversary groups – much more so than their violent counterpart. Nonetheless, one notable difference in the sentiment expressed by each sample group was that the violent committed posters were generally more negative in their discussions about their adversaries than the nonviolent committed posters. As with the earlier findings regarding posting frequency, the results here indicate that the relationship between posting sentiment and the risk of violence is not simple. It is a mistake to assume that those users posting the most negative content are necessarily users to be violent. This supposition does appear to hold in some adversary contexts, and across some typology categories, but it is not universally true. Further assessment and elaboration of the nuanced relationship between online sentiment and offline violence are required.

For more on these findings and the nature of the study in general, we encourage you to read the full manuscript which was recently published in Studies in Conflict & Terrorism.

Ryan Scrivens is an Assistant Professor in the School of Criminal Justice at Michigan State University (MSU). He is also an Associate Director at the International CyberCrime Research Centre (ICCRC) and a Research Fellow at VOX-Pol.

Garth Davies is an Associate Professor in the School of Criminology at Simon Fraser University (SFU).

Tiana Gaudette is a PhD student in the School of Criminal Justice at MSU.

Richard Frank is an Associate Professor in the School of Criminology at SFU and Director of the ICCRC.