On Saturday, 14 May 2022, 18-year-old Payton Gendron drove to a supermarket in Buffalo, NY, live-streaming himself on Twitch as he shot thirteen people, killing ten. Records of his social media content circulated online shortly thereafter, including a 180-page manifesto espousing racist, anti-Semitic, and conspiratorial rhetoric. According to the document, Gendron chose that supermarket because it was located in a predominantly Black area, which served one of his central motivations: The “Great Replacement Theory”, a conspiracy theory which posits that the white race is being systematically replaced by non-whites. In many cases, this effort is believed to be spearheaded by powerful Jewish entities.

Several of Gendron’s tactics, as well as parts of his manifesto, were copied directly from that of Brenton Tarrant – the terrorist who live-streamed himself murdering 51 people and injuring 40 more at two mosques in Christchurch, New Zealand in 2019. Despite the explicit proof of the Buffalo shooter’s hate-driven motivations being rooted in far-right, white nationalist ideologies, recent reactions to the attack from right-wing corners of social media exhibit deflection, skepticism, and outright denial of reality.

Blaming the Left & the Mainstream Media

In the days following the shooting, right-wing media pundits were quick to divert attention away from what drove the attacker to violence and back towards Democrats and the mainstream media. Arguments from personalities like Candace Owens and Jack Posobiec were largely centered around one talking point: That the deadly parade attack in Waukesha, WI, which occurred in November of 2021, should have received similar attention and framing as the terrorist attack in Buffalo. 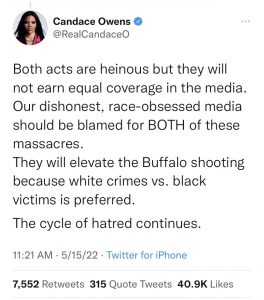 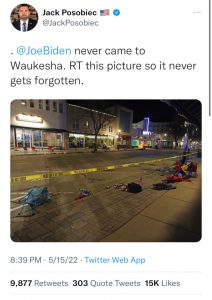 Notably, the Waukesha attack did garner mainstream media attention at the time, and the motives of the driver, Darrell Brooks Jr., have not been proven to be comparable to that of Gendron. Still, like Posobiec, users on far-right Telegram channels have criticised Biden for acknowledging the tragedy in Buffalo but not the one in Waukesha – an entirely false claim, easily debunked by a video of Biden remarking on the event just one day after it occurred. 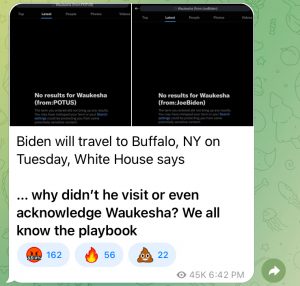 Across multiple platforms, users continue to weave anti-Ukrainian/pro-Kremlin narratives into misinformation about the Buffalo terror attack, primarily due to the presence of a Sonnenrad symbol on the shooter’s clothing and manifesto. Because the Sonnenrad has also been worn by members of the Azov Battalion, a neo-Nazi regiment in Ukraine, the perceived correlation has emboldened people on Twitter and Telegram to conclude that Gendron was somehow affiliated.

However, as indicated in a recent report by the Institute for Strategic Dialogue, the Sonnenrad symbol is not at all unique to Azov Battalion; its origins as a hate symbol trace back to the 1930s in Nazi Germany. Most importantly, there has been no evidence to support any connection between the Buffalo shooter and Azov Battalion. It must be noted that while this speculative falsehood has been spread by both right- and left-leaning social media users, the end result is the same: A distraction from the reality of domestic extremism’s ubiquity on American soil. 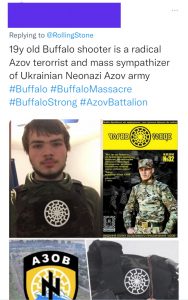 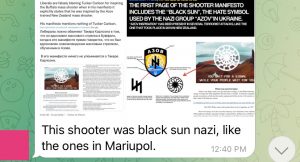 As is often the case in the wake of mass shootings and terrorist attacks, users on far-right social media have proposed that what happened in Buffalo was a false flag operation or psyop orchestrated by the FBI or CIA. Several comments on Telegram and Instagram cited the shooter’s direct inspiration from Tarrant as ‘proof’ of this allegation, rather than a mere indicator of extremism’s inherently memetic nature. 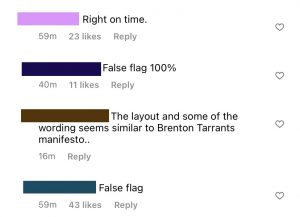 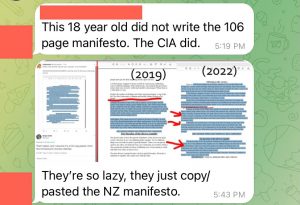 In QAnon groups on Telegram, adjacent narratives managed to incorporate Q drops – or the cryptic message board posts central to QAnon – and key figures like John Podesta, a main character in the QAnon precursor conspiracy theory known as Pizzagate. 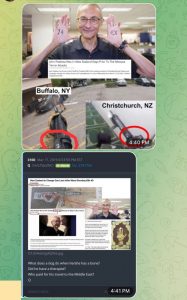 The false flag conspiracy theory is often accompanied by right-wing paranoia over second amendment rights in the US, where proponents argue that Democrats have deliberately coordinated mass shooter events in order to justify stricter gun laws. The gun control spin on the Buffalo shooting has been promoted by Congresswoman Marjorie Taylor Greene, who boasts a known history of pushing far-right conspiracy theories, and Congressman Matt Gaetz, who tweeted his public support of “replacement theory” narratives last year. Identical theories spread following the mass shootings at Sandy Hook Elementary School in 2012, and at a Walmart in El Paso, TX in 2019. 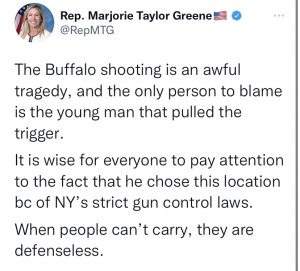 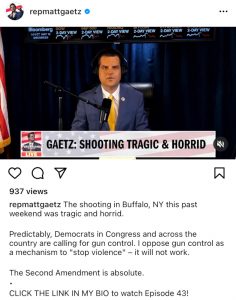 Reactions like these are often treated as somewhat of a spectacle in the short-term. But what do they mean for the future? What are the lasting implications of this highly repetitive rhetoric, where the same people who push extremist talking points are always the first to deny their own accountability?

“Whether the lack of accountability is intentional or truly believed by them, it works in their favour regardless because it contributes to anti-government, mis/disinformation, and distrust of the media,” said Kesa White, a program research associate at American University’s Polarization and Extremism Research Innovation Lab, who has been following the aftermath closely on social media. Jon Lewis, a research fellow at George Washington University’s Program on Extremism, finds that responsibility is deflected by promoters of far-right rhetoric not just because it serves their agenda to do so, but also because they don’t believe the burden falls on them in cases of online radicalisation. “In their minds, the online ecosystem didn’t commit the violence,” said Lewis, “They merely enabled it and provided the environment for that radicalisation to occur.”

Significantly, these narratives are shared among more esoteric right-wing groups as well. QAnon researcher Mike Rains, who goes by @pokerpolitics on Twitter, finds that when it comes to Q followers, theories about what happened in Buffalo don’t stray all that far from the more mainstream conservative sentiments, like blaming the media’s framing of the event. “They are pointing out other recent mass shootings not getting as much media attention as proof of a media-driven narrative that only white mass shooters get wall-to-wall media coverage,” said Rains.

At first glance, the outlandish responses to the Buffalo terror attack might appear acute and temporary, likely to be forgotten once the news cycle discards the story as a primetime feature. But the conspiracy theories surrounding these events on social media are merely recycled versions of their predecessors; without meaningful intervention, they are all but guaranteed to follow – if not directly inspire – the next inevitable and harrowing act of offline violence.