The Protocols of Antisemitism: Cross Ideological Fixation on “Jewish Power”

“They let James Foley die, they let him die and they didn’t release her but guess what? Maybe they’ll have compassion for f**king Jews.” So said Faisal Akram whilst standing in a synagogue in Texas holding four Jewish community members hostage. The dramatic phone call, published by the Jewish Chronicle, between Akram and his brother, gives more information about his extremism, radicalisation and antisemitism than Akram had probably intended.

The journeys that extremists and terrorists take, both physically and digitally, are often unique and deeply instructive in explaining their final target selection. The 4,600-mile journey from Blackburn to Colleyville, Texas on its own raises some questions for intelligence and law enforcement agencies across the world. However, the digital journey that took Akram to a point where he thought it was rational to target the “f**king jews” raises a lot more question for us as a Jewish community and as a wider society.

The Jewish Chronicle published an article claiming that part of Akram’s online journey took him to the videos of the late Pakistani preacher Israr Ahmed, the founder of the Tanzeem-e-Islami organisation. The report highlights how Ahmed’s online repository of videos included the video titled ‘New World Order, Jew World Order’ amongst others, in which he calls Jews “this cursed race” and the “ultimate source of evil.”

It is noteworthy that missing from Akram’s phone conversation and from his declaration against the “f**king Jews” was any reference to a global jihadist movement; he did not talk of Islamic State (IS) or other subsidiary groups. Instead, he focused his anger on the United States for incarcerating Aafia Siddiqui (the point of his fixation). Akram believed that his best chance of securing the release of Siddiqui (which he claims did not happen during the negotiations involving James Foley and IS) would be to take Jews hostage, which seems to suggest that he in part seemed to believe that Jews were uniquely powerful and influential. According to one of the hostages in the Colleyville synagogue, Jeffery Cohen, Akram repeatedly told the hostages that “Jews pull all the strings. Jews control the banks. Jews control the media. Jews control the government.”

The theory of alleged global Jewish power and dominion is not new. In the early 20th century, a forged Russian propaganda leaflet alleging to be a set of minutes detailing the Jewish plan for world domination first appeared under the title ‘The Protocols of the Elders of Zion’. Despite being paper printed nearly 120 years ago and from a Russian background, the same theory is shared online under different banners, ideologies and framing.

This is why Israr Ahmed’s videos are so noteworthy, such as the one titled “New World Order, Jew World Order” and others which, according to the Jewish Chronicle, Ahmed quoted from the Protocols. Neo-Nazis and conspiracy theorists operating in the UK and US today talk in the same language. This is not an exaggeration. In February 2022, a channel on Telegram titled ‘Covid-1984 Jew World Order’ forwarded a post from another channel with screenshots from what they called “the Protocols of the learned elders of Zion.” In December 2021, the same channel published a link to the “full audiobook” of the Protocols. 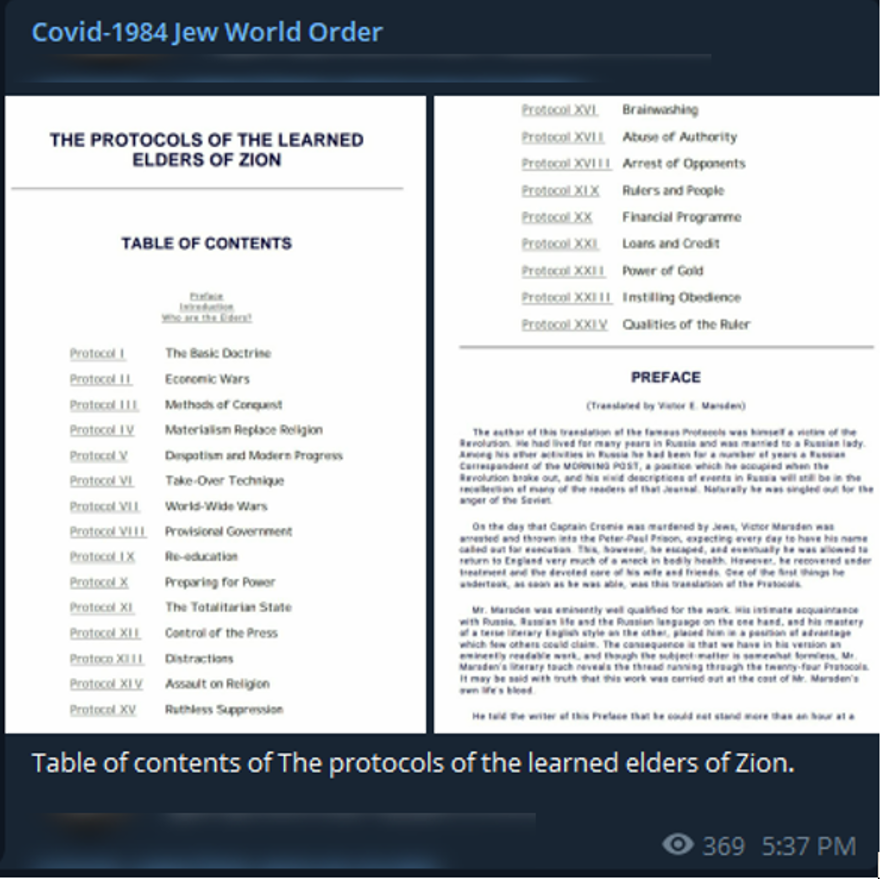 Some four days before his attack, Bowers shared on his Gab account a meme edited to reflect his deeply antisemitic view. It showed a cow (representing ordinary people) choosing between an alleged choice of left or right, but which was ultimately all controlled by the antisemitic caricature of the Happy Merchant under the banner of ‘ZOG’, the ‘Zionist Occupied Government’. The message here reflects the same sentiments codified in the Protocols of the Elders of Zion and among some elements of extreme anti-vax conspiracy groups. In these worldviews, Jews (in various incarnations) control the world, the levers of power, institutions and processes. 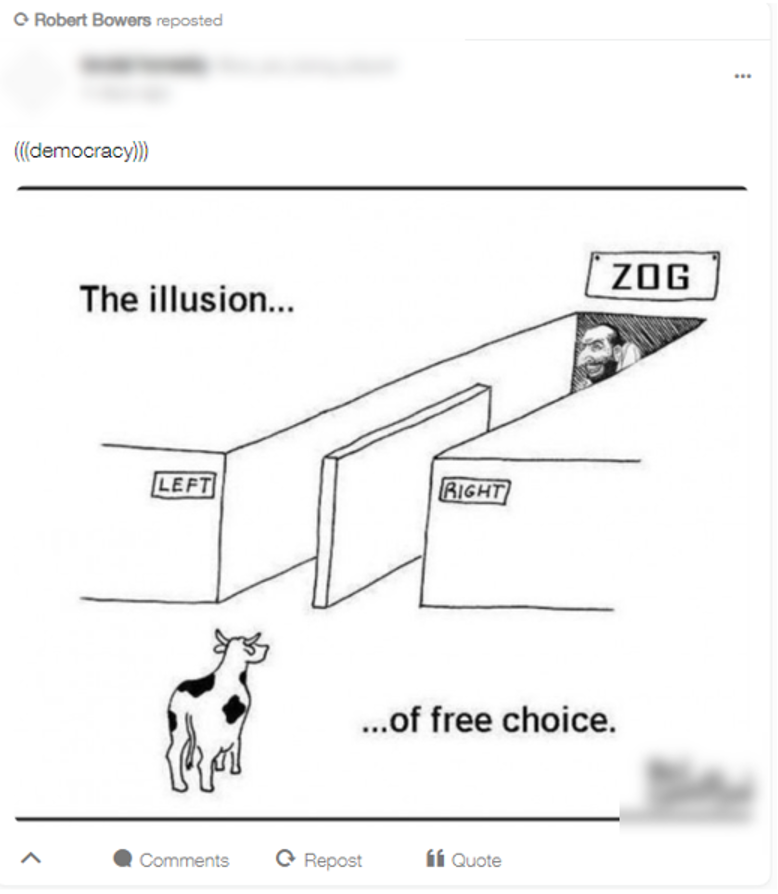 On 9 October 2019, Stephan Balliet attacked a synagogue in Halle, Germany on Yom Kippur, the holiest day of the Jewish calendar. Immediately prior to his attack, he filmed himself listing all that he saw ill with the modern world. He ends his litany claiming that the root of all this evil “is the jew.”

At first glance, there should be no ideological, or other, connection between extreme right-wing individuals and those acting from a jihadist orientation. Their goals and worldviews are diametrically opposed. However, among the key uniting factor bringing them together is their view of global Jewish power and influence (as other academics and authors have highlighted). Bowers and Balliet said it explicitly, and Faisal Akram showed it by choosing a synagogue (not a military base or government building) as his target to reach his goal of releasing Aafia Siddiqui. Akram believed Jews would be seen as the most valuable hostages to take and therefore ones whose release the US government would negotiate.

This is why the Jewish Chronicle report on Israr Ahmed’s material is so important; we must take material that spreads these conspiracies and fuels these fires seriously. Terrorism does not begin and end with illegal violent content; it is a spectrum that encompasses and involves harmful conspiratorial content that provides the ideological coals for the eventual, inevitable fire.