Following the Russian invasion of Ukraine, extremist milieus online focused their attention on news of the war. White supremacist, far right, and anti-US government spaces were flooded with a wide array of narratives about the ongoing conflict including both pro/anti-Russian posts, conspiracy theories, antisemitic remarks about Ukrainian President Volodymyr Zelenskyy, and comparing the US government to Russian authoritarianism among other topics. As Marc-André highlighted, narratives from these individuals “are not homogenous.” For Islamic State supporters however, sentiments about the war seem to be more unified and consistent. This Insight will examine pro-IS narratives that have appeared in their decentralised online ecosystems on Facebook and Telegram.

On Facebook, a pro-IS unofficial media outlet (also present on Twitter and Telegram) with a large following advertised its continuous coverage of Ukraine asking followers to “contribute to the channel’s publication on social media sites related to the ongoing events” in efforts to boost its profile. Another post from the same source joked, “Two more wars like Ukraine and the fame comes running” providing a clear example of how pro-IS outlets value their account popularity on open social media where they can extend a wider reach beyond a more closed echo chamber. Although the page makes derogatory remarks about both Ukraine and Russia, it also frequently posts general news updates without any specific commentary. One comment thanked the outlet for its coverage of Ukraine, “This is the type of content that I’ve been looking for” and complimented it for its “strength” to overcome numerous Facebook bans.

Other narratives expressed disdain for Ukraine and Russia along with wishes for their mutual destruction. Unlike divisions among white supremacists or far right and anti-government advocates, pro-IS supporters viewed both countries as their enemies while celebrating the outbreak of war in hopes that it will lead to societal collapse on a global scale: “My Lord, strike the tyrants Russia and Ukraine and burn them with fire” and “I hope from God that war will turn to the heart of Europe and everyone will fall into the war…let them hit nuclear.” One graphic shared in an IS Telegram chat succinctly summarises this vein of pro-IS supporter sentiments: 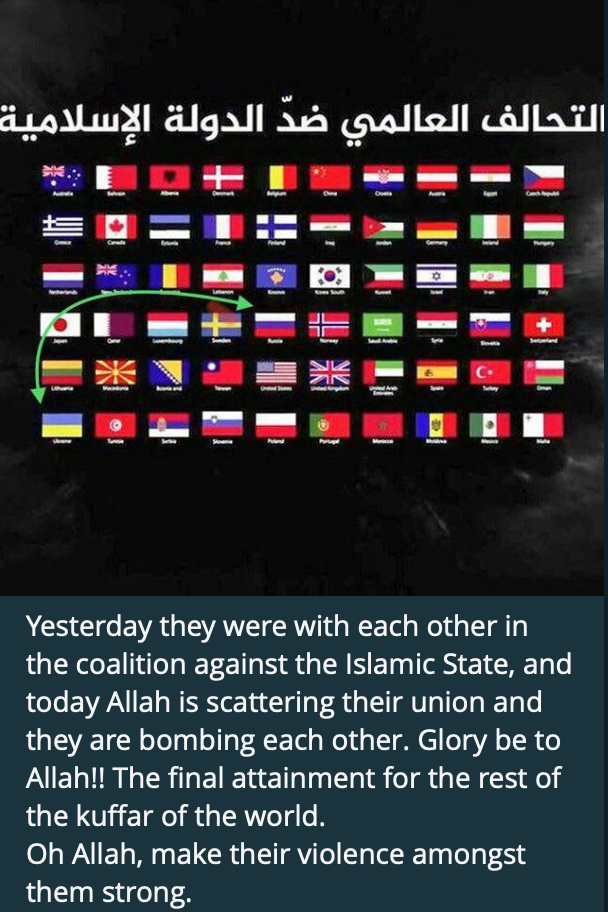 Narratives incorporating historical memory tended to coalesce around the Gweyran prison break, the Battle of Baghouz, and the Second Chechen War. A handful of these accounts included somewhat inaccurate portrayal of events about Gweyran Prison and Chechnya. Some comments focusing on Kiev compared the siege on the city to the IS Ghwaryan Prison riot. For example, one post claimed that the Ghwaryan riot lasted 12 days with poorly armed IS prisoners while Kiev had only endured twelve hours of Russian bombing – implying that Kiev was nothing in comparison to Islamic State. It is worth noting that the prison riot lasted 10 days (from 20 January – 30 January 2022) with the participation of external coordination, including suicide bombers, by IS fighters in the surrounding neighbourhoods.

In response to images of bombed and collapsing buildings in Ukraine, other IS supporters drew connections with Baghouz, “O’ God, grant them days like the days of Baghouz.” Comments minimised the destruction in Ukraine with claims that “this is nothing compared to what happened in the cities of Raqqa, Mosul, and Baghouz.”

Accounts on Facebook and Telegram also shared video footage from the Second Chechen War and the destruction of the capitol city of Grozny. Occasionally, misleading information also circulated including an alleged video of Ramzan Kadyrov’s soldiers praying before entering battle on Russia’s behalf accompanied with the description “Jihadists who once fought against Russia now join the fight against Ukraine as Russia’s loyal militia!” (However, as Business Insider reported, the original Instagram account that released the footage has been known to manufacture misinformation.) Despite such claims by the IS supporter, Kadyrov and his forces have previously “supported Kremlin military operations before in Syria and Georgia” as well as Ukraine in 2014. Although it is true that his father, Akhmad Kadyrov, fought Russia in the First Chechen War, he later changed allegiances and was elected as the Putin-approved President of the Chechen Republic in 2003 only to be assassinated the following year. Ramzan Kadyrov, however, has now replaced his father as Head of the Republic and IS supporters continue to direct insults, such as “murtad/murtadin” (apostates), towards him and his soldiers for acting as extensions of the Russian State. 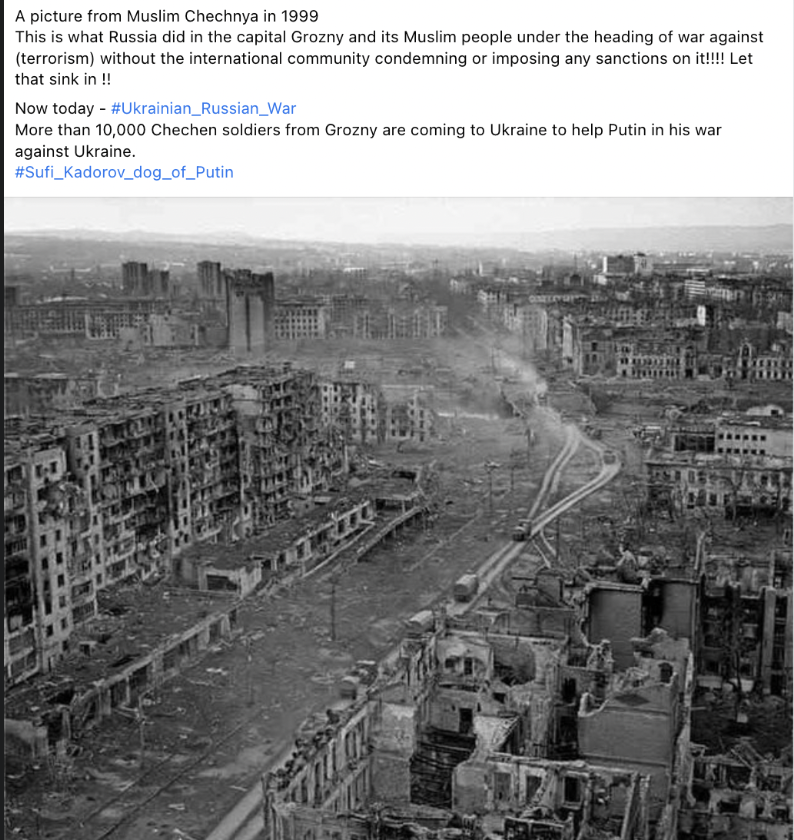 On a more generic level, comment sections were filled with messages praying for the destruction of Russia, Ukraine, Europe, and the wider category of “kuffar” nations in addition to remarks about how war between European nations gave them something to enjoy. A commonly repeated supplication included, “O’ God, strike the oppressors with the oppressors” and “make war between them [kuffar nations].” Pro-IS supporters also sought to warn their audiences that Muslims who participate in the war on either the Russian or Ukrainian side cannot be martyrs because martyrdom “is only for the people of faith who fight so that the word for Allah is supreme.” Other messages highlighted hypocrisies in the global response to Ukraine versus wars in Syria, Iraq, Palestine, Yemen, Bosnia (Bosnian War), and Kashmir.

Finally, mirroring the messaging found in white supremacist, far right, and anti-US government circles, some individuals incorporated conspiracies into their narrative about secret “globalist” plots to bring about World War III, reduce the world population, and start “Armageddon.” This was not nearly as common as the other topics, but it was occasionally sprinkled throughout.

It is important to state that some of these narratives, such as those that highlight inconsistencies about world sympathy and solidarity for some countries over others, are not inherently pro-Islamic State or, in a wider sense, pro-Salafi jihadist. There also may be more prominent themes featured in various pro-IS networks outside of the accounts, channels, and chats that I have been able to observe, but hopefully this summary provides some understanding into the types of rhetoric and narratives that pro-IS supporters are promoting about Russia’s invasion of Ukraine.

When taken by itself, gathering information on what extremist milieus are saying may admittingly appear pointless, but when examined together in relation to additional data points (i.e. their responses to other events), it can provide insights in several ways: 1) how extremists build new narratives onto already-established narratives, 2) how extremists apply varying degrees of historical revisionism, 3) which narratives gain wider popularity over others, and 4) similarities between extremist rhetoric across ideologies, and 5) the ways in which misinformation and disinformation circulate in extremist online ecosystems (as demonstrated by IS supporters unknowingly, or perhaps knowingly, sharing manufactured footage about Ukraine).

A Word of Caution: IS Foreign Fighters

Moving forward, it will be important to note any instances of pro-IS supporters and other Salafi-jihadists travelling to the front as foreign fighters. White supremacist have joined fringe militias on both the Russian and Ukrainian sides and although attention has rightly focused on concerns about these extremists, pro-IS chatter indicates that there are ongoing discussions about also taking advantage of an active war zone to join as foreign fighters. If there are future documented instances of IS supporter foreign fighters, the wider global community should remain extremely wary of the Kremlin promoting narratives that accuse Ukraine of being a hot spot for white supremacist and IS fighters alike to justify further Russian aggressions. One potential factor that could result in IS supporter foreign fighters joining the fight against Russia is their focused disdain for Putin and Kadyrov – this should never be interpreted as these individuals taking a pro-Ukrainian stance despite the claims Russian media may begin to generate if these instances do occur.