Towards a Truly Post-Organisational UK Far Right? The Usefulness of a Newly Emergent Concept

Despite recent hype around a post-organisational phase in extremist movements, the notion of a decentralised, leaderless group or movement – at least on the far right – is not a recent innovation. As far back as 1992, Louis Beam coined the concept of ‘leaderless resistance’ to describe the need for white supremacists to abandon planning in large groups, and to instead “take action in small cells of one to six men.” Coming in the wake of the 1988 Fort Smith Sedition trial, where fourteen white supremacists were accused of plotting to overthrow the United States Federal Government and conspire to assassinate federal officials, and the associated belief among extremists that it would destroy the whole of the American white supremacist movement, Beam encouraged this shift to smaller far-right organisations in order to limit the scope of damage done by the destruction of group organisations and infiltration.

Fast-forward to the present day and certainly the sheer number of far-right terror groupuscules, alt-right influencers, and extra-parliamentary actors – without membership lists, hierarchical structures, or formal orders of association – have blossomed as a result of the Web 2.0 and alt-tech age of the Internet. With a lot of individuals and groups nowadays simply existing as loosely affiliated and incorporated organisations on an online Telegram chat or Discord server, the ability to quantify movement cohesiveness, unity, and impact is becoming more and more difficult for researchers and practitioners alike. In a forthcoming contribution for Routledge’s Handbook of Far-Right Extremism in Europe, I apply the concept of post-organisation to the UK far-right protest scene. Using measures of organisational disunity and strategic diversity and ideological unity as a proxy for the level of post-organisation, I hope to shine a light on how these post-organisational dynamics work out in practice.

Here, post-organisation is defined – in relation the far right – as a decentralised, non-hierarchical movement that requires little or no organisational unity in order to work broadly in the same tactical direction and towards similar ideological goals.

In the chapter, I first test the extent to which the UK far-right movement is organisationally unified, as measured by the number of groups that ebb and flow over time. Taking the UK as a case study and CARR’s FRGB dataset as a starting point: there has indeed been a consistent upward trend of subnational protest organisations in recent years.

This increase in the volume of actors is not surprising for the UK scene. As written about by Dr Andreas Dafnos and myself elsewhere, the implosion of key electoral actors (like the British National Party and the UK Independence Party) and the rise of others aping key elements of the movement’s agenda has both led to broader fragmentation and to a more closed opportunity structure for such organisations to develop into more formal political actors. What is interesting in Figure 1, however, is the more recent slowdown in fragmentation. This suggests that there might be opportunities for a predominant actor to appear on the UK scene and unite otherwise disparate far-right ideological elements. It is important to note here that the FRGB dataset does not always allow us to see the exact number of groups that participate in a protest event because sometimes we do not have information to hand to identify groups exactly. These are therefore based on counts abstracted from third-party sources (e.g. journalist reports, anti-fascist bulletins and social media records) that might actually be larger than those captured.

Another test that I use in the Routledge Handbook chapter in order to establish the extent of post-organisation in the UK far-right scene are the reasons that they mobilise nowadays. As shown in Figure 2, the most popular reasons in the past ten years have tended to be some expression of anti-Muslim bigotry, including fears about the Islamisation of UK public life or spreading false claims about the nature of child grooming being an inherently Islamic problem. 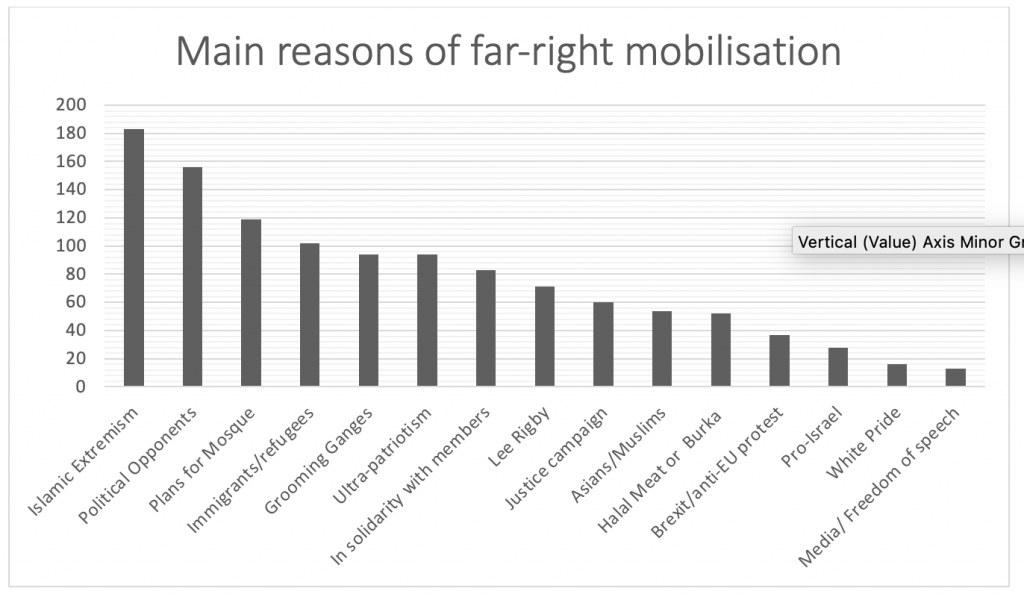 Looking at bit more closely at the proliferation of mobilisation rationales, visualised in Figure 3, it is clear that the trend towards ideological fragmentation is not so pronounced as from the organisational perspective (see figure 1) and peaks around similar points as the number of organisations that are present on the UK scene. In Q3 of 2015, Q2 of 2016 and Q2 of 2018, there are clear upticks in the range of rationales given – especially with the onset and emergence of white supremacist organisations (such as National Action and splinters of the BNP and English Defence League). Of course, there is a high degree of ideological unity in the core part of this period. Moreover, the level of rationales proliferating could also simply be an organic outgrowth of an uptick in protest activity by the likes of the Democratic Football Lads Alliance, Patriotic Alternative, and English Defence League.

A final test that I use in the chapter to get to the bottom of this post-organisational phase in movement development is the diversity of tactics used by organisations and how they differ over time. Contrary to the trends above, what is noticeable here is how the UK far right seems to be converging on strategies of demonstrations, counter-demonstrations, and disruption/vigilante type events over time in order to express their political views. This is again a symptom of the closed opportunity structure when it comes to engaging in formal party politics, but also opens up such forums as a meeting ground for far-right activists – with many co-sponsored demonstrations happening around key events in this period (e.g., Lee Rigby’s death, the Brexit/EU referendum, and the recent Statue Defence protests in 2020).

The supposition that all forms of far-right activism are in a post-organisational phase is slightly premature – especially in the offline context. In the UK, whilst there has been a proliferation in organisations, ideological rationales, and tactics used to achieve political recognition and salience, the more recent picture seems to be a partial reversal of this trend, that is greater tactical unity and reduced organisational fragmentation. Of course, data from more countries (such as those in the CREX CFP dataset), a longer time period, and an analysis of online versus offline trends would offer a fuller picture; but in the UK case – harnessing the insights obtained from the FRGB Dataset – it appears that the far-right movement is becoming more cohesive, united, and impactful, shifting towards street protest and a more race-based  – rather than cultural – forms of discrimination. Whether a predominant actor will emerge is yet to be seen, but it does pose the question of what could be the next leading actor and whether it could bring the post-organisational phase to an end.