The Australian far-right is using a diverse range of online tools to fundraise and solicit donations. In this ecosystem, the messaging app Telegram plays a significant role — providing an entry point into a broader content and financial network, and facilitating international connections.

In a recent report for ASPI, I examined a sample of nine Australian Telegram channels that share right-wing extremist (RWE) content and found they were connected to more than 20 different funding mechanisms, platforms and tools. This preliminary map included live-streaming platforms such as DLive and Entropy that allow ‘tipping’ and other support. Financial opportunities were promoted by the sale of merchandise and subscription platforms such as Patreon and SubscribeStar. Donation requests via Buy Me a Coffee and PayPal, or via various cryptocurrency wallets, were also posted in the channels for purposes ranging from legal fees to general support for content creation.

The use of these platforms is not unusual globally, and suggests the Australian far-right observes and emulates, if not exchanges best practice, with similar entities overseas (not to mention the broader social media influencer ecosystem). The tools in use are similar to those found in a recent Bellingcat review of the UK far-right ‘influencer’ online ecosystem. Likewise, Institute for Strategic Dialogue analysis in 2020 examined ”73 US-based groups involved in promoting hatred against individuals on the basis of their gender, sexuality, race, religion or nationality” and found many of the same online funding mechanisms.

Of course there’s debate about how to balance civil liberties with the risks posed by online communities that promote RWE ideology (and much of that activity isn’t illegal), but a better understanding of online funding mechanisms is necessary, given the growing concern about the role online propaganda may play in inspiring acts of violence. The digital financing tools that may support and incentivise a right-wing extremist content ecosystem in Australia often seem to be used opportunistically, in part to build resilience to demonetisation and deplatforming efforts by regulators or platforms themselves.

The Role of Telegram

Telegram is not a financial platform, but among the sample of channels sharing RWE content examined in the study, the app appeared to act as a guide and important point of communication about donation opportunities with subscribers. Potentially because those running the channels feel their accounts are less likely to be removed than on platforms such as YouTube or Facebook, and as others have suggested, due to the perception of security offered by encryption and its ‘self-destruct’ function.

Fundraising links were often shared across the channel’s online presence, creating a network with a range of funding options and entry points. For example, I observed that one of the Telegram channels directed subscribers to livestream shows on YouTube and DLive while soliciting ‘tips’ on Entropy. Meanwhile, the video description section on its YouTube videos provided a link back to its Telegram channel, as well as promoted a range of funding mechanisms, including PayPal. 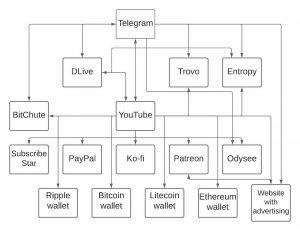 This ecosystem is particularly facilitated by Telegram’s forwarding function, which allows links from one public channel to be forwarded into another, creating a ‘road map’ for users to potentially expand the range of channels they follow and engage with.

Within the broader RWE content ecosystem in Australia, there are also Telegram channels dedicated to acting as ‘guides’ to RWE audio and video content, such as live streams on sites such as YouTube and DLive. Times and links to such content are posted in these channels with the goal of helping followers find and engage with it. Such activity helps to put a channel in front of more viewers and potentially find financial supporters for content.

Most of the financial platforms and services I examined had terms of service for users that prohibited hate speech. Yet the response by payment processors to far-right monetisation has been described as often ‘reactive and arbitrary’. The lack of transparency and accountability for account freezes and closures is also a longstanding problem.

YouTube has cracked down on several RWE figures monetising their channels after outlets such as BuzzFeed News reported on their use of the platform to generate income. One channel in our sample specifically cited YouTube’s demonetisation of their account as a reason why financial support was required.

Indeed, the history of public pressure leading to RWE deplatforming from funding platforms has arguably fuelled what Cynthia Miller-Idriss called an “entrepreneurial spirit within the far-right” in her book Hate in the Homeland. Most Telegram channels in the study offered subscribers multiple avenues for providing financial support, and in ways that appear calculated to build resilience to efforts at deplatforming.

For example, the video platform Entropy allows users to port their streams from other platforms such as YouTube, Twitch and DLive, and viewers can make ‘paid chats’. This means that, even if a YouTube or DLive channel is stripped of the ability to run advertising or accept tips, donations can still be collected on Entropy.

Several Telegram channels in our sample promoted livestreams, but rarely directed users to just one platform. Instead, they were more likely to post links to multiple sites including YouTube, DLive and Trovo, while encouraging users to donate and ask questions via Entropy.

The online funding mechanisms described in this report also serve as an additional point of connection between the Australian RWE milieu and those who share their views internationally.

For example, I observed pleas for support for Thomas Sewell’s legal fund, which the associated Telegram channel said could be provided in the cryptocurrency monero or via donation site Buy Me a Coffee, forwarded into North American RWE Telegram channels—some with more than 50,000 members. Sewell is associated with Australia’s National Socialist Network and the European Australia Movement, and is facing charges for armed robbery, assault and violent disorder as recently as June 2021.

Video clips of his alleged confrontation with a Black security guard in March, which resulted in an assault charge, were highly shared across a variety of local and foreign Telegram channels alongside the financial support request.

I also observed channels in the sample and associated individuals potentially solidifying connections to the international RWE ecosystem by appearing on British, South African and North American podcasts and live-stream shows, which were sometimes used to promote fundraising efforts and posted back on their associated Telegram channels.

Like platforms such as DLive and YouTube, Telegram wasn’t built to support a far-right content and financial ecosystem. And as terrorism financing expert Jessica Davis has pointed out, any policy response must grapple with a ‘blurring’ between the financial technology sector and what is more commonly seen as communications technology.

Telegram did attempt to set up a blockchain project and cryptocurrency, which founder Pavel Durov wrote “had the potential to revolutionize how people store and transfer funds and information” when integrated with Telegram. It was shut down after pushback from the US Securities and Exchange Commission. However, the project illustrates another potential crossover between fundraising, content creation and communication if such a scheme were to formally proceed.

To keep content producers on their platforms, technology companies will continue to provide new monetisation tools. And these will continue to be seized upon by a range of customers, likely to include far-right ‘influencers’ and other extremists. Efforts to tackle far-right fundraising must include greater transparency and accountability from these platforms, among other measures, while recognising the significant potential impacts such policies could have on civil liberties for a broad range of users.