In November 2019, the European Union celebrated a small victory: over 26,000 items of self-proclaimed Islamic State (IS)-supporting content, as well as channels and groups, were referred from nine online service providers, thanks to an action coordinated by Europol’s European Union Internet Referral Unit (IRU). Facebook has every reason to be pleased, too. They claimed a 99.6% proactive rate on terrorist organisations in Q1 2021, which means less than 1% of this type of violating content is reported by Facebook users. However, all these positive figures may paint a distorted picture of reality: Europol’s scope only concerns official propaganda posted by designated terrorist organisations, so any unofficial radicalised content remains under the radar (Amarasingam, 2020). In the same vein, social media companies’ takedown of IS activity probably leaves aside great volumes of more general violent jihadi content that is not explicitly branded as IS propaganda and, therefore, slips through the net of content moderation much more easily (Conway, 2020). Indeed, in addition to terrorist organisations, there are also private communicators, particularly on social media, who are supporters of violent jihad but who do not explicitly express their adhesion to any extremist organisation. Such actors communicate radicalised content in the midst of regular, non-extremist posts. By sharing content that moves away from IS’ military propaganda, such Global Jihad Movements (GJM) supporters engage in the fragmentation of violent Salafist propaganda and in a more diffuse online presence. As we will see, myth and eudaimonic content are two key types of posts in this process.

Extremists have long been aware of the possibilities offered by implicit or explicit polysemy, allowing for doublespeak and in their pretending that they only convey neutral content. Research on right-wing extremism points out the overlaps between extreme and radical right-wing organisations, the latter successfully skirting the line in terms of their discourse, delivering highly exclusionary rhetoric within the limits of legal speech. Consequently, clear-cut boundaries between right-wing extremist and radical actors are becoming increasingly obsolete (e.g., Ahmed & Pisoiu, 2019). A similar phenomenon can be observed in the Salafist context: identifying content advocating violent jihad by GJM supporters who do not express their adhesion to any extremist organisation is a more delicate operation than identifying content posted by organisations listed as terrorist ones or by their supporters whose affiliation is explicit. In this respect, identifying violent content posted by GJM supporters is akin to the challenges traditionally faced with right-wing extremist content (Conway, 2020). Like the extreme right, radical Salafism is not a centralised movement; it rather consists of an ecology of loosely-connected individuals with varying degrees of radicalisation, who have learnt to circumvent the community standards of the social platforms with doublespeak strategies.

Two types of social media content are particularly powerful to share extremist ideas through doublespeak strategies: myth, in the sense of Barthes, and eudaimonic content (Bouko et al., 2021). These two types of content are usually presented in image macros, in the shape of quotes or other short inspiring text coupled with visual background. The strategic use of visual content only increases their persuasive power (Bouko et al., 2021).

The Persuasive Power of Myth

Myth is a slippery concept. In the vernacular, myth is often synonym for fallacy. This might explain why Géré (2016) approaches the Salafist myth as “an ideological narrative which pretends to build a brand-new future based on true and superior values.” However, the relations between fact and fiction in myth are much more complex than a binary opposition. And this is precisely what makes it powerful. In his seminal book Mythologies, Barthes (1973) defines myth as a “type of speech defined by its intention” (p. 265). For Barthes, everything can be a myth as long as it has a mythical intention, and this intention is ideological naturalisation. In Barthes’ theory, a myth is composed of two semantic systems: a connoted level of ideological meaning coupled with a denoted level of literal meaning, whose function is to naturalise the connoted meaning in concrete denoted elements. This combination of denoted and connoted meanings makes myth a “depoliticized speech” through an emptying process: “The function of myth is to empty reality. […] In passing from history to nature, myth acts economically: it abolishes the complexity of human acts, it gives them the simplicity of essences, […] things appear to mean something by themselves.” The denoted, political signifier is impoverished and becomes a form for a connoted, essentialised ideological meaning, but does not disappear for all that. The power of the myth is based on authentic elements, as they lend it an illusion of denoted credibility, which the symbol does not, while they at the same time naturalise and essentialise these denoted elements. In sum, the myth is “a story at once true and unreal,” the power of which is based on the fact that it does not lie or hide any meaning, but distorts it in a naturalisation process.

Let’s see an example. In the Facebook post below, Emir Khattab, who fought during the Chechen wars and who was a pioneer of jihadi media, is referred to in a quote that calls for insurrection: “Arab leaders are slaves to the West. […] The time has come to free ourselves from these slaves.”

This quote consists of vague and decontextualised rhetoric of liberation, which leaves the door wide open for interpretations: violence might be the most logical means given that it was written by a jihadi who was not famous for his pacific mindset, but it remains one interpretation among others, since liberation in abstracto can also be performed through non-violent means. Again, quotes without any comment smooth the path towards implicit endorsement, which circumvents Facebook’s community services. But there is more than a doublespeak strategy: two processes increase the naturalisation of this content. Firstly, the linguistic construction of this quote makes it a monoglossic assertion that does not refer to, or recognise, alternative points of view and which, therefore, appears as presuppositional and taken-for-granted. Secondly and more interestingly, Khattab’s portrait consists of interwoven denoted and connoted meanings, which can make it appear much like a myth. His portrait is stylized: the smoothed features decontextualise it by erasing any trace of time passing, and the visual codes create analogies with Che Guevera’s portrait. Khattab is not merely a symbol or an example, but becomes a myth, i.e. an essentialised yet real presence of jihadi ideology, a naturalised “story at once true and unreal.”

Eudaimonic entertainment provides inspirational content that favours feelings of well-being and self-transcendence (Oliver et al. 2018 ; Rieger & Klimmt, 2018). They turn one’s attention inward to an increased interconnectedness with others and higher causes, so that one recognises elements of shared humanity in oneself that lead to feelings of elevation, gratitude, awe, admiration, as well as appreciation of beauty, excellence, hope and spirituality (Dale et al., 2020).

Eudaimonic content can take the form of quotes, popular wisdom or proverbs. Eudaimonic content is inspiring, and inspiring content is more likely to be shared, which, in turn motivates inspired users to spread it in order to inspire others (Ji et al., 2019). In propaganda contexts, this softened power of circulation of ideas is particularly worrisome.

Such content typically comes across as natural and taken for granted due to its monoglossic formulations in bare statements that do not refer to, or recognise, alternative points of view. In the same vein, quotes are often decontextualised and become essences. In our view, the force of eudaimonic contents lies in the possibility of transforming essences into empty shells that are ready for hosting connoted meanings according to the contexts in which they are used. And this also holds for Salafi-Jihadist propaganda. For example, eudaimonic content was prevalent in Instagram posts written by a Salafist influencer (Frischlich, 2021). This prevalence of eudaimonic content confirms that “terrorists inspire their followers; they don’t merely persuade them” (Glazzard, 2017), much like myth.

When used for ideological purposes, eudaimonic content is composed of two semantic systems: presupposed, depoliticised essences (meaning 1) become tokens for connoted ideology (meaning 2). This politicising process goes from the general to the particular through the addition of connoted ideological meaning. It contrasts with the myth as a depoliticised speech in Barthes’ theory, which goes from the particular to the general through impoverishment. When myth “transforms history into nature,” eudaimonic content in an ideological context transforms nature into history. In both cases, things appear to mean something by themselves.

The eudaimonic Facebook post below is built on taken-for-granted statements and connoted visual content. The image shows a group of lions walking in the direction of the viewer; the embedded eudaimonic text calls to “surround yourself with those who have the same mission as you”; the comment below the visual content indicates “in fact, as long as you fear Allah, they fear you… So you become a nightmare if you fear nothing but Allah.” All these sentences are monoglossic, taken for granted, and presuppositional. 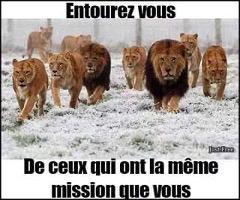 These sentences are particularly evocative while remaining implicit. The combination of the different elements of the post might be interpreted as an invitation to gather for the sake of violent extremism, but again, there are no explicit markers that allow to validate this interpretation. Here again, the author implicitly applies natural essences (eudaimonic reference to a mission) and presuppositional statements to the Salafi-Jihadist ideology in a strategy of doublespeak and ideological naturalisation: like myths, such eudaimonic posts seem to be self-evident.