The Darker Side of Social: QAnon Instagram Comments Before the Capitol Riots

In the days and weeks following the US Capitol riots of 6 January 2021, journalists acknowledged the preparations made by far-right extremist groups within their online communities prior to the event – a disturbing number of which came from mainstream social media sites, where users can gather in unlimited quantities, communicate anonymously, and essentially hide in plain sight. This phenomenon is made evident by the behaviours of QAnon followers, who believe that a global Satanic cabal runs a secret child sex-trafficking ring which Donald Trump is meant to publicly expose in a hypothetical event referred to as ‘The Storm’. While Q – an anonymous message board user at the heart of the theory –   has been posting since late 2017, the movement grew in popularity over the course of the pandemic lockdowns of 2020. By early 2021, the mainstream media focused on QAnon as one of several far-right groups whose members took part in the Capitol riots. Therefore, comments on QAnon-promoting Instagram accounts provide meaningful insight into the preparations and coping mechanisms associated with one of the movement’s many broken promises: that if Trump did not win the 2020 US Presidential election, Mike Pence would overturn the election results to ensure Trump remained in office.

Although Instagram users have made clear contributions to the spread of misinformation, scholars agree that the platform has been essentially unacknowledged by academic researchers. Therefore, this pilot study aims to fill that gap. Using Festinger’s cognitive dissonance and failed prophecy theory as a guide, user engagement was analysed on posts from four different QAnon-promoting Instagram accounts during the week preceding 6 January 2021. Politically-charged posts and comment sections were archived from accounts that directly promoted QAnon-specific content, had at least ten-thousand followers, and were active throughout that week. At the time of data collection, follower counts were 15.7K for AccountA, 10K for AccountB, 11.5K for AccountC, and 41.7K for AccountD. Note that for the purposes of anonymity, account holder and commenter handles are hidden. Analysis of comments revealed four overarching themes: community, confirmation, preparation, and dissent.

Theme 1: Community
Social media offers a digital venue for like-minded people from around the world to gather, and this sense of community is
apparent in Instagram comments. For example, when AccountC shared a photo on 5 January 2021 about being en route to DC for the Trump rally, the following exchange occurred between a commenter and the account holder: 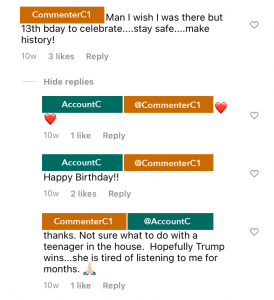 CommenterC1’s statement about their teenage daughter suggests that their political beliefs are not well-received at home, illustrating how Instagram may serve as an alternative support outlet when personal relationships prove insufficient. This also showcases CommenterC1’s persistent belief in a second presidential term for Trump, despite the fact that Biden had already been declared the winner at the time of this post. Many other comments in this category show similar exchanges, implying that maintaining a sense of community is of high value to those who follow far-right or QAnon-related Instagram accounts.

The next and most prominent theme found throughout the comment sections is confirmation, typically in the form of questions. Interestingly, a large number of these inquiries involved Mike Pence, who QAnon followers believed would overturn the election results to ensure a Trump win on 6 January 2021. In one case, users conversed on a post by AccountA regarding Pence’s alleged power in the election certification process, both exchanging new theories and seeking validation about their existing ones:

This demonstrates a common thread found throughout the confirmation category: a desire for information that alleviates uncertainty. Commenters wish to receive concrete affirmations about Pence’s actions and character, attempting to manage expectations in the event of an undesirable outcome. Again, these exchanges happen long after the announcement of Biden as the winner, so there are clear indications that the failed prophecy of another Trump presidency is being met with strategies to manage or move the goalpost.

As 6 January 2021 approached, comments that prepared followers for civil unrest increased in frequency. Many emphasised positivity, patriotism, and core group values by encouraging users to join forces in the fight: 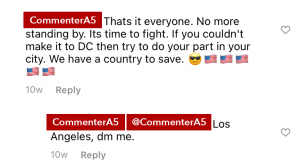 Note that CommenterA5 responds to their own comment inviting users in Los Angeles to get in touch personally – a meaningful example of how online interactions might be taken offline and yield real-world effects. For example, the precursor to QAnon known as Pizzagate led to a man entering a DC restaurant with an assault rifle to investigate the location’s alleged connection to a global sex-trafficking conspiracy. When compared to what preceded the Capitol riots, the order of operations is eerily similar: people receive misleading information online and subsequently act on it with violent intentions.

Dissenting comments were far less prevalent than supportive ones, but were still present enough to warrant further exploration. Some of these comments were simply ignored and unacknowledged. However, since most followers seemed to be ardent believers, comments that questioned the validity of the account holder’s claims often received critical responses. Yet while some opposition was met with mockery, believers also attempted to persuade those whose faith seemed to be faltering. On a post by AccountA regarding Lin Wood’s predictions of a Trump comeback, CommenterA6 was suspicious of Wood’s intentions:

Here, CommenterA6 may be considering abandoning the movement as they try to make sense of contradictory information, while CommenterA7 is attempting to maintain CommenterA6’s belief by encouraging further skepticism. One can see that even in the face of dissent, loyal followers use strategies to restore consonance for both themselves and their peers.

Research into potentially radicalising discourse on mainstream social media is critical to curbing the threat of violence that is often rooted in the convenience and anonymity of online communication. By observing the themes of community, confirmation, preparation, and dissent in the comment sections of QAnon-promoting Instagram accounts before the Capitol riots, one can see how users employed dissonance-reduction strategies to rebuild followers’ faith in the prediction that Trump would remain president. These findings suggest that Instagram is a popular meeting point for communities of conspiracy theorists to share updates, cope with dissonant information, and prepare for real-world events. Considering these findings, future researchers should utilise Instagram more frequently as a medium to study such phenomena.

Sara Aniano is currently a Communication graduate student at Monmouth University in West Long Branch, New Jersey. Her primary research interests include QAnon, far-right ideologies, medical misinformation, and extremism on social media. Particularly, she aims to highlight Instagram’s role in the spread of conspiracy theories and its contribution to harmful real-world events and violence. Sara graduated from Quinnipiac University in 2012 with a major in film production and a minor in graphic design, and has worked in design and marketing ever since. She currently works as a graphic production coordinator at Monmouth University.