How QAnon Reacts to Failed Predictions

The QAnon movement is no stranger to failed predictions. Despite making numerous predictions about everything from the return of John F Kennedy Jr. to an imminent civil war, very few, if any, of the predictions offered by the eponymous Q have come true. While the movement has never been good at forecasting future events, the past several weeks have been especially brutal.

Coming on the heels of the calamitous riot at the Capitol building in Washington DC, many followers of the QAnon movement pegged their hopes on a claim that President Trump would be inaugurated for a second term on 20 January 2021 — despite having lost the US Presidential Elections. In conjunction with the military, Trump was supposed to declare martial law and begin implementing ‘The Storm’ — an alleged plan to arrest senior Democratic leaders. When none of this materialised, many QAnon supporters pushed back their predictions of Trump’s re-inauguration to 4 March, the former Presidential Inauguration Day before the 20th Amendment was approved in 1933. Following the uneventful passage of this second date, some QAnon supporters moved the date for ‘The Storm’ yet again to 20 March 2021, which also failed to materialise.

One the most common responses of QAnon supporters to failed predictions has been to move back the date when the anticipated event will happen (see Figure 1 and Figure 2). By simply extending the timeline for completion, QAnon supporters can endlessly claim that the current situation is merely part of a larger plan that will take longer to manifest. In some cases, QAnon supporters will specify new a date but most often they will simply leave it open-ended, effectively making it harder for future prophecies to fall flat. 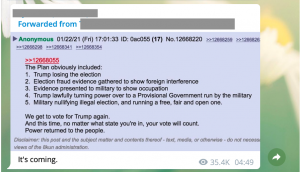 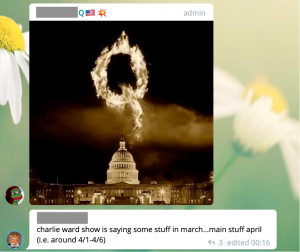 In a similar vein, QAnon supporters have also put the focus on partial victories to shift the attention away from their larger unrealised ambitions (see Figure 3). In a common refrain, QAnon supporters will claim that while the mass arrests and revolution that had been predicted never materialised, they did succeed in the more modest victory of raising awareness of their cause (‘The Great Awakening’). Instead of focusing on the fact that Trump was not reinaugurated in January as predicted, boosters claimed that the movement’s goal had actually been raising awareness and awakening others. For instance, one of the biggest QAnon channels on Telegram told supporters that “the bottom line is Q woke us all up to those paying attention. Q’s goal was to awaken us. The Great Awakening was hugely successful” (Figure 3). Often times previous claims of bigger victories were derided as being spread by detractors or rogue supporters, even when these predictions or calls for action had initially come from the most prominent channels and pages.

Another frequent method of coming to terms with failed predictions comes from spiritualisation of the narrative — usually expressed through claims that God’s plan to help the movement is beyond human comprehension. Indeed, QAnon supporters who became disappointed with the lack of human progress to implement ‘The Plan’ in the here-and-now, began to lean more heavily on their spiritual beliefs and their faith that God was in control of the movement since January. This has included sharing Christian scriptures, personal prayers, and even worship songs that encourage unity, resilience, and trust in God’s plan (see Figure 4). By emphasising that God is ultimately in control, this messaging helps shift responsibility away from human actors and towards a higher power who QAnon supporters believe is working to help the movement, albeit in mysterious ways. Spiritual appeals have also been used to keep supporters committed to the movement. In one post, a prominent QAnon influencer encouraged QAnon supporters not to be discouraged by the setbacks, but instead to remember that “God woke you up for a reason … you cannot go back to sleep when you have been awakened” (see Figure 5). In doing so, the author implies that if people ‘go back to sleep and turn away from QAnon’ they are not only abandoning the movement but also tacitly turning their back on God after they had been chosen. 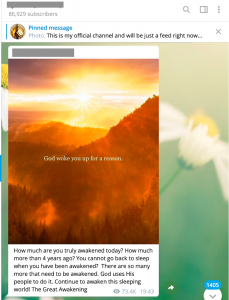 Messaging that emphasises belonging and unity, even in the face of defeat, is an important part of the adhesive which has kept the movement together in the wake of repeatedly inaccurate forecasting. Unsurprisingly, the narratives being pushed by QAnon influencers after January began to focus on comradery and belonging while looking back at what the movement had achieved rather than all of the predictions it had gotten wrong. On 22 January 2021, one prominent QAnon influencer began encouraging users to “[s]tick together and stop tearing each other apart. We have a much better chance of making it to the finish line that way” (see Figure 6). 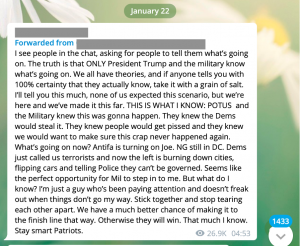 It is useful to analyse the reactions detailed above as mechanisms which have helped QAnon supporters come to terms with — and move beyond — the chronically inaccurate forecasting that characterises the movement. The responses of QAnon supporters also largely mirror the existing theories on how new religious movements and cults (NRM) respond to failures in prophecy but with some unique elements. On their own, none of these mechanisms is likely sufficient to repair the disappointment that supporters felt, but together they serve as a powerful antidote to failed predictions. This is not to say the movement hasn’t lost followers from its failed prognostications. While the movement appears to have kept most of its online supporters, these repeated failures of prophecy have proven too much for some members (see Figure 7 and Figure 8). But even amongst those QAnon influencers who stepped away, many of them have come back to the movement relatively quickly and resumed their previous levels of engagement.

Looking forward, the movement is likely to survive these failures in prophecy and continue recycling old conspiracy theories to fit new contexts. Perhaps the largest concern arising from these failed predictions is that QAnon supporters are beginning to feel led to take matters into their own hands after seeing that they cannot expect political or military leaders to implement their vision (see figure 9). In this case, the failed predictions of the past may well spur some QAnon supporters to take direct action and fuel a new, more dangerous, stage in the development of the movement. 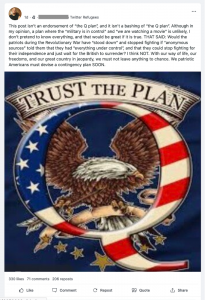