Mexican Cartel Use of Social Media

The use of social media by the Mexican cartels dates back approximately to the 2005-2006 era when the initial cartel offensive began and pushback from online vigilantes and hackers gradually emerged by 2010 or so. The online environment represented by social media use exists within the larger context of a continuing conflict in cyberspace—one in which the cartels are engaging with one another, cyber-vigilantes have become heavily involved, and the Mexican government is attempting to participate yet remains reactive and old media oriented in its participation. This environment via cyberspace (i.e., the digital realm) interacts with the physical one and witnesses synergistic dual dimensional overlays. It falls within LikeWar and similar Twitter and those related app influenced concepts of social media derived forms of non-state inspired warfare more recently identified. 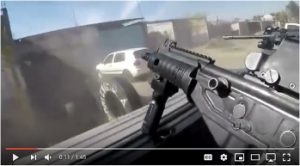 As with continued advancements in Internet connectivity, speed, and bandwidth, cartel social media use has evolved—as have the social media platforms and applications themselves—with a gradual shift away from simple text and still image postings from desk and laptops to online videos uploaded by smart phones. Given the specialty of this type of analysis,  few early works on it exist (as an example, see these from 2010 on gang and cartel social media use and cartel info ops) with scholars engaging in its long term tracking in the minority. Some of the trends and themes related to Mexican cartel social media postings and usage evident over the last decade or so are as follows:

Narcocultura promotion: Cartel culture is a ubiquitous and organic component of day-to-day life and found throughout all forms of its narco social media. It is very much like gang culture but more developed and with far more economic resources feeding its excesses with rural banditry archetypes, criminality, and even, at times, cult-like activities readily apparent. These influences are intertwined with regional traditions, Catholic practices, and a special relationship to the dead unique to Mexico. Concerns about acquiring materialistic things dominate given the subsistence and lower-social economic backgrounds of the majority of the cartel members. Narcocultura provides a means for the very poor in Mexican society to achieve great wealth and even fame if they have the cojones (balls) to do so. Different sub-cultural phases have existed, derived from the specific cartels and historical eras where they operated. These include ‘Sinaloa cowboys,’ ‘crew-cut Zeta commandos,’ ‘narco-polo wear,’ and ‘Knights Templars’ as a few examples. Unique narco perspectives on death further exist, as evidenced by the large monuments built at the Jardines Del Humaya cemetery outside of Culiacán, Sinaloa. 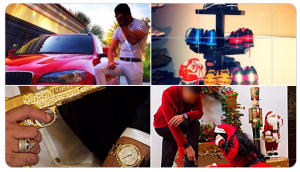 Machismo narratives dominate: The cartel lifestyle is hyper-masculine and violent in its behaviours and imagery with the Scarface archetype is constantly evident, and consequently promotes a skewed perspective on the role of women. Life is cheap with only the smartest and most brutal bosses and organisations surviving the narcotics trade and its related illicit activities. At the lower cartel levels, life is all about fast living and centered around owning flashy cars, obtaining expensive clothes and jewelry, going on alcohol and drug binges at clubs, and being with sexy young women. Such narratives and behaviours dominate cartel social media especially in individual member postings and on their media pages. Cartel members in the past have readily shied away from gay-linked and young urban professional-like social media applications and sites. Further, online challenges and signs of disrespect can result in blood in the streets. Images of beautiful women predominate in this media—even female guards and assassins must be good looking as a component of this narco fueled masculine fantasy. 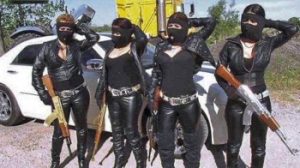 Commandos with lots of trucks, weapons, and enforcers: To portray the power of the various drug gangs and cartels, still posts and videos of their combat forces are constantly being uploaded to their social media accounts. Over time, the sophistication and even the size of some these cartel units has increased as they have gained greater combat capabilities. This evolutionary process is readily evident when elite Cartel Jalisco Nueva Generación (CJNG) units are considered. Over the last three years or so, imagery of these units has repeatedly been posted, with their members wearing better uniforms and tactical harnesses, carrying more sophisticated (and matching) weaponry, and riding in more imposing vehicles.

Cartel and commander branding: Social media branding is typically reserved for the leaders of cartels, special unit commanders, and plaza bosses. Such important cartel personages used to simply get corridos (folk songs) written about them, either as tributes to cultivate their favour or commissioned. Now, such branding extends to still images and videos posted online which includes their cartel logos, personal symbols (or designations), and accompanying ballads about them. The silhouette of ‘El Chapo’ Guzman—the former leader of the Cártel de Sinaloa (CDS)—is readily recognisable when posted online as are the logos of the major Mexican cartels. The capital letter ‘Z’ is immediately known to refer to the Los Zetas cartel, appearing in both graffiti and online postings. The more important members even have readily identifiable numbers (such as ‘Z-40’; Miguel Ángel Treviño) which they utilise in their online posts and threats. Sicarios (assassins) do not typically become social media stars, however, Broly Banderas of Los Caballeros Templarios (The Knights Templars) even became a sensation back in 2013 due to his good looks, charisma, and edgy bad boy selfies—in one photo he even had a bound victim in the back seat later found dead along the side of the road. 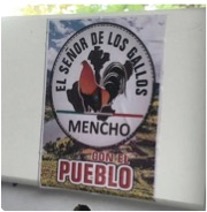 Low and high technology communication technique mashups: The cartels have engaged in ‘corpse messaging’ thousands of times between themselves and also aimed towards Mexican law enforcement, State security forces, and the general populace in order to intimidate and terrorise them. These messages, known as narcomantas, are typically handwritten on posters and bedsheets (or blankets) and then attached to cartel victims hung from bridge overpasses or set next to them after they have been dumped, both individually and in groups, in the street or on sidewalks. Images of cartel narcomantas and the victims they are associated with are then routinely uploaded to social media in order to spread the cartel’s message to much larger online public audiences.

The posting of brutal interrogations and torture killing videos: Instances of torture and beheadings, mostly secular but some also with dark spirituality and magico-religious elements, are part and parcel of cartel modus operandi to terrorise opposing groups and engage in psychological operations. These activities—especially brutal videotaped confessions (pried out by means of judicious use of physical violence)—are then posted to cartel social media accounts for wider dissemination. Over the years, such torture killing videos have increased in their barbarism and creativity with some of the victims dismembered onscreen, slowly garroted, and even subjected to a chainsaw attack or blown up by explosives tied to them as the cartels try to upstage one another. 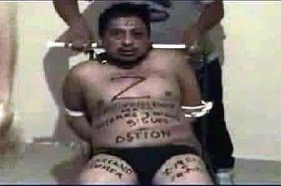 Street retribution against anti-narco bloggers and social media celebrities: In September 2011, Los Zetas respectively torture-killed and decapitated different ‘cyber-vigilante’ bloggers on the 13th and 24th of the month in sensationalised killings. Since that time, such bloggers have been targeted and killed with the imagery posted online by the cartels—sometimes even to their own blogger accounts as was the case in October 2014 with Maria del Rosario Fuentes Rubio and her Twitter account. In December 2017, the YouTube star “El Pirata De Culiacan” associated with the Sinaloa Cartel posted a video ‘talking shit’ about the head of the Cartel Jalisco Nueva Generación “El Mencho.” He was subsequently shot 18 times in a Guadalajara bar and killed in retribution for his vulgar insults against that dangerous cartel boss.

Social banditry archetypes promoted during disasters: Cartel leaders and plaza jefes (bosses) attempt to cultivate goodwill and influence among the local populaces under their control by providing hurricane, earthquake, and more recently COVID-19 pandemic aid. In November 2017, both Cártel del Golfo [CDG] and the Gente Nueva del Tigre y Carteles Unidos provided post-earthquake aid in southern Mexico and sought to capitalise on it via Facebook and other posts. Prior to that event, CDG and Los Zetas provided post Manuel and Ingrid hurricane relief in 2013 in Tamaulipas and publicised it via social media posts and banners and posters. By the middle of 2020, at least seven Mexican cartels engaged in providing COVID-19 aid (as well as in some cases engaging in quarantine enforcement) and publicised it in their social media posts.

Raw cartel versus cartel/government forces/and vigilante combat footage: Social media postings of cartel gun battles and tactical actions are now increasingly common in Mexico via video footage both with and without accompanying audio. Sometimes the footage contains the raw sounds of combat while at other times narcocorridors (folk ballads favoured by the cartels) are incorporated into them for dramatic effect. A short cell phone social media posting of cartel improvised armour fighting vehicles (IAFVs) taking part in an intense engagement recently took place in Doctor Coss, Nuevo Leon. The short video segment from 15 March 2021 of armoured warfare between the Cártel del Golfo (CDG) and the Cártel del Noreste (CDN) resulted in the destruction of five of the vehicles and the death of between 10-15 cartel enforcers. 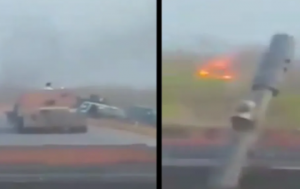 Limited first-person shooter (FPS) video use: In February 2019, the Cártel Santa Rosa de Lima (CSRL) engaged in the first FPS type cartel tactical action against a body shop operated by the Cartel Jalisco Nueva Generación (CJNG) in Valle de Santiago, Guanajuato state, Mexico. The shooter utilised a GoPro camera with the video and audio subsequently posted to CSRL social media to publicise the raid. No live-streaming of FPS videos has taken place by cartel enforcers or sicarios (assassins) as have occasionally taken place with Salafi-jihadi or white supremacist terrorists.

The emerging use of drone imagery in social media: Cartel drone use has gradually evolved from simply transporting narcotics over the Mexico-US Border to other applications including ISR (Intelligence, Surveillance, and Reconnaissance), weaponisation, and for propaganda purposes. Social media postings derived from videos taken by drone cameras have focused to date on humanitarian aid publicity—such as giving out provisions to villagers—and experimentation. The autodefensas (town defense forces) fighting the cartels are also beginning to utilise drones to post overflight video imagery online or in coordination with embedded reporters to publicise their dire situation. 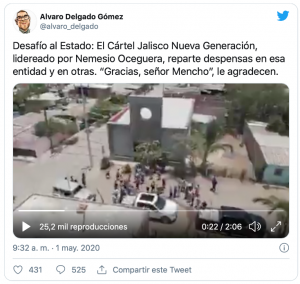 The expectation is that the Mexican cartels—as well as various street and prison gangs linked to them and also operating independently—will continue to increasingly utilise social media for recruitment, publicity, threat messaging, and propaganda purposes. However, their use of social media and orientation to it is in many ways very different than Al-Qaeda and Islamic State patterns of usage. The cartels are fragmented in their social media approaches and do not attempt to promote centralised narratives as do the former to achieve Salafist-jihadi strategic objectives. Instead, theirs is more operationally centered and illicit economy driven with social banditry, narcocultura, and gangster warlord narratives more dominant.

Dr. Robert J. Bunker is the director of research and analysis and a managing partner of C/O Futures, LLC. An international security and counterterrorism professional, he was Futurist in Residence at the Behavioral Science Unit (BSU) at the Federal Bureau of Investigation Academy in Quantico, VA, and Minerva Chair at the Strategic Studies Institute (SSI) of the U.S. Army War College, Carlisle, PA. He has delivered hundreds of presentations—including U.S. congressional testimony—with well over 500 publications across various fields and formats. He can be reached at [email protected], @DocBunker.