The Social Media Anatomy of New Radical Groups in Kashmir

By Kabir Taneja and Khalid Shah

In December 2020, a new militant group called the “United Liberation Front (ULF)” operating in Jammu & Kashmir made its first appearance on the online platform, Telegram. Prior to this, there was no mention of this group or its on-ground activities in the mainstream militant narratives or in the media. The Telegram channel of this outfit was created on 21 December, and on the next day, a poster appeared on the channel which read: “United Media Front for all the outfits fighting against the Indian occupational regime for the liberation [sic] of Kashmir.” 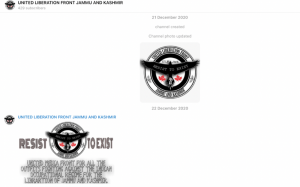 The poster made it evident that the group was a common propaganda platform for various militant outfits operating in Kashmir, an aggregator, if you will. Soon after its creation, it started sharing information about attacks and recruitment conducted by others such as The Resistance Front (TRF), Peoples’ Anti Fascist Front (PAFF), and so on. The main outlier here was that the legacy militant groups were not covered as much, but the alternatives were. The name of this group and its abbreviation had a resonance of Kashmir’s first militant outfit, the Jammu Kashmir Liberation Front. While the Jammu and Kashmir Liberation Front was popularly known as JKLF or KLF, which reportedly disbanded its militant wing in 1994, the new outfit brands itself in a similar branding fashion as the ULF, arguably giving it some historical heft.

The group’s iconography avoids any religious symbols and identifiers—a recurring feature in militant propaganda, particularly of the new groups such as TRF and PAFF. This marks a tactical shift in branding of the militant outfits to the outside world. There has been an increased effort to secularise the propaganda of the outfits with emphasis on “resistance” instead of jihad or a holy war sanctified by Islam. The ULF uses “Resist to Exist” as its slogan. The logo of this group uses a Chinar leaf to give it a Kashmiri identity. Apart from that, the logo uses sketches of a clenched fist and a falcon. Older groups such as the Lashkar-e-Taiba, Hizbul Mujahideen, and Jaish-e-Muhammad always borrowed religious iconography in their logos, flags, and slogans.

There is a remarkable change in the kind of content these militant outfits release. Any militancy-related activity finds a mention on these groups. The tone and tenor of the messages are victorious and boastful in the case of successful attacks on security forces, and even more so if security forces suffer causalities. Often the groups claim a higher number of causalities to the official security forces figures to highlight the capacity of causing damage. The security forces are referred to as “occupational forces” and the government is called “occupational regime”. Occupation, resistance, and freedom struggle are the recurring catchphrases around which much of the content revolves. The members of militant outfits are called “freedom fighters”, irrespective of which group they are associated with.

After every successful encounter against the security forces, the admins of the group pay tribute to the fallen militants. As is common in militant groups across the world, the dead militants are hailed as martyrs. For instance, on 26 December, when two local militants reportedly belonging to Al-Badr group were killed by the security forces in Shopian area of Kashmir, a statement was issued in both text and image formats eulogising the militants.

This group posts audio and statements announcing the recruitment of new members to militant groups. The recruitment announcement is often accompanied by an audio clip of the recruit. In the past, posting pictures of a new member of the outfit with a weapon was the norm; however, this has changed. Militant organisations prefer to keep the identity of the recruits anonymous. The popularity of a recruit helps him in making on-ground connections with locals—usually via networks of family and friends— this comes as a severe disadvantage for the militant outfits. The possibility of being recognised by police or army informers increases manifold and makes the generation of human intelligence (HUMINT) quite easy for the security forces. Often militant sightings are used to study their pattern of movements; to identify their hideouts and known associates. This is why the propaganda channels of the outfits have chosen anonymity over the popularity of a militant, the former being allowed fairly easily via online channels.

Much of the content is posted in the form of images with short and crisp messaging. The restrictions on high-speed internet could be a significant reason why a text and an image format is preferred, as the circulation of these formats becomes easier on curtailed 2G internet speed which ranges from 260-360 Kbps. The video content in comparison of these groups is usually lesser in frequency. However, it is important to note that the production quality of videos put out by the groups is quite professional, following the trends set by other larger groups such as Islamic State (IS), Al-Qaeda, Hay’at Tahrir al-Sham (HTS) in Syria, and so on. Videos are circulated to generate impact and thus are quite selective in terms of the content being put out.

It is evident from the Telegram channels of the militant outfits that the content generation, messaging, and the narrative building is now more centralised than in the past. The propaganda material is published on channels with anonymous administrators and very rarely do recruits put out content through their personal sources. The centralisation of propaganda is to enforce discipline among the cadre and to avoid digressions from the central agenda of a militant outfit. Earlier, the narrative building of these groups was chaotic as individual members would often put out videos and images on social media which sometimes would identify their hideouts, movements’ tracks, and other members of the group.

Although Telegram is seemingly the most favoured platform of these militant groups, there is enough evidence to suggest that they are moving to newer, often smaller and more obscure platforms for circulation of their content. This is primarily done to find a way around aggressive de-platforming of terrorist content done by major tech companies, including Telegram. For instance, after channels of TRF and PAFF were removed by Telegram, they shifted to a lesser-known messaging platform called Nandbox. Hyperlinks to Nandbox channels were circulated in chat groups linked to militant organisations.

Other than the above-mentioned tactics, militant outfits frequently rebrand their groups by creating a facade of launching a new group. Over the past few months, there has been a surge of new outfits launched. Ostensibly, much of these organisations exist only on social media, which highlights an interesting gap between the online and offline tactics working in concert with each other. The creation of the ULF is a point in case. Other outfits names such as Kashmir Tigers, Lashkar-e-Mustafa, Ghaznavi Force, Kashmir Liberation Warriors, and Tehreek-i-Millat-i-Islami have surfaced on social media platforms. Once a legal request to remove or debar a militant outfit is received by the tech companies, they remove fresh channels and groups of the known militant groups with increased efficacy. That is why the militant groups seek to rebrand their activities under a new, often translucent banner as another tactic to circumvent de-platforming.

The ever-evolving militancy ecosystem in Kashmir can also place itself at the forefront of an important question for tech platforms, i.e. do tactics of de-platforming and understanding of harmful content be decluttered even further under the umbrellas of counterterrorism (CT) and counterinsurgency (COIN), the latter being a much more difficult and longer game with cooperation with the state, needing more institutional heft from both sides? If CT and COIN have different offline valuations in strategy, the same discrepancies and opportunities alike could be explored in the online sphere as well. Of course, this has its own set of challenges—to begin with, a disagreement within the security architectures of India on whether CT or COIN strategies prevail in Kashmir. Nonetheless, the Kashmiri theatre showcases itself as an increasingly valuable example for tech platforms and state cyber security institutions alike on the challenges of online extremist content, and how to deal with the same in more narrowed down conflicts and geographical theatres.