The climate and ecological crisis was one of the dominating issues in 2019. Boosted by the visible environmental and ecological consequences of global lockdowns in spring of this year, the question of climate change continues to occupy an important place on the international political and public agenda. Creating schisms in society along age groups and political orientation, radical actors use the growing discordance to hijack the debate on countering climate change by injecting their nativist and racist ideas. In particular, the extreme-right ideology of eco-fascism gained notoriety, when the perpetrator of the Christchurch terrorist attack (15 March 2019) referred to himself as an eco-fascist, and the gunman of the El Paso attack (3 August 2019) reasoned his killings with eco-fascist ideas.

Eco-fascists blame the overpopulation of the global south for emissions and resource scarcity leading to environmental degradation. They see migration as proof of the “great replacement” of the “white race” and as responsible for environmental damage in the West. In parallel, eco-fascists blame the consumerism of the West for the current climate and ecological crisis, pushed through the capitalist system created by Jewish elites. Gaining popularity over the course of the last two years, eco-fascism originates in the ideas of 19th and 20th century thinkers, such as Ernst Haeckel and Madison Grant, and is deeply rooted in Nazi ideology. The national socialist notion of ‘Blut und Boden’ (blood and soil) claims a connection between racial identity and the respective land. It stipulates that race determines the ideal area of settlement, which needs to be kept pure, without alien and undesirable elements.

In the aftermath of the 2019 attacks and with the onset of the global COVID-19 crisis, mainstream social media saw a rise of memes promoting eco-fascist ideas. This included the narrative depicting the virus as the cure to human overpopulation and destruction of the planet. The re-emergence of eco-fascism, in the context of omnipresent debates on the climate and ecological crisis, showing disruptive tendencies across societies, is no coincidence. For several reasons, it should be treated as a worrisome and emerging threat.

Firstly, in light of drastic environmental and ecological consequences, it is likely that factions of the non-violent far-right will stop denying climate change and instead use it as an emotive argument against migration and “non-whites”. Thereby, non-violent actors offer a stage to eco-fascist ideology by blaming migration and overpopulation of the global south as oversimplified answers to a complex phenomenon. Adopting this environmental cape allows for the spread of masked far-right ideology and is used to broaden the field of voters and potential recruits. Violent actors alike disguise racist and nativist ideas behind environmental concerns to lure in young people and environmental activists to their violent extreme-right ideology. Spreading hashtags on Twitter, such as #treesnotrefugees and #MakeEcologyDeepAgain, #EFDS (Eco-Fascist Death Squads – referring to violent solutions against overpopulation) or slogans like “Love Nature, Kill Non-Whites” and “Save Bees, Plant Trees, Shoot Refugees” show the brutal underpinning of the movement. Non-violent actors promoting the ideas of eco-fascism might act as a gateway to more violent parts of the movement. 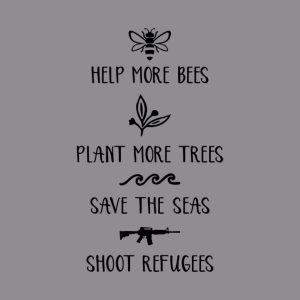 This leads to the second concern: far-right extremists abuse the legitimate sense of urgency created by mostly non-violent environmentalists to justify violence. In addition to the two fatal shootings of 2019, the now-defunct group, The Green Brigade, committed an arson attack on a mink farm in Sweden in January 2020. While not having an inherent Nazi-ideology, the eco-terrorist group, Individualistsas Tendiendo A Lo Salvaje/Individualists Tending toward the Savage [ITS], welcomed the fascist terror attacks and praised the Christchurch killing. ITS is responsible for targeted mail bombings and bombings in public spaces. Since 2011, they have committed 29 attacks, the majority taking place at accelerating pace since 2016, across Latin and North America, as well as Europe. Using the narrative of imminent environmental extinction to promote violent acts and creating an apocalyptic atmosphere also leads to eco-fascists closing ranks with accelerationist factions of the extreme-right. The two now-defunct terrorist organisations, Atomwaffen Division (AWD) and National Action, for instance, referenced eco-fascists ideas in their activism, including organised hikes to reconnect with the land. Scottish Dawn, consisting of several former members of National Action, used “Blood and Soil” as its primary slogan. Despite eco-fascism being a fringe movement and most of its members remaining ‘online warriors’ creating propaganda items, the described actions underline the violent potential of eco-fascism.

Thirdly, the threat of eco-fascism has a global dimension. Beyond the cells of ITS in Latin America, North America and Europe, the Eastern European network, Greenline Front, had satellites in Argentina, Belarus, Russia, Serbia, Switzerland and four European states. The Green Brigade had claimed to have members in the US, the United Kingdom and Sweden, while also being in close interaction with members from the US-American AWD and European Misanthropic Division.

In addition to these trans-national groups, lone wolf perpetrators also show global connections.  make references to other eco-fascists around the globe. The Christchurch perpetrator for instance said to be inspired by the eco-fascist ideas of Norwegian terrorist Andres Breivik. The motivations behind the Christchurch massacre in turn inspired the US-shooter of El-Paso. This underlines the need for security services and political actors to treat eco-fascism as a global threat.

Countering the extreme-right’s efforts to hijack and distort the debate around the climate and ecological crisis is a challenge we will have to face, on the one hand, to prevent aggravating rifts in societies and a growing extremist potential and, on the other hand, to find much needed solutions to protect our environment. This is increasingly important considering the convergence of pending aggravating natural disasters and adverse social consequences and the efforts of the far-right to hijack and distort the debate. This convergence is the ideal breeding ground for eco-fascism and has created the potential for violence. Despite eco-fascism not representing the main threat within the extreme-right for the time being, it should not be overlooked due to its disruptive and violent tendencies, as well as future relevance.