Islamic State (IS) was perhaps the first jihadist group to produce video formats in a (quasi-)professional fashion: especially during the so-called Caliphate days it published genre series, for example on hisba police, with a professional look and feel. The use of series is, at least in part, due to the use of formats which offers several advantages to producers. Formats, in film-scholarly understanding, are repeating forms that organise a film or video at its structural level. It does not necessarily interfere with film’s “invisible means of communication” (e.g. use of image equators, mise-en-scène) but allows producers to pre-plan the organisation of footage and auditive material in post-production – this is especially effective when taking into account that professional film makers (outside Islamic State) will often lament that one can make a film one time or three times: you can make it once through good planning or you can make it three times, if you re-invent your film in pre-production, again in production, and then again in post-production. Post-production is thus streamlined through formats and becomes less of a time and cost factor.

The format structure that Islamic State is using has developed and repeated since the early days of Islamic State film production – and it has over time been formalised as its use over the years shows. A formal structure allows video producers to make video production ergonomic, meaning once the structure is decided upon, a pragmatic frame for video post-production is set. While the decision saves time and effort, viewers are, in return, being accustomed to perceptive patterns that facilitate understanding of the structured topical programme because the structure through which information is dispensed remains generally the same. Another positive effect for Islamic State media workers that can be assumed is that some of the video structures are easily communicated among IS video makers as templates. In practice, this should mean that small amounts of data are exported into a video editor, and production teams need only fill contingent structure slots with new footage. This may also explain the promptness with which a template for video production may appear in videos from Islamic State territories that are generally remote from its core regions (e.g. the now defunct Wilayat Philippines).

The consistently used slots of IS video syntax are:

Formally designed as a white calligraphy on an opaque background, displayed with soft dissolves at its in and out, the basmala appears as a 5 second spot at the head of virtually every Islamic State video. The verse reads “bismi ʾllāhi ʾr-rahmāni ʾr-rahīm”, which translates (roughly) to “In the name of Allah, the Most Gracious, the Most Merciful”. Rhetorically, speaking in the name of someone or even a deity means speaking in their stead. Thus, the producers do not hide their attempt to use the phrase in parallelism to the suras in the Qur’an, which begin with the same verse: the basmala in IS videos is an attempt to charge their video with religious authority. 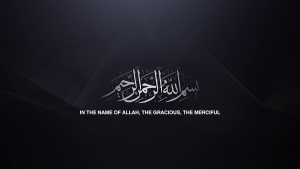 The identifier which Islamic State uses currently is a co-branded animated spot that, since 2016, integrates with the basmala. The spot foregrounds Islamic State’s official video brand logo (a square kufi) which then, in a rotation animation (or possibly a width-extension animation with two intercutting logos, technically speaking), turns over to the identifier of the regional producer. Note the circular design of the regional producer’s calligraphy which seems to formally emulate the seal of the Prophet Muhammad. Note further the artificial animation of light, which connotes divine presence even within IS’s official branding. The current design has been used consistently since mid-December of 2016, when military opposition to Islamic State had increased significantly and the media wing’s responsibility to support and strengthen IS’s state-building project grew, yet again. 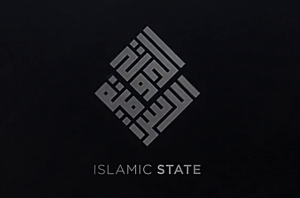 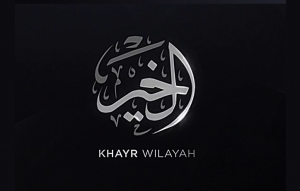 A staple of Islamic State video production, the title sequence commonly consists of 1. a montage of attractions, that in rapid edits shows kinetically and auditorily attracting material to arouse attention (effectively a tactic of viewer activation) and 2. animated title graphics, sometimes calligraphic, with various visual FX applied to them (which further drive the field of connotations commanded by the title or title phrase). Commonly, the titles of Islamic State videos are “on loan” from the Qur’an as direct citations. These title phrases open up a topical frame for the following segments but also offer a frame of interpretation for the following segments. 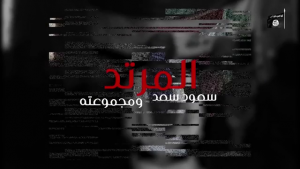 Capital punishment videos tend to use colour desaturation, image depreciation, data-moshing, and RGB split effects, effectively appropriating the aesthetics of spy-vs-spy genre films (screenshot taken from But if you return to sin 3)

Topical segments find their bearings in the video title and the genre to which the respective video belongs. Here, the ideological frame provided by the video title is formalised through current footage that serves to illustrate and demonstrate. Effectively, this strategy continues the parallelism to the Qur’an as the video producers’ preferred rhetorical form as it allows them to “update” doctrine through current events. But the topical episode also falls into the domain of the “invisible techniques of film” that are at play. Especially during the days of the so-called Caliphate did Islamic State have at its disposal a stock of stereotypical genres (e.g. capital punishment, hisbah) that followed their own rules of cinematography (or perhaps better: videography), editing, mise-en-scène and use of sound and music.

The intertitle appears commonly between topical episodes and it functions as a junctional feature. In radio and TV it is typically called “bumper” and it represents itself as a station identifier, a jingle, or as an announcement for a series of advertisements. In Islamic State videos, it is formally oriented in the title sequence’s design and occurs between topical episodes (if there are several episodes). As a connector it appears to serve two different functions, depending on which genre it is used in: if it is used in a topically homogenous video such as the sniper video series Shoot to Redeem Yourself, it separates segments which are nonetheless generally related and leads into the next. If it is used in a journal format such as the Inside the Khilafah series, it can serve as a topical junction between episodes that are not strictly topically related (e.g. martyrdom and ribat) and may also appear in different designs. In both cases the intertitle’s function is nonetheless to refresh the topical frame proposed by the title sequence – structurally speaking, the title sequence thus governs the video’s topical framing.

The short-lived Shoot to Redeem Yourself series uses sped-up footage of vamping snipers as intertitles; interestingly, it is one of the few videos to not show the video title over its footage

It is uncommon for videos by the Islamic State to use a credit sequence. The investment it makes into the design (and sometimes, frankly: the bombast) of its title sequence is missing almost completely from its end titles. Neither, the title sequence nor the credits, state any of the producers’ names which may be due to several reasons. The most obvious of these seems to be the protection of their media workers’ identities who have historically been targets of the military coalitions against Islamic State. It could be speculated from the vantage point of image theory that another reason for omitting producer names is that possibly the producers do not want to run the risk of creating “media idols”, but this hypothesis might stand on shaky legs as Islamic State has occasionally used identifiable personnel on camera. The latter notwithstanding, the credits of IS videos commonly consist of a text overlay in the bottom right corner which states the producing Wilayat (“region” or “media office specific to an IS-held territory”) and the year and month of production according to the Hijri calendar.

A typical credit design for an Islamic State video: cornerstone data in the bottom right of the image; in officially translated versions the name of the translating office may appear along with subtitles superimposed