Radicalisation, jihadism and terrorism-related issues were not extensively addressed during the 2020 US presidential campaign. In contrast to all previous elections since the beginning of the 21st century, these topics, along with US involvement in military conflicts in the Middle East did not play a central role in the debate between the two candidates. As president-elect Joe Biden will take office in January 2021, almost two decades after the 9/11 attacks, the fight against jihadism seems to fade away as a top priority for both the Democrat and Republican parties in Washington, D.C.

In the 2004 presidential election, the confrontation between George W. Bush and John Kerry was shaped by the response to 9/11 and the consequence of the so-called war on terror that led to two military interventions in Afghanistan (2001) and Iraq (2003).

In 2008, Barack Obama first distinguished himself from Hillary Clinton in the race for the Democratic Party Primary by taking a clear stance on the conflict in Iraq, depicted as a ‘dumb war’, and by campaigning for the closure of Guantanamo detention camp in Cuba. Within the GOP, John McCain insisted on increasing the US involvement in the Middle East to defeat terrorism, proposing during one Town Hall meeting to maintain military troops in Iraq for a ‘hundred years’. Other issues were debated by both parties such as the use of waterboarding as a torture technic or favouring a legal or an extrajudicial frame to confront a ‘non-conventional enemy’.

In 2012, Barack Obama benefited from the elimination of America’s Most Wanted man and al-Qaeda leader, Osama bin Laden on 2 May 2011 in Abbottabad, Pakistan. This offered tremendous publicity to the Commander-in-Chief running for re-election.

Finally, the 2016 elections were marked by strong polarisation between Hillary Clinton and Donald Trump on all major topics, international and security concerns included. The Republican candidate hammered his will to ‘bring the troops back home’ blaming his opponent for her purported support to ‘forever wars’ and weakness in responding to the Islamic State (IS) surge in Northern Syria and Iraq.

Thus, one could have expected the 2020 campaign to fit into a similar pattern, especially considering that IS was militarily defeated, having lost its control over Mosul and Raqqa in 2017, meanwhile its leader Abu Bakr al-Baghdadi was killed on 27 October 2019. However, jihadism, the crisis in the Middle East and recent attacks in Europe did not play a decisive role in the ballots. These matters were not particularly publicised in political ads nor addressed as a defining line between both candidates during TV debates. Overall, analysts tend to agree on the importance of domestic affairs, the handling of the COVID-19 pandemic and repeated concern about Trump’s divisive personality as POTUS to explain the designation of Joe Biden as President-Elect.

In order to objectify these hypotheses, and the level of concern in the United States for these issues over time, we analysed data from Google trends, collected with ‘R package’ or ‘gtrendsR’. The exploitation syntax is annexed to the present document.

We examined the frequency of twenty-six keywords referring to both general or specific news contents or concerns with regard to Islamist extremism in US Google searches between January 2004 to October 2020 (the longest period available).

In doing so, we looked at:

4) and a few other words associated with the war on terror such as ‘IED’, ‘Guantanamo’, ‘waterboarding’ and ‘drone strike’.

For each subgroup, we calculated the search volume, built up a timeline and then gathered all values and applied a multivariate analysis using UMAP (Manifold Learning) method.

As the graphs below show, the descriptive trends are fairly informative. Some keywords have seen increasing interest and others declining use over the past 16 years.

Relying on monthly data, we can track subtle and short-term changes. In the long run, some terms have received a steady increase of interest over time, such as ‘jihad’, ‘hihjrah’, ‘islamophobia’ and ‘secularism’. On the contrary, searches related to ‘al-Qaeda’ have noticed a sharp decline since the mid-2000s, and almost disappeared after Osama bin Laden’s death in May 2011. It is noteworthy that al-Qaeda affiliates, such as AQIM, are following the same pattern.

Another important finding is that neither IS nor Abu Bakr Al Baghdadi’s death had any long-lasting effect on the level of concern for American Google users. Requests are characterised by peaks of attention around some breaking-news events, such as the dramatic beheading of Steven Sotloff and James Foley in August and September 2014, or the horrific immolation of the Jordanian Air Force pilot Muath Al-Kasasbeh in January 2015, which was broadcast on Fox news website, among others.

In a nutshell, American users have expressed a deep interest for jihadi organisations, leaders and activities post-9/11. Yet, this decreased rapidly over the course of George W. Bush’s second term and became a remote concern under Obama’s presidency, eight years before Donald Trump’s election at the White House. Jihadi-related issues started to fade away as a top priority concern for US citizens as early as the late 2000s, well before the rise and fall of IS’s so-called ‘caliphate’. It came at a time when al-Qaeda’s offspring in Iraq, the so-called Islamic State of Iraq (which will later become IS), began its decline. Its leaders, such as Abu Musab Al Zarqawi, were killed after having given birth to an organisation with distinct political and theological features that was able to attract numerous officers of the former Baathist army (including Abu Ibrahim, IS’s current leader). By the turn of the 2010 decade, requests relating to the US ‘response’ such as the ‘droning’ of terrorists, including American citizens who joined these organisations overseas such as Anwar al-Awlaki, decreased. The same is true for the debate around Guantanamo and the penal frame to answer terrorism, even if the trial of Khalid Sheikh Mohammad, the “mastermind” behind the 9/11 attack is due to take place in January 2021.

We have seen in a previous article that this stands in sharp contrast with the perception of the same issues for French Google users. On their side, they were first showing little interest in global jihad as long as it was perceived as a distant threat, related to the US invasion of Iraq to which the French government has been opposed. This has changed with the development of IS and the involvement of hundreds of French citizens in jihadist organisations from 2012 onwards. It only increased with the latest developments and debates in France around recent attacks, freedom of expression, laicité and Islamism.

In conclusion, the fight against jihadism and terrorism, which has long been a key topic in American politics and a defining line in international policy orientations has lost its predominance in the public opinion and the media attention it used to receive. This could come as a surprise since jihadist activities have increased tremendously in the US and traditional regions of influence, such as the Middle East and Europe. One way of explaining this trend is to mention a change in the perception of the threat (from a direct to a distant one) and a certain fatigue with regard to its policy implications. Another way would be to point out that Americans may wrongly assume that al-Qaeda, IS and more broadly jihadism, are solved problems since iconic leaders have been killed and no charismatic figures have since embodied the renewal of these movements. This trend, which appears to be opposed to that followed on the old continent, could potentially be widening a gap between Europe and the United States in terms of the policy-making and threat definition.

Below are the different timelines showing the frequency of each term in US Google requests over the course of the last sixteen years. 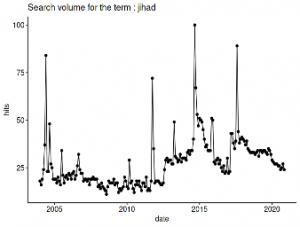 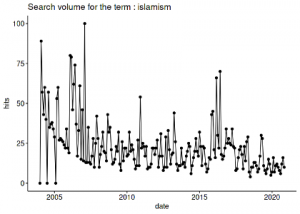 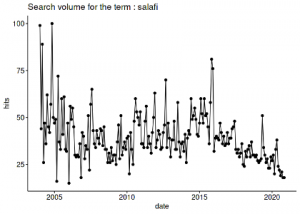 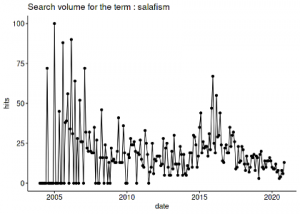 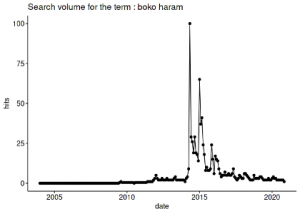 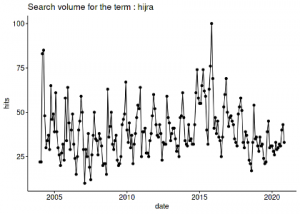 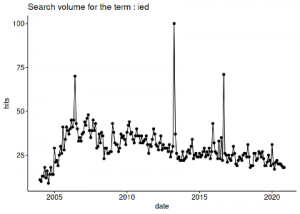 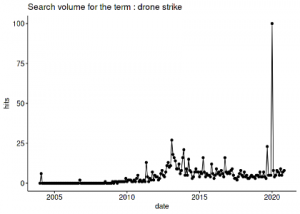 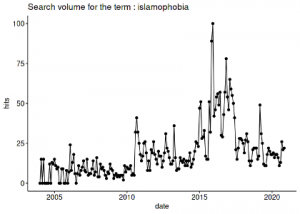 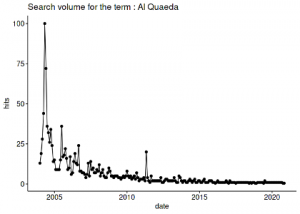 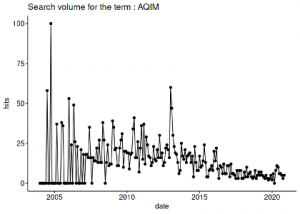 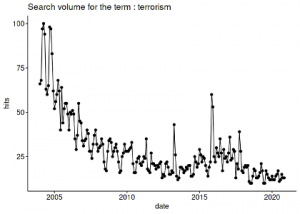 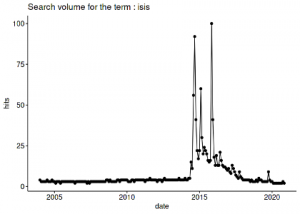 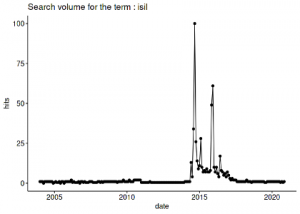 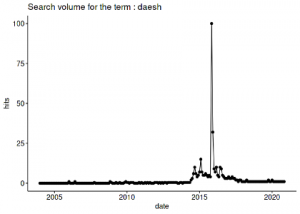 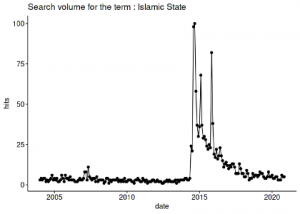 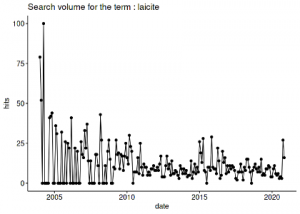 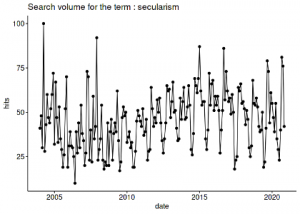 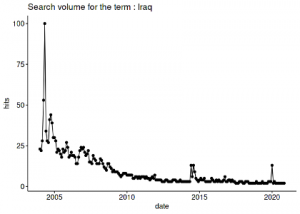 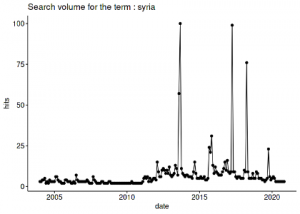 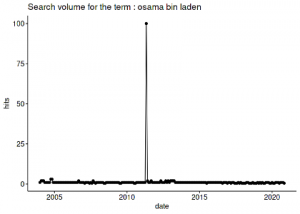 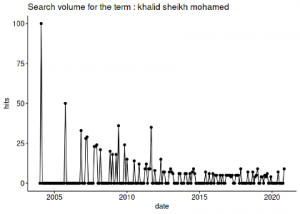 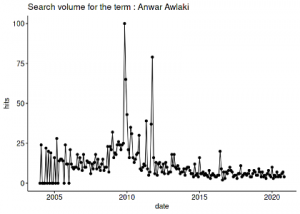 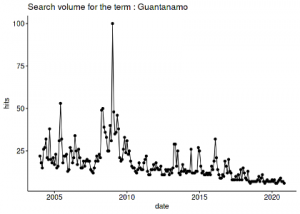 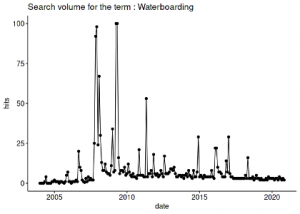 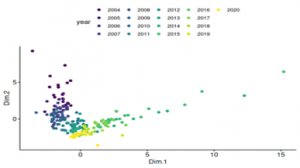 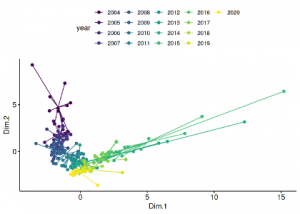