Sitting down with Medyan Dairieh, a journalist who has personally travelled to  Islamic State in 2014, has so far been one of the highlights of my career as a media researcher. Not only was Medyan kind enough to recount his experiences, he also made sure to answer each of my questions with great care. As he later told me, he answered my questions hoping not only to pass on his knowledge but also to revive his belief in citation. For a journalist who had been cut off by TV hosts and had subsequently stopped giving public interviews, I suppose there is much healing to be done – perhaps especially for a well-travelled man like him.

Following his approval, I was able to delve into Islamic State’s internal media dissemination in part 1 of this series. Medyan answered some questions about the media production sites he witnessed during his visit to Islamic State in 2014, which was around the time Islamic State declared the Sykes-Picot Agreement null and void in The End of Sykes-Picot (al-Hayat Media Center, 29 June 2014).

Continuing with my studies on the film of Islamic State, an endeavour that should soon come to fruition in the form of my PhD thesis, I will now reveal five more questions with Medyan Dairieh – this time on media technology and centres. For reference, links to the Zelin corpus (http://jihadology.net) are provided throughout this article.

Yes, I was often with them at al-Furqan Media [Foundation]. They did several things such as going to the streets interviewing people, filming various activities and public events. For instance, they would film the open markets at Ramadan. They would film all the public events taking place in the Islamic State territory. They would publish some of the videos on YouTube. The West was convinced that the Islamic State had a very advanced media apparatus. Yet, from what I saw when I was in Raqqa, I felt that the Islamic State’s media work was very weak from a technical point of view, and those undertaking it clearly lacked in experience. They had professional equipment though, which they had brought from Mosul.

Were members of Islamic State interested in the equipment you used?

I went to Raqqa with a small Canon XA10 video camera and a Canon 5D III. I also had a helmet and body armour. But no, they had better equipment than what I was carrying.

The cameramen and editors of IS videos often seemed conscious of not putting too much emphasis on their equipment. Still, some of their equipment can be witnessed through vigilant study, such as in this video, titled My Son Preceded Me (Wilayat Halab, 19 February 2016), where a Canon model of journalistic quality (i.e. in the four-digit price range at the time) can be spotted briefly. Judging by the camera’s body, it is likely an EOS 5DS or an EOS 7D Mark II.

Did you come in touch with any of Islamic State’s other media offices that were budding at the time, besides al-Furqan Media Foundation? Such as al-Hayat Media Center, al-I’tisam Media Foundation, Mu’assassatu Ajnad, or Amaq News Agency?

I only saw al-Hayat Media Center one evening at al-Shaddada near the border of Syria with Iraq, on my way to Iraq. In Raqqa, I was in touch with al-Furqan Media Foundation. Those working in al-Furqan didn’t seem to have proper training. A Saudi guy working in there had previous experience in Saudi Arabia working in a kitchen. A guy from Austria at al-Furqan was working in filming and maybe even in audio media, I can’t remember exactly. Media workers didn’t seem to have much experience. But you must keep in mind that when I was there the Islamic State was in its inception – it was a few days old- and media personnel were just at the beginning. It cannot be ruled out that with time the skills and work quality in their media offices improved. 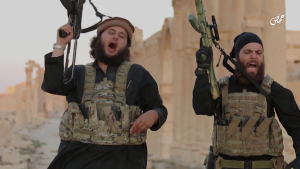 The man from Austria that Medyan is referring to was Abu Usama al-Gharib, seen in this screenshot on the left in the German-language production Der Tourismus dieser Ummah (“The Tourism of this Ummah”, Wilayat Hims, 5 August 2015) moments after executing a hostage. Born Mohammed Mahmoud, al-Gharib had already been under surveillance by German authorities for his radical views and media work before his emigration in 2012 (which came as part of the emigration of the entire Millatu Ibrahim group to which Denis Cuspert also belonged).

Were the media you recorded collected and censored before you were allowed to keep them? (Recent research has suggested that while there have not been any external camera teams in Islamic State in recent years, Islamic State had installed strong security checks for its own recorded material.)

They looked at my footage to make sure that Abu Mohammad al-Adnani would not appear in any footage for security reasons. They also looked at the footage to make sure that the face of a Saudi member of the Islamic State was not appearing in the video, also for security reasons. Moreover, I had filmed women receiving zakat, and they requested me to delete these clips on the basis that they are women and they did not want women to appear in videos.

Did you, by any chance, meet or learn about John Cantlie or any other members of his group of prisoners?

I never met them and never discussed them with members of the Islamic State.

Again, I would like to thank Medyan Dairieh for the interview and his kind permission to publish his answers. He is on Twitter using the handle @MedyanDairieh.