It seemed unlikely to get in touch with Medyan Dairieh, a man who has stopped giving interviews. To add to this challenge, contacting him during the onset of the Coronavirus crisis was an additional hurdle, but fortunately I was able to conduct an interview with him during the spring of 2020 as part of my PhD research on the Islamic State’s film. Those not familiar with his name may remember the VICE documentary The Islamic State (2014) for which he not only personally travelled to the so-called Islamic State Caliphate during its founding period in 2014, but also won the George Foster Peabody Award. Medyan was kind enough to recall and share his experiences through a series of questions he allowed me to ask as part of a strictly scientific interview. Originally, these notes were confidential, but after much deliberation and the approval of my interviewee, I can now share some of the answers I was kindly provided.

In the first part of this short series I will reproduce parts of the Q&A between Medyan Dairieh and myself with a particular focus on Islamic State’s media work in the so-called Caliphate, particularly the “media booths” or “media kiosks” that were part of Islamic State’s internal media dissemination structure. Before reading the interview below, please bear in mind that the answers given reflect the technological development of Islamic State at a certain point in time (specifically the summer of 2014). However, some of the answers I was provided outline a slightly broader image of Islamic State’s “film theatres”. One principal conclusion I will state in advance is that the images of “media booths” in Islamic State’s own official media, seem largely reliable: media workers set up the booths, crowds gathered to watch, to obtain media products, and perhaps even to be interviewed.

The rest I will leave for you to discover in Medyan Dairieh’s own words. For reference, links to media from the Zelin Corpus (http://jihadology.net) are provided.

In a 2014 interview with mtv Lebanon you mentioned that the Caliphate needs media and has realized the need for advanced media (the interview I am referring to can be seen here). Sadly, the interviewer changed the topic before you could answer. Do you, by any chance, remember what you meant when you said that the Islamic State “needs media and realizes a need for advanced media”?

At first Daesh was an organisation. After they turned into the Islamic State, they needed an advanced media apparatus due to their new and more complex dimension. After all, any country needs a press, and possibly an organised and advanced one. […] In many interviews it has often happened that as I start to answer a question and interviewers don’t want to hear what I am saying, they cut me off with a new question. That’s the reason I soon gave up giving interviews. 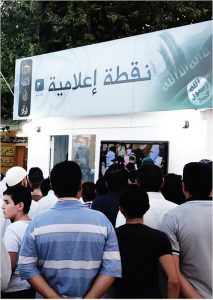 Yes, there were kiosks which held public video screenings organised by media workers. But they also gave out DVDs/CDs of Daesh battles, of speeches of Abu Bakr Al-Baghdadi and Mohammad Al-Adnani, and of religion lessons. They also gave out pamphlets and small books of religious issues such as Islam and Sharia. Media personnel would produce the DVDs/CDs and USB sticks with speeches of Abu Bakr Al-Baghdadi and of Mohammad al-Adnani, with recorded military operations, and pamphlets/small books about Islam and Sharia. […] Next to the radio headquarters where I was staying, there was the building of a former bank in which media workers would distribute these media items. An Armenian catholic church in Raqqa had been turned into a preaching centre and was also giving out these media items. In the film, the Tunisian munshid singer explains that to me while we are in the church. Many preaching vans would go around with a megaphone. They would stop and distribute these media items and deliver religion preaching through the megaphone. USB sticks were given mainly to fighters and had the same topics as the CDs. Ordinary people could listen to CDs and play DVDs while they did not have access to the internet. In the town of Al-Shaddada in north-eastern Syria, near the border with Iraq, there was a media centre where they were producing CDs only. They were specially making CDs with a basic machine, making only 16 copies at time. That section of the media centre was run by children. 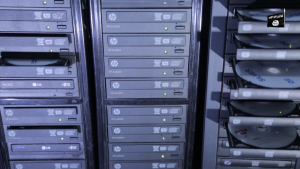 The DVD copy works of Islamic State as seen in Revelations of Satan (Wilayat al-Khayr, 25 June 2016)

Was the Hisba police involved in the media kiosks?

The Hisba police was not involved in these media kiosks. It was the media centres who were involved in all above activities.

What were some of the reactions that people gave to obtaining Islamic State media?

It was different. Some people were going to request them. I saw an 11 year old boy, coming to the al-Furqan Media Foundation and requesting a CD or DVD, but I didn’t see many doing so. By the way, when I was in Raqqa, I felt children were the most enthusiastic about living under the Islamic State. I saw people taking CDs/DVDs when offered them, while other would decline taking them. I am not able to tell the percentage of those in the Islamic State who were keen on these items.

Also, have you been able to observe how the receivers handled the media they obtained (i.e. was it appreciated, did they throw it away, etc.)?

Once they took the media I did not know what people did with them in the privacy of their home. I didn’t ask them. 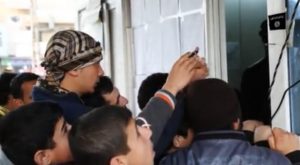 A boy holds up a USB device in a media kiosk, apparently requesting a copy of Healing of the Believers Chests (al-Furqan Media Foundation, 3 February 2015); image seen in Joy of the Muslims with the Retribution from the Jordanian Pilot (Wilayat Ninawa, 7 February 2015)

In Part 2 of this series I will present five more questions and answers with Medyan Dairieh. Moving away from internal media dissemination in the once-Caliphate, my next contribution will focus on Islamic State’s media efforts and expertise in the year 2014. Again, I would like to thank Medyan Dairieh for the interview and his permission to publish some of the results. Medyan Dairieh is on Twitter using the handle @MedyanDairieh.