The dynamic encompassing nature of Islamic State propaganda includes a wide array of messaging ranging from official media (which includes weekly news releases, professional video footage, glossy magazines, and audio announcements) to unofficial supporter-created content. A facet of this unofficial propaganda consists of online supporters’ creation and usage of Islamic State-themed stickers on the messaging app, Telegram. Islamic State supporters are present on other platforms but they have found a fairly stable long-term home on this app despite the November 2019 coordinated campaign by Europol and Telegram to disrupt the Islamic State’s media ecosystem. There are numerous reasons as to why Telegram is particularly appealing to them but an additional seemingly minor app feature adds a unique dimension: the ability for users to create their own sticker sets.

Although stickers consist of images and/or a limited amount text, this visual messaging works in tandem with other forms of Islamic State propaganda to convey and supplement multi-faceted propaganda narratives. At times, the array of narratives that appear may seem sporadic but, as Kathleen German writes in The Media World of ISIS, “…the appearance and inconsistency on the surface belies a more sophisticated media mixture of hard and soft messages whose complexity appeals to the target audiences.” The ability for supporters to construct their own sticker sets further decentralises propaganda efforts and it offers a creative outlet through which individuals can express their support. The stickers containing images are designed to evoke emotions and create a reality that Stephane Baele and Charlie Winter describe as “reinforce[ing] frames and narratives put forward by IS…[that are] consistent, carefully selected and monolithic.”

During my observation of public and private Telegram groups from 2018 – 2020, I noticed a certain degree of eagerness surrounding stickers: in the chats, supporters would ask each other for new stickers, seek advice on how to create their own sets, and express frustration if a set had been banned by Telegram before they could save it. That being said, many of the images that appear in these sets have been recycled from video propaganda already produced by official Islamic State media outlets; demonstrating how centralised official productions remain integral to decentralised propaganda and receive both a wider distribution and a longer life span.

I archived a total of 55 sticker sets containing explicitly pro-Islamic State visuals and messages. Sticker sets consist of a collection of individual stickers ranging anywhere from 1 to 120 images and/or text where the full set is given a name by the original creator. Many of the sets have names that denote affiliation with the Islamic State or, more generally, imply support for a pro-jihadist group. Others were assigned titles, such as “Busssy,” that purposely avoid implying any affiliation at all – perhaps in an attempt to decrease the likelihood of Telegram discovering and banning the set. However, even if a set is banned, it remains accessible and usable by the individual provided that they have saved the stickers before deletion by Telegram.

Based on the collected data, I noted seven dominant themes: 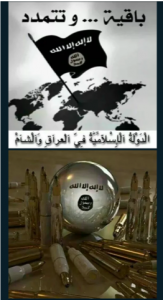 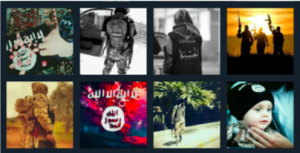 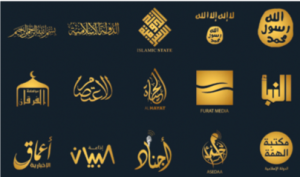 Screenshot examples of stickers that display a variety of themes

Although some sticker sets centered solely on one theme, many others included images that integrated multiple of the above listed categories, making them dynamic in nature and providing an increased opportunity for their usage. It cannot be said which sets are more popular than others because it is not possible to note the number of times a set is saved by users, however, it would be interesting to see if a relationship between the number of themes in the set and the popularity of that set exists. Interestingly, these same Telegram stickers have appeared on pro-Islamic State Hoop channels which may indicate supporters’ attempts to apply a similar format onto another platform. 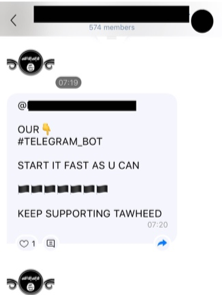 When situating Islamic State Telegram sticker propaganda in a wider context, they are yet another cog in the wheel of the Islamic State’s all-encompassing online propaganda system; a system that Haroro Ingram says is “full-spectrum in character” and “multidimensional, comprehensive, coherent.”  However, on a more detailed level, these stickers add a unique dimension to pro-Islamic State online propaganda and further a sense of what Mia Bloom and Ayse Lokmanoglu identify as a shared group identity.