In April 2015, the jihadist terror group Islamic State (IS) released a five-minute propaganda video claiming to showcase its elite naval commando unit, deliberately mimicking the appearance and tactics of world renowned Special Operations Forces (SOF), such as the United States’ Navy SEALs. Public reactions to the video mostly made fun of the amateurish and unintentionally comical content. This was not the only attempt of IS to portray SOF capabilities through its propaganda videos, even though they too were met with equal ridicule from Western media. Other jihadist groups have been much more successful in producing higher quality propaganda content claiming to show “true” SOF units and training. Unfortunately, there are two significant gaps in research and intelligence analysis: jihadist training videos as a propaganda category and groups other than IS producing these types of videos. Both have only received marginal attention by researchers and analysts.

In a study recently published by the journal Studies in Conflict and Terrorism, I addressed this important issue and demonstrated the intelligence and research value of jihadist propaganda videos around the “Special Operations” theme. After all, it is curious that such groups would invest into building such a tactical capacity, even if only to look tough and capable for recruitment purposes. Terrorist and insurgent organisations face resource constraints like any other organisation or like a regular military as well.  The financial resources to achieve and maintain meaningful SOF capabilities are significant. This includes superior equipment beyond advanced weaponry, such as for example clothing, tactical gear, adequate training facilities, and instructors, and also personnel screening procedures to identify and recruit the best potential members for such units. Arguably, such financial resources would be much better spent on outfitting a larger contingent of basic fighters with average weapons and equipment, as well as training them in the standard tactics. The strategic advantages of SOF capabilities are also unclear for jihadist groups. Let’s assume they really are able to create a small unit that would qualify as SOF by Western standards. Targeting the training facilities, key personnel (e.g., instructors) and those units directly (for example with a drone strike) would be extremely attractive. Losing an SOF team would be a serious blow to the organisation- the resources lost and the propaganda failure would be immense. There are more reasons to conclude that SOF units, even as a mere propaganda stunt, is simply an irrational investment choice for jihadist groups (or any violent non-state actor). So then why are they doing it? And what information for researchers and counterterrorism professionals can be harnessed from these videos?

In my analysis, I chose three videos from three different groups and geographic contexts: the “Special Forces Hamza al Zinjibari Training Camp” video by Al Qaeda in the Arabian Peninsula (AQAP), the “Special Forces Lions of War Camp 2” video by Ahrar al-Sham/ Islamic Front, and the “Training of the Special Fida’iyyin Force” video by the Tehrik-i-Taliban in Pakistan (TTP). All the videos were accessed through the indispensable primary source database Jihadology. As a first step, I coded each video scene by scene, separating between actual combat or training on the one hand and ideological content on the other.  Below, there are three stills from each video that show isolated scenes of specific training or combat exercises. 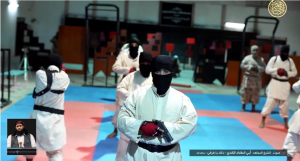 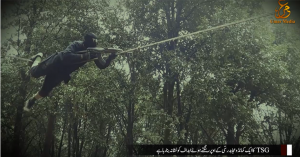 The videos differed greatly in terms of the content (ratio between ideological and training/combat footage), as well as the type of training exercises shown. Ahrar al-Sham, for example, seems to consider combat operations with armoured vehicles like tanks or personnel carriers (a fairly standard tactic for regular militaries) to be a special operations skillset. AQAP on the other hand shows highly advanced tactical scenarios, such as the kidnapping of a high value target out of a protected convoy. The question remains: how serious or feasible are the exercises shown in the videos? With the help of active service SOF personnel with police and military background, I was able to determine the average quality of the content. By grading detailed practical aspects such as muzzle discipline, coordination quality of small unit movements, the quality of the training equipment, silent communication or the realistic execution of a task (for example storming a building using multi-directional fire protection), it became clear AQAP and Ahrar al-Sham at least found well trained SOF-like fighters to perform in the videos. The TTP video on the other hand belongs to the category of involuntarily humorous videos due to the complete inadequacy of the fighters shown in it.

What then, are the important lessons and implications of this?

Contrary to the assumption that SOF capabilities are too resource intensive and an illogical strategic investment for jihadist groups or non-state violent actors in general, I found proof that some of them invest heavily and successfully in SOF skills, at least in their propaganda. The fighters shown in two of the three videos were determined to reach a sophisticated and overall high level of tactical abilities. Producing such fighters is either the result of extensive training led by experienced experts, or simply a matter of recruiting fighters who already bring those skills with them. As the purpose of these propaganda videos is to showcase SOF training in particular and appeal to a very distinct audience (e.g., potential and highly skilled recruits, high-level external sponsors), a direct consequence of the existence of such high-quality videos might be the increased fundraising and recruitment capabilities for high-skilled personnel.

Furthermore, the videos sometimes show detailed and sophisticated attack scenarios, in which some of the SOF personnel were completely unaware and proceeded to devise new tactical countermeasures. Regardless if the group is actually capable or willing to execute the scenarios depicted, other groups might very well see the videos as a source of inspiration and as a tool for tactical learning. Groups capable of creating and maintaining such a level of training with a capable pool of recruits should be viewed as a more dangerous and tactically versatile enemy. If they truly possess SOF capabilities, this would be indicative of a much more adaptable and innovative strategic-tactical organisational structure than one might expect.

This brings me to the final key lesson: training camp propaganda videos are an essential form of terrorist learning and knowledge transfer. Groups do not need to be in direct contact with each other to assess the quality and attractiveness of such videos for their own purposes. Even if AQAP or Ahrar al-Sham is unable to perform like they claim in real life, other groups might. Especially with the worrying increase of, for example, neo-Nazi groups praising jihadist commitment and useful tactical material, one can easily follow the spread of such content. In any case, we should all be much more careful to study the quality and specific content that is being shared in propaganda videos. They provide us with unique insights into the mentality and organisational mindset of a certain group.