How QAnon is Dealing With The FBI Raid on Trump

When the FBI executed their search warrant on Mar-A-Lago on August 8th, QAnon was all over the news. Their first reaction was to declare the raid a final desperate act of a flailing and doomed ‘Deep State’ that is doing anything it can to prevent Donald Trump and the mythical ‘QTeam’ from being able to secure their victory in the battle between these two forces. One of the many contradictions of QAnon is the belief that Trump, aided by Q, is always several steps ahead of his enemies and counters all of their efforts to defeat him with ease (Fig. 1). While regular people (insultingly called ‘normies’ by QAnon) would see the COVID pandemic followed by Trump losing the election and being unable to convince the courts of his claims of election fraud as signs that Trump’s enemies actually have the upper hand, QAnon remains convicted of their inevitable victory in a moment known as ‘The Great Awakening’. 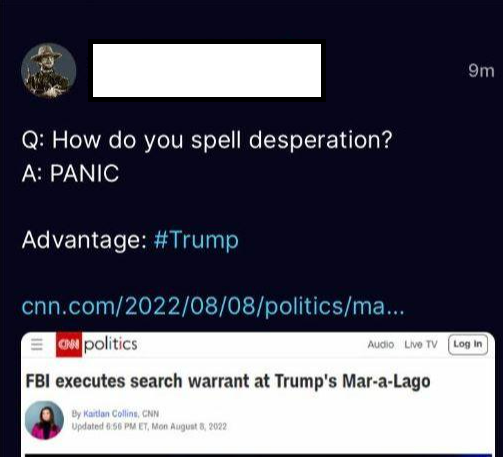 Once it was clear that the raid signified the possibility that Trump could be in some legal jeopardy, QAnon quickly fell back to one of their favourite talking points – that Trump had successfully set a trap for his bungling enemies to fall into. If anything that looks like it benefits Trump’s enemies has happened, then their reality is that Trump allowed them to achieve this supposed victory only to turn the tables on them in the near future. For example, the 2018 mid-term elections which saw the Democrats win back control of the House of Representatives were a trap that would expose their election fraud; the COVID vaccine would backfire on the Deep State and the damage it would do to society would make people see that QAnon and Trump were right about everything; the trials of Flynn, Bannon, and countless others were merely traps the Deep State had unwittingly stepped into and soon they would find their schemes thwarted and turned against them. Q repeatedly employs the terms ‘year of the boomerang’ and ‘boomerang suicide’ to describe the Deep State’s attempts to defeat Trump backfiring on them and resulting in their destruction.

How this trap is sprung is another one of QAnon’s strange beliefs about how the world works. When Michael Flynn was under indictment for obstruction of justice charges, one of the things Q would repeatedly explain to his followers was a convoluted plan in which Flynn’s guilty plea and cooperation with the Mueller probe were going to lead to the undoing of the Deep State (Fig. 2). The theory as QAnon believes involves Flynn tricking Mueller into allowing him to testify on the record and bringing up all the crimes that the Deep State committed while under oath. This, in turn, would bring about the fall of the Deep State. The reality is that you can’t bring up unrelated crimes during testimony; any competent lawyer would object to such claims being made and the witness could end up being held in contempt of court if they refused to stay on topic. Here, QAnon believes the documents raided by the FBI contain evidence damaging to the Deep State and now that this evidence is officially in the government’s hands, it must be made public. When that happens, the Deep State’s corruption will be exposed for the world to see. 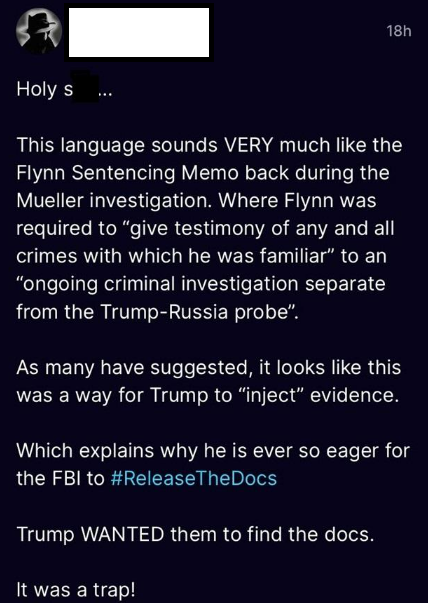 The next narrative QAnon fell back on was attacking the FBI. While this was something that mainstream Republicans were also promoting, QAnon took it to another level after the attack on an FBI field office in Cincinnati. While everyone else was condemning the attack by Ricky Shiffer, QAnon saw the attack in a different light. Throughout QAnon’s long history of violence, the movement has refused to come to terms with the fact that its extremist rhetoric and promises of brutal justice against its supposed enemies could ever lead to any real-world incidents. After the Cincinnati attack, QAnon promoters worked diligently to claim that the attack was a supposed ‘False Flag’ that the Deep State had set into motion to discredit their movement. They claim it was not the work of an honest anti-government radical who decided it was time to take matters into his own hands, but instead an act committed by anti-Trump forces seeking to paint Trump supporters as terrorists who need to be rounded up. The “glows” comment below (Fig. 3) is QAnon slang to insinuate that somebody works for the Feds.

The final QAnon talking point about the raid on Mar-A-Lago paints the idea of Trump being indicted for mishandling classified documents in a positive light. QAnon has an endless supply of portents that are supposed to herald when their victory arrives. While many of these events have names like ‘The Storm’ or ‘The Great Awakening’. This one is simply known as ‘The First Arrest’. Q decreed that the first major arrest made by QTeam would send shockwaves through the world and lead to a revolution as the masses learned the dark truth. QAnon spent years debating exactly who the person arrested would be; they speculated that it would be Hillary Clinton, or Barack Obama. Other options included former FBI Director James Comey or Dr Fauci. Now with this raid on Trump’s home, QAnon’s theories have done a U-turn –  what if the first arrest wasn’t one of Trump’s enemies, but Trump himself (Fig. 4)? 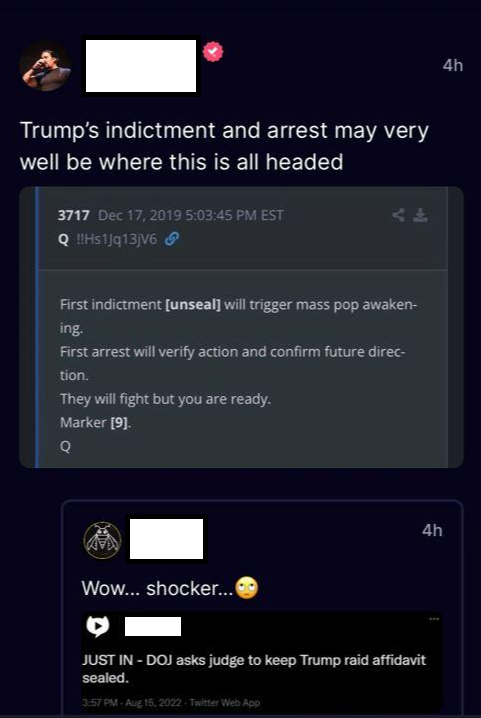 This theory is based on the following chain of events: by arresting Trump, the Deep State will have overplayed their hand, therefore exposing its corruption to the public. The prosecution will then be condemned as unjust, leading to a large Republican turnout in the 2022 midterm elections in which they win back the House and the Senate. Once that’s achieved, Trump’s trap will spring into action during his trial, and the already-discredited FBI will be forced to admit they had fabricated the case against Trump and he will walk free. Trump will then win a landslide victory in the 2024 Presidential election, return to power and crush his enemies once and for all.

If you were hoping that the prospect of Trump facing criminal charges would dampen QAnon’s support for Trump, it’s clear that it has only further solidified their faith in the former President. It is unlikely that indictment, imprisonment, or even the death of Trump would break his grip on the movement. This is a movement that has splinter factions which believe JFK Jr. is still alive and will declare himself Trump’s 2024 Vice President. No matter what Trump’s fate may be, it is clear that QAnon will remain a part of American politics for years to come.