Intersectionality denotes an entire and complex subfield within the social sciences. A connecting thread across its different inflexions is the recognition of the multidimensional character of power. This means that the different axes of social positioning such as class, race, or gender do not operate in isolation. Quite the opposite: they interact – they intersect – producing complex power dynamics and structures of inequality. The rich genealogy of the approach includes of course the influential work of Kimberlé Crenshaw and other scholars, but also grassroots activist efforts, particularly by poor and racialised women in different parts of the world (a literature review can be found in the article referenced below).

Activist framework intersectionality entails alliances between disadvantaged groups, identities, and progressive causes. Solidarity between the oppressed is perceived as a necessary condition for the challenge against injustices. Of course, solidarity cannot be practised without questioning power differentials also amongst progressives and their different activisms. This (sometimes difficult) conversation involves international unbalances. Latin America for example has a strong history of intersectional thought and, in regional forums, feminists rightly and frequently point out that such a legacy should not be forgotten.

In this context, the expression “right-wing intersectionality” (RWI) might sound almost blasphemous. However, intersectionality can instruct us to ask important questions about what is going on in terms of movement building and ideological innovation on the (far) right of the political spectrum. Indeed, there is no good reason to a priori reject the possibility that intersections between different themes and identities can also be weaponised against progressive causes and democracy at large. Similarly, why should we suppose that ‘solidarity’ cannot be forged between different people and movements devoted to protecting social hierarchies and inequality? In fact, in an analysis of more than 30,000 tweets and other interventions by 20 leading influencers, activists, and politicians my coauthors and I concluded that this form of far-right intersectional politics is exactly what is happening, at least in Latin America. We need to pay attention to this phenomenon if our aim is to understand the contemporary political landscape and expand democracy and human rights in the region and beyond.

In this Insight, I will skip the technical details of the analysis and focus my attention on the substance of the findings. My colleagues and I found that current far-right movements, parties, and influencers in Latin America and Spain uphold a narrative that places feminism, LGBTQ+ movements, and various progressive causes as the hydra they must defeat. This enemy is transnationally organised and wants to impose a dystopian and totalitarian society whose building blocks are made with the clay of gender ideology and socialism. Even though moderate conservatives are usually treated with less vitriol, they are deemed responsible for not doing enough to prevent the destruction of Western Civilization. Given the negligence of the establishment – and the commonly alleged mainstream media’s complicity – the only way to win the battle against the hydra of ‘the new left’ is for libertarians, conservative evangelicals, anti-choice activists, law & order activists, and right-wing nationalists to find common ground, neutralise their differences, and create a common front. Thus, the defence of private property, the resistance against income redistribution, the promotion of the traditional family, the assertion of the natural differences between men and women, and the opposition against the legalisation of abortion, amongst others, need to become part of a unified political agenda.

In this ‘us-versus-them’ kind of politics, both friends and foes are defined through multiple intersections between identities and causes. In other words, the internal heterogeneity of both camps is recognised. At the same time, however, each of the camps is perceived as morally homogeneous. The good identities and causes gather around us while the evil is entirely found in them. Clearly, if attention to nuance characterises intersectionality as we know it, such a feature does not travel well to RWI. The discourse of the far-right is complex in its conceptual and activist architecture, yet its effects are the violent simplification of complex issues. It is important that we differentiate between these two aspects (complex architecture/simplification) to avoid the quick dismissal of the cunning political motions of RWI. Furthermore, simplification is a big asset in a society that tires quickly from philosophy, nuance, hermeneutics, and deep reflection. The far-right channels that dominant neoliberal ethos are fixated with technology, instrumentality, ‘just do it’ and the like.

An obsession with the feminist ‘threat’ is perhaps the most acute feature of the far-right in Latin America today. Unsurprisingly, ‘gender ideology’ is a salient theme within RWI. The expression supposedly reveals that feminists impose ideology in a space where it should not be (i.e., the home and the family). There is a narrative of protection, innocence, and victimhood that warrants attention here: through the promotion of abortion, gender ideology kills babies, but it also harms children and adolescents by allowing adults to gamble with their natural bodies and identities. Thus, transgender rights and movements are another head of the hydra. Furthermore, the notion of gender ideology is used to firmly tie feminism to the left and – regardless of how implausible it might sound – to the experience of the former USSR. In other words, feminists update communism and further develop the menace that the latter poses to humanity and civic liberties. But there is yet another dimension to this narrative, which is the weaponisation of a simplistic dichotomy between ideology and science: if gender is an ideology, then it has no place in university courses and research programs. In other words, feminist scholarship becomes an oxymoron.

As we can see, the polysemy and vagueness of ‘gender ideology’ provide varied (and heavy) ammunition to the hostility against feminism which can now be articulated through unexpected intersections between the languages of science, Christianity and even liberalism. The notion both produces the hydra that it denounces and convokes multiple swords to cut off its head. A particular form of intersectional politics is again present at both ends of the operation as the imagined enemy gathers all the ‘bad identities’ (i.e., radical feminists, subversive leftists, atheists, and LGBTQ+ people) and all the ‘good identities’ (i.e., healthy families, decent and hard-working people, straight and religious individuals, gender-conforming men and women who respect nature). This antidemocratic narrative about a battle between good and evil is seductive and even invites (mostly male) journalists or scholars to join – and some do, even while distancing themselves from the most grotesque expressions of anti-feminist politics.

The theme of gender ideology opens several doors for discrimination and violence to appear in mainstream discourse. RWI is a smartly formulated invitation for everyone listening to defend the inequality, little or big, that favours them. Anyone can inadvertently incorporate its language even when the far-right feels far away. Unsurprisingly, it has become a common opinion that while far-right leaders are too extreme, they offer important truths such as that feminists have gone ‘too far’. What is intriguing is that the recognition of the rights of others is experienced as a loss of freedom by the dominant groups which takes us back to the dispute over notions of oppression and victimhood (the far-right has its own attachments to innocence). Only in this context can we understand the popularisation of violent expressions such as ‘feminazi’. Again, the narrative penetrates the political system weaponising democratic institutions against human rights. In Uruguay, we see MPs of respectable and official parties like Graciela Bianchi using this language more and more and sharing the stage with extremist personalities like the writer and advocate for human rights violators Mercedes Vigil. This is just one example of many that iterate across the continent.

Given the breadth of the ambush, feminists have no escape: they either break sacred rules, go against the order of nature, do bad social science, are totalitarian, are manipulated by Marxists, or are simply immoral. Below there is a tweet by Sara Winter, a Brazilian activist and influencer, that exemplifies RWI. It claims that “inclusion” is a trojan horse for gender ideology, abortion, Marxism, and corruption. The back and forth between conceptual differentiation and conflation is interesting, as these forces are perceived as both distinct and the same at once. Winter has been involved in explicitly anti-democratic and even armed activity yet as said before this type of narrative gets replicated by more moderate political actors as well. 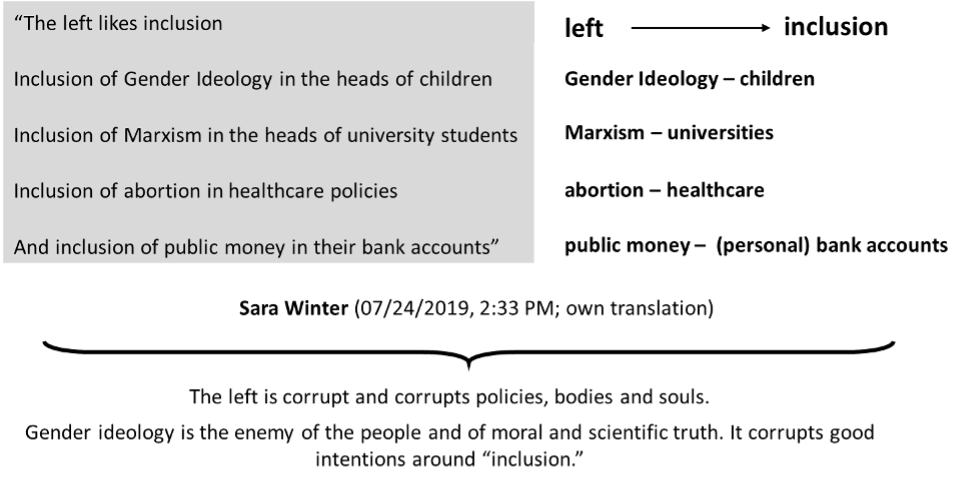 Agustín Laje and Nicolás Márquez are the authors of El libro negro de la nueva izquierda. Ideología de género o subversión cultural (The Black Book of the New Left. Gender Ideology or Cultural Subversion) which has become a far-right manifesto in Latin America and Spain. Through a mixture of liberalism and conservatism as well as of religious and scientific references, the text simultaneously attacks feminism, socialism as well as entire groups, in particular LGBTQ+ people. Because of its clear-cut conservative intersectionality, it epitomises RWI. Márquez’s tweet below illustrates the connection that the current far-right makes between the failed communist experiment of the USSR and ‘gender ideology’, while Laje’s embodies the gathering of the diverse right-wing causes into one single front. Note that the vindication of the Argentinian “glorious armed forces” is a way to downplay – if not fully endorse – the right-wing authoritarian regime that ruled Argentina between 1976 and 1983 and ‘disappeared’ thousands of citizens. It is ironic that imaginary gender dictatorships take the place of the real and thus more dangerous ones. Laje and Márquez are frequent guests of the mainstream media which they accuse of being complicit with gender ideology. In his public speeches, Márquez has passionately called for a coalition politics of the right that encompasses aspects of liberalism, conservatism, and nationalism.

Social media has been, and continues to be, instrumental in the proliferation of RWI. Twitter in particular allows the far-right to bypass the conservative establishment’s channels of communication and, therefore, to disrupt the most basic codes of etiquette and civility without check. These aggressive strategies include the use of trolls and narrative moves such as equating honesty to cruelty and the appeal to the edginess and sexiness of political incorrectness to legitimise violence. Furthermore, we do not need to go as far as to say that the medium is the message to realise that the speed and brevity of interactions on Twitter restrict the space for abstraction and thoughtful engagement with ideas. This medium does have an impact on political engagement that fits the tendency towards simplification I referred to above. Overall, the far-right social media activity constantly promotes the intensification of violence which unleashes a vicious cycle where everyone gets permission to engage in uncivil discourse.

The far-right’s intersectional war on gender ideology is an assault on freedoms and human rights. This kind of politics invites allies and adversaries to put in motion unchecked emotions and words in ways that erode democracy from within. Sadly, many accept the invitation. How to respond to this phenomenon in ways that diminish violence and promote constructive dialogue is a crucial democratic challenge of our times.