Zelenskyy, ‘Denazification’ and the Redirection of Holocaust Victimhood

As with many global crises, the online far-right is attempting to frame Russia’s invasion of Ukraine through their existing worldview. Indeed, far-right conspiracy theorists have reacted to the war by doing what they do best; conspire and theorise.

Antisemitism remains a central component of the extreme-right worldview. Conspiracy theories such as the Great Replacement are motivated by the same form of antisemitism which has existed for centuries. At its root, an inherent mistrust of Jews, an accusation of ulterior motives, and an assumption of greed for money or power. It is well known that this is what led a terrorist to attack the Tree of Life Synagogue in Pittsburgh; not just his hatred for Muslims and refugees, but his conspiracy that pulling the strings behind perceived population change is a monolithic, all-powerful Jewish force.

Turning their attention to the war in Ukraine, many on the extreme-right have noted the outward Jewish identity of Ukrainian President Volodymyr Zelenskyy. Combined with Putin’s ‘de-nazification’ narrative, together they provide the extreme-right with the perfect strawman around which to centre their latest antisemitic conspiracy.

Across the ideological far-right spectrum, a diversity of stances on the Russian invasion can be found. Some neo-Nazis see the conflict as a ‘brother war’, where white people have allegedly been pitted against other white people by a Jewish conspiracy, with Zelensky at the helm. Others have chosen a side with which to show solidarity, from those who praise Putin for standing up to the West, to others who sympathise with Ukrainian nationalists and the attack on their sovereignty.

In some cases, the war in Ukraine has been inputted into existing conspiratorial narratives regarding the perceived Jewish origins of the pandemic and subsequent vaccine rollouts, coalescing into a super conspiracy which sees Jews at the centre of every ill.

In a rant reposted to a Telegram channel associated with the Proud Boys, one extreme-right figure employed traditional antisemitic tropes to blame “Jews and their loyal puppets.” Narratives of puppet masters were accompanied by accusations of “blood sacrifice,” mirroring the medieval blood libel, references to Jews as “bankers,” and the typical argument that Jewish people play the victim. 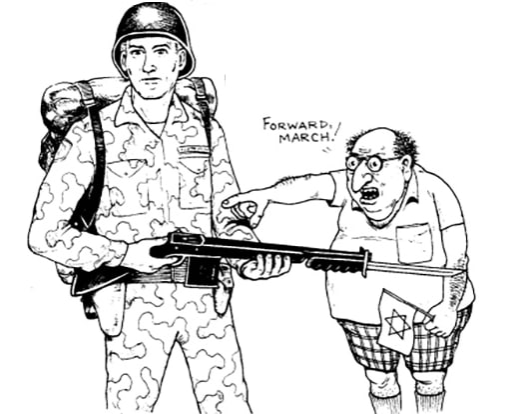 The above cartoon typifies this form of antisemitism. With a hook-nosed figure taken straight from Nazi playbooks representing Zelenskyy, the Jewish President is depicted to lead soldiers into war while remaining in his underwear.

Much focus has been placed on the Azov Battalion, a neo-Nazi Ukrainian paramilitary. For some, like the cartoonist, this is evidence that Jewish people give the orders while white people fight and die.

In order for the ‘denazification’ narrative to be justified, Ukraine, its Jewish President and its army must be seen to be Nazi-like. This demands a redirection of Holocaust victimhood and a deliberate falsification of Jewish history. Whereas classical Holocaust revisionism attempts to delegitimise historical facts, by arguing about the feasibility of gas chambers, or the pre-war Jewish population, much contemporary Holocaust delegitimisation will instead seek to redefine the roles of victim and oppressor. By identifying as the victims of perceived totalitarianism, Holocaust revisionists will claim that they are the true victims of Nazism.

White supremacist Joseph Jordan, who goes by the pseudonym Eric Striker, exemplifies how this functions in the context of the Ukrainian invasion. As news emerged of the Russian strike near the site of Babi Yar, a memorial to one of the most horrifying instances of Nazi mass murder, Jordan posted to Telegram that the “Babi Yar museum has been denazified by the glorious motherland’s anti-fascist self-defence forces.” In order to see Russia as a ‘denazification’ force, in this scenario Jews themselves must be the Nazis. As history is increasingly manipulated and politicised, we move further and further from the truth of the Holocaust.

Antisemitic conspiracy theories about President Zelenskyy have certainly not been limited to the extreme-right. Across the ideological spectrum, conspiracy theorists have utilised Zelenkyy’s Jewish heritage to denote him as a puppet of the mainstream media or foreign governments, all rooted in the same traditional antisemitic tropes.

What is common to conspiracy theories which derive from across the ideological spectrum is their obsession with Zelenskyy’s Jewish identity, and its accompanying suspicion. In the context of Putin’s so-called ‘denazification’ project, this not only serves to motivate contemporary antisemitism, but rewrite its history. Antisemitic conspiracy theorists recognise twentieth century totalitarianism, but increasingly see themselves as the victims of history’s alleged reappearance. Not only does this fundamentally mislead the listener about the facts of the Holocaust, it increasingly and deliberately muddies history. This is similarly exemplified through the use of yellow stars in recent anti-vaccine demonstrations. As we move farther away from the Holocaust, revisionism and its subsequent weaponisation against Jews is steadily increasing.

From QAnon to COVID-19 to Ukraine, conspiracy theories centre antisemitism and sow mistrust of Jews. This has long been an antisemitic typology, but with new clothes, new language and new current hooks across the ideological spectrum, its success is only growing.