The Boogaloo Movement, Coded Communication and the Need for Context-Based Moderation

From the political fringes to the front pages, the Boogaloo Boys were thrust into the national spotlight last year. But what do they actually believe in, how do they communicate, and how does this manifest online? Storyful dives into how we got here, and why context is key in online moderation.

The past year has seen an explosion in mainstream references to the Boogaloo Boys. The group received attention like never before—but what was less obvious was how its decentralised network of actors operated and communicated online.

Storyful’s analysis for the Global Internet Forum to Counter Terrorism (GIFCT) in the aftermath of 6 January reveals a variety of groups and individuals contributing to an ever-evolving and fluid visual language online. Key themes of the research discussed in this post include:

Emojis function as insider signals for the movement, frequently included in members’ usernames, biographies, and conversations to avoid online detection and identify themselves to others by using otherwise commonplace or innocuous imagery. For example, the 🅱️ emoji and zero ‘0’ are interchangeably used by ‘🅱️ 00gal00 🅱️ 0ys’. Identifiers like the hibiscus 🌺  flower, a reference to the movement’s Hawaiian print imagery, and igloos 🍙, also aim to go undetected by platform monitors.

Members refer to themselves as ‘Boogaloo Bois’, ‘Boogs’, and ‘Boojihadeen’. Other covert catchphrases include ‘Big Igloo’, ‘Icehouse’, and ‘Fajitas’, the latter of which refers to guns or weapons, while ‘Fiesta’, ‘Hoedown’, and ‘Hootenanny’ refer to an armed conflict. Storyful’s research identified emojis particular to the movement and their meanings, including the following:

The Boogaloo movement comprises a decentralised and incoherent network of groups. Members of the so-called ‘Boogaloo Boys’, who take their name from the 1984 film “Breakin’ 2: Electric Boogaloo,” espouse principles that are often divergent and progressively at odds with each other. Analysis of online communications between group members reveals that divisions between libertarian and alt-right subsects are becoming increasingly apparent. This dynamic, rapidly evolving nature of the movement presents a challenge to platforms seeking to learn about the proliferation of extremist content, as well as instances of potential violence stemming from social communications.

Subsects of Boogaloo Boys, typically libertarians that hold anti-bigotry as a core principle, have rejected the movement’s white supremacist associations, taking a stand for unity with Antifa, BLM and LGBTQ+ communities on mainstream platforms. Prominent groups, such as the Unity Coalition and Hibiscus Society (claimed to have since broken ties with the movement), denounced the Capitol riot. However, they also partook in planned armed marches at state capitol buildings later in January. In one viral speech (1.1m views), the groups denoted Boogaloo, Antifa and right-wing militias as forces fighting against the “corrupt” US government.

Certain subsects of the Boogaloo Boys have designed and shared memes embracing BLM and LGBTQ+ social causes. Members have posted links to ‘Queer Anarchist Boog’ merchandise, incorporating the rainbow flag alongside Boogaloo visuals of tropical flower prints and igloos. Gun imagery and memes are also a theme within the wider Boogaloo community. 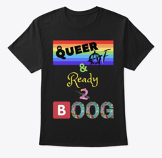 Hard-line factions of Boogaloo Boys have largely avoided mainstream open platforms and rejected coalitions of unity with leftist movements. The aforementioned subsects have been labeled as Antifa and ‘federal plants’ by alt-right fringes attacking their LGBTQ+ support. Some of these alt-right groups have displayed more extremist and white supremacist views on platforms such as Telegram, with posts on Boogaloo Intel Drop (9.48k members) sharing content from outright antisemitic and white nationalist channels.

Alt-right factions draw upon iconography from white nationalists and antisemitic symbols, including Pepe the Frog. Militia and gun visuals have been commonly shared, as well as doomsday prepper images and memes. Satirical memes feature the rainbow flag and BLM, and attack more inclusive factions of the Boogaloo movement. Many posts across communities play on themes around redaction and censorship. 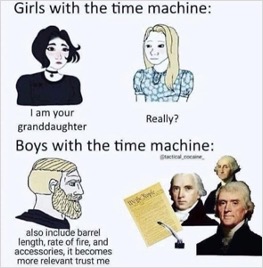 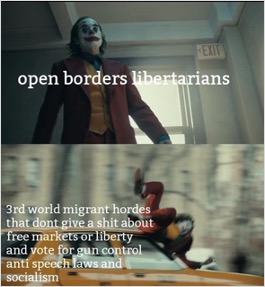 Figures 3 and 4. Pro-gun and anti-immigration memes from Telegram

The Need for Contextualised Moderation on Platforms

The seemingly more moderate and inclusive factions active on platforms such as Facebook, Twitter and YouTube have the potential to convert audiences to support armed resistance. Specific risks include the organisation of armed protests, the sharing of plans to fabricate weapons such as 3D-printed guns, and lone-wolf terrorism.

The rapid progression of the Boogaloo movement from online communities to in-person gatherings further encourages adherents of the movement to pursue their fantasy of a second US civil war. With coded keywords and emojis being used by adherents to covertly coalesce on platforms, a nuanced understanding and contextualised moderation of the Boogaloo movement’s factions and communication strategies will help mitigate the threat they pose.