On 9 October 2020, devastating forest fires broke out in multiple locations of Hatay province and became headlines in Turkey. For several days, footages of billowing smoke, huge flames and a terrified rush of panic-stricken people occupied TV screens and were disseminated on popular social media platforms like Twitter, Facebook and Instagram. Children of Fire Initiative (CFI hereafter, and ateşin çocukları inisiyatifi in Turkish), a self-proclaimed group believed to be linked to the Kurdistan Worker’s Party (PKK), claimed responsibility for the fires by posting a message on a pro-PKK website.

Although the group had claimed responsibility for a spate of environmental terrorism attacks earlier, those claims went largely unnoticed by the general public. It was the Hatay fires that brought CFI in to the limelight as, for example, the #atesincocuklari hashtag went viral along with other related hashtags like #hatayyakiliyor (Hatay is being burnt), #hatayipkkyakti (Hatay was burned by the PKK) and #iblisincocuklari (Children of Satan). CFI uses a Twitter account, a YouTube account, and a website for spreading propaganda and cultivating support for its attacks. As the group does not seem to be interested in differentiating between the attacks when claiming, it is curious to know why the group mindlessly claims almost all of its attacks and why the Hatay fires were different. The following is a snapshot of ongoing research that aims to respond these questions.

The issue of terrorist groups’ claiming responsibility (credit-taking) for their attacks is well documented. Researchers and scholars have focused on both claim and not claim decisions (Hoffman 1997; Rapoport 1997; Hoffman 2010; Kearns, Conlon & Young 2014; Abrahms & Conrad 2017). Rationalist approaches have assumed that terrorists are rational actors, who use costly signaling in a strategic way to achieve goals and convey a political message. From a rationalist perspective, claiming an attack is cheap, easy and associated with many potential benefits. Claiming also draws public attention to a group’s cause and “helps prevent others from free-riding by taking credit for another group’s work” (Kearns 2019).

On the other hand, not taking credit for an attack may be equally wise if claiming would be detrimental to a group’s public image (Pluchinsky 1997), among other things such as: situational factors, attack characteristics, the group’s ideology and the group’s goals (Kearns 2019). Interestingly, according to the Global Terrorism Database (GTD), it seems that only 16% of attacks between 1998 and 2017 were claimed. As Hoffman (1997) noted, the distribution of claimed and not claimed attacks is “not random across groups, space or time; they are influenced by a series of attack-level and country-level factors.”

Besides the foregoing approaches that treat claiming in a binary fashion, there are a few studies that introduced a third approach by examining unclaimed but ‘attributed’ attacks (e.g., Rorie 2008; Min 2013; Kearns 2019). The abovementioned case of CFI allows for a fourth approach in understanding terrorists’ credit-taking; i.e., exploring claiming decisions of terrorist sub-groups or proxies. 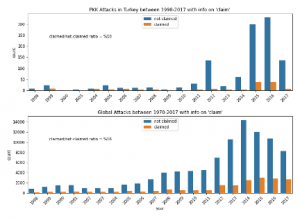 As shown in Figure 1, the claimed/not claimed ratio for global attacks between 1998 and 2017 is around 16%, whereas it is around 10% for the PKK attacks in the same period. What factors impact this is beyond the scope of this paper. However, an analysis of the 1267 attacks by the PKK and its affiliated groups in the GTD during the said period by considering sub-group types yields, for example, that Kurdistan Freedom Hawks (TAK) claimed all of its 29 attacks that left 160 people dead and 583 wounded. TAK can be defined as a sub-group or proxy of the PKK, which appears to have a function of easing intensified military pressure on PKK members in Southeastern parts of Turkey by perpetrating attacks in, and diverting the government’s attention to, the country’s Western provinces. Considering, based on the GTD, that the PKK almost never claims attacks on civilians in the West, attacks by TAK provide the PKK with an opportunity to protect its brand name and international image within the context of plausible deniability.

The foregoing analysis applies to CFI as well. In recent years, the PKK has been struggling to maintain its salience in Turkey’s political agenda due to heightened military pressure on the group within Turkey and the northern parts of Iraq and Syria, especially since the collapse of the Turkish-Kurdish Peace Process in 2015. Through CFI attacks, the PKK seems to be sending a message to its supporters that it is still active despite current relative silence of the PKK central, while aiming to shield itself from public backlash and/or counterterrorism measures against it. The fact that around 75 percent of posts on CFI’s Twitter account and almost the entire content of its website is in Kurdish demonstrates that the primary purposes of those postings are propaganda, reassurance and consolidation directed towards the group’s power base lest they become disillusioned.

CFI’s Real Debut in Violence: The Hatay Fires and Their Polarising Effects

Researchers, scholars and pundits often liken terrorism to theatre or spectacle produced for viewers, many of whom live apart from the locus of violent events. As Nafees Hamid rightly put it, the psychological radius of a terrorist attack is much larger than its physical radius. Yet, one of the most important factors of societal impacts of a terrorist attack, inter alia, is the target type. In a country where the environment sits near the bottom on a list of core values, environmental targets such as forests, fields, meadows or animals, thus, may not normally generate fear or concern among people. This explains why most of CFI’s previous arson attacks did not grab people’s attention in Turkey.

In connection to this, Brian Jenkins had famously described that “terrorists want a lot of people watching, not a lot of people dead.” Previous empirical research also suggests that there is a correlation between news coverage and the target type. The Hatay fires were different in these respects; they were very close to residential areas, they seriously threatened human life and, as such, received a lot of media coverage. The spike in Google trends search for Hatay fires, CFI and the PKK on 10 October and the ensuing days (Figure 2) not only buttresses the foregoing arguments but also demonstrates the perceived relationship, or oneness, between CFI and the PKK.

Furthermore, trending hashtags on Twitter (Figure 3) shows how, through the Hatay fires, CFI was able to drive wedges between different political groups and rekindle the ashes of polarisation in the country. To mention a few, #PkkYandasiChp (PKK supporter CHP [Turkey’s main opposition party]) and #ChpMahvediyor (CHP is destroying) make references to President Erdogan’s frequent accusations of CHP’s support for the People’s Democratic Party (HDP), which is seen by many as the political arm of the PKK. Hashtags like #IblisinCocuklarisiniz (You are the children of Satan), #IhanetinCakallari (Jackals of Treason), #DevletBahceli (the leader of the Nationalist Movement Party) and the likes show how nationalist sentiments were triggered by the event. Last but not least, #MeseleAgacDegilmisAnladik (It wasn’t about trees, we understood) is a more complex one. The motto itself is a signifier of the Gezi events in 2012 and it is loaded with criticism of the governing AKP. A popular narrative among anti-AKP groups over the Hatay fires contains an innuendo that the fires were started by the government, not CFI or the PKK, to prepare the field for a planned mine project.

More importantly, polarising effects of the Hatay fires on social media platforms were also seen offline. Dyadic structure of morality suggests that moral situations are divided into two roles of moral agents (doers of good and bad) and moral patients (recipients of good and bad). In several locations, some Turks, who might have felt themselves as the moral patients vis-à-vis the devastating Hatay fires, attacked ordinary Kurds whom they most likely deemed moral agents of their emotional suffering.

Most of CFI’s online activities are related to burning of forests, fields as well as properties of private individuals and the state. But they also include attacks on or intimidation of politicians and ordinary citizens, warning about future attacks and claiming perpetrated attacks. Similar to Al-Qaeda and Islamic State, CFI’s online postings (a majority of them are video footages) are festooned with a popular, emotive Kurdish song or poem that aims to touch a chord with the Kurdish audience. These postings feature and glorify violence, and thus be construed as communicative political violence.

All in all, proceeding from the case of CFI as a terrorist proxy, this ongoing research aims to contribute to cross-cultural research on credit-taking and, following Bishop and Macdonald (2020), calls into question the efficiency of existing regulatory frameworks as well as content auditing mechanisms such as the Content Incident Protocol (CIP) of the Global Internet Forum to Counter Terrorism (GIFCT).