French Jihadism on the Internet: A Quantitative Overview

France has been one of the most-targeted Western countries by jihadist organisations in the past 5 years and one of the most concerned by its recent development (40% of Europeans who joined IS are French). France has first been attacked by groups operating in the civil war in Algeria, like the GIA in the 1990s, before being targeted by al-Qaeda’s global jihad networks in the 2000s. Since that date though, the country has increasingly faced homegrown activism and the threat of burgeoning national and local subgroups. Of course, these developments echoed major international events such as 9/11 in the U.S., 7/7 in the U.K., the war in Iraq, the rise of al-Qaeda in Mesopotamia and North Africa, and the outbreak of the Syrian civil war in 2011.

This experimental paper offers an overview analysis of requests related to jihadism on the French Google search engine.

We used French Google’s ‘Trends platform’ in order to identify historical evolution on how French relates to this matter. We examined the frequency of about twenty keywords referring to jihadi and radical Islam activism on Google searches between January 2004 to October 2020 (the longest period available).

We also looked for terms indirectly linked to these topics in the public debate such as the concept of French secularism or ‘laïcité’ and the use of the word ‘islamophobia’.

We tried to respond to the following questions:

1) What are the historical trends and the big picture of overall interest in Islamist terrorism in France? 2) Can we identify different phases in the way French Google users address jihadism and how this relates to different periods of jihadi activism?

3) Can we draw a statistical relationship between terrorism and jihadi-related events, on the one hand, and the increase in polarising public debates around ‘secularism’ and ‘islamophobia’ on the other?

In order to do so, we looked at the frequency of the use of the following terms in French (here translated into English) in the Google search engine for the past sixteen years:

These data have been collected on a monthly basis following two multivariate analysis methods: a principal component analysis (PCA – which is a type of statistical treatment) and a manifold learning approach (UMAP). 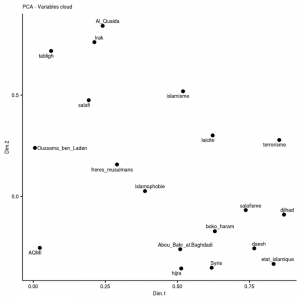 The PCA variables cloud shows a polarisation between two periods corresponding to two axes, one vertical concentration of the variables in the top-left-hand side) and the other horizontal (concentration in the bottom-right-hand side).

The vertical axis represents the prime dimension of PCA and is characterised by an interest for ‘tablighi’ movements and the relatively old and rare use of the word ‘salafi’. These occurrences are associated with searches on al-Qaeda, Iraq, Osama bin Laden and to a lesser extent, AQIM.  The second sub-group of words which appears on the horizontal axis underlines a strong concern about daesh, the Islamic State, hijra, Salafism and the situation in Syria. During this period, the jihadi leader who channels the biggest interest is Abu Bakr Al Baghdadi. One can note that ‘laïcité’ and ‘islamophobia’ are not fitting into this double-axis pattern. This indicates that concerns for Islam and the place of Muslims in the French society are not linked with concerns about jihadi groups. Both issues seem addressed independently from each other and following their own dynamics on the web search engine. 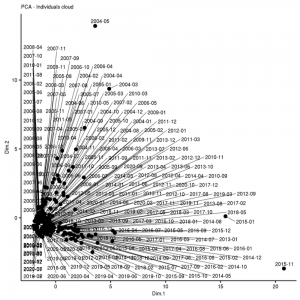 The PCA individuals cloud confirms a polarisation between two periods. It shows an early time, during which interests were focusing on the situation in Iraq, al-Qaeda, with little use of specific jihadi terms. On the opposite side of the spectrum, the period corresponding to the January 2015 ‘Charlie Hebdo and the hypercasher’ onslaughts and the November ‘Bataclan’ massacres, underscores two peaks of requests about IS specificities and jihadi motives. Between these two episodes, the number of requests is close to normal. Moreover, in sharp contrast the Bastille Day 2016 Nice truck attack did not trigger the same amount of interest for French Internet users than those of 2015. Quite surprisingly, the data structure seems to imply that interests for these issues fluctuate significantly over time, skyrocketing after the first attacks and then falling rapidly afterwards and over the long run.

These preliminary results are then interpreted using UMAP technique or manifold learning approach which takes into account the data overall variations. 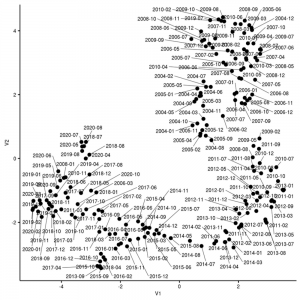 The UMAP individuals cloud provides complimentary insights. We clearly distinguish four different periods in the structure of requests on Google.

The first one goes from 2004 to 2010. Jihadism appears as an external and international issue taking shape around the struggle against al-Qaeda and the U.S. military intervention in Iraq and its offspring.

A second period stems from 2011 to summer 2014. It is marked by a decline in the search for terrorism-related issues, despite the Toulouse and Montauban attacks in March 2012, the first purported by a jihadi on French soil since 1996. At the same time, hundreds of French joined the jihad in Syria and Iraq, without this seeming to attract peculiar attention on the web.

A third ‘wake-up call’ sequence spreads from 2014 to 2017. It corresponds to the rise of IS in the Levant and the subsequent terror campaign in France that deeply impacted French society. Searches are characterised by words expressing resilience and anger but also anxiety and nervousness that have so far been latent.

The clash around Charlie Hebdo’s editorial lines takes shape during this phase and remains to this day very vivid (especially since airings for the trial are taking place in France). Meanwhile jihadi-supporting groups are using this debate to mobilise sympathisers.

The last and ongoing period starts at the end of 2017 and is marked by a new decline for terrorism-related features. This can be explained by the fall of IS’s self-proclaimed caliphate in the Levant and the rise of other issues debated on the Internet, such as the Yellow vest movement and the Covid-19 crisis. They have relegated radical Islam issues in the background, for an uncertain period of time.

This preliminary overview and analysis of Google Trends Data show different ruptures in French approaches and relations to jihadism. Although a homegrown deeply rooted jihadism was operating in France since the early 2000s, this phenomenon was first perceived as an international and distant issue. It only became of major domestic concern after it manifested violently and bluntly on French soil in 2015, and for a relatively short period of time afterwards.

By the end of 2017, it has been degraded to a secondary concern in a context of social and sanitary crisis. Yet, an indirect understanding of these results is that the study of jihadism must be consistent in relatively untroubled times, which tends to correspond to internal transitional phases within European jihadi movements.