Jihadists see COVID-19 as an Opportunity

Jihadists in general have cautiously welcomed the COVID-19 pandemic, seeing it mostly as a problem for their enemies and an opportunity to make gains. So far, Islamic State (IS) has been the most vocal about exploiting the virus outbreak to step up attacks globally. But other jihadist groups who have not made such calls still see opportunity in the pandemic. They are hopeful that it will ease military pressure on them by distracting governments and armies.

Jihadists largely believe the pandemic is sent by God to punish “infidels”, and, consequently, to help jihadists. These interpretations altered slightly when the pandemic started to affect Muslim countries. Many began saying that COVID-19, which they still insisted was God’s “soldier”, was sent as a wakeup call to humanity, including Muslims, to “return to God”.

So far, the pandemic does not appear to have had any notable impact on the activities of jihadist groups. In fact, IS attacks actually rose in April and May compared to the first three months of the year. However, this could change if the situation worsens in areas where these groups are active, such as Africa and the Middle East. 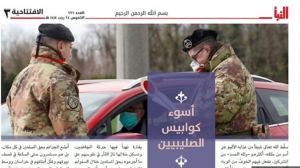 (Source and description of above image: Editorial of IS weekly paper al-Naba, dated 19 March. In it IS tells its followers that Western armies are now preoccupied fighting the pandemic)

The clearest distinction in responses to coronavirus was between IS and its arch rival al-Qaeda. While IS saw the pandemic as an opportunity to call for attacks, al-Qaeda considered it a chance to preach and invite non-Muslims to Islam. The differing responses from al-Qaeda and IS to the pandemic are representative of the groups’ individual approaches and media strategies.

While al-Qaeda commonly pursues a ‘hearts-and-minds’ strategy to win over ordinary Muslims and occasionally Western nations, IS adopts a blunt, confrontational and uncompromising approach. However, both groups agree that the pandemic, in their view, heralds a new era in which the West will be weakened and jihadists will be able to operate more freely. In the editorial of its weekly paper al-Naba on 19 March, IS told its followers that Western armies and security forces are “stretched to the maximum” in their support of government efforts to curb the spread of the virus.”The last thing they [Western governments] need are new caliphate attacks similar to those of Paris, London and Brussels”, IS said, in reference to past attacks.

In addition, IS said, Western forces are constrained in their deployment to fight jihadists abroad given the fear of infection. These conditions, it told its members and supporters, presented a golden opportunity for them to strike harder and “show no mercy”. IS’s call for attacks in the West and elsewhere on 19 March clarified the group’s position on jihad during the pandemic.

A week prior to that, many Western mainstream media outlets interpreted an IS health advisory to Muslims as being a directive to its militants to not travel to Europe – something IS did not actually say.

In the group’s leadership message on 28 May, IS said the pandemic was God’s punishment to the West for fighting the group, and told its militants to get ready to grab future opportunities that it implied would be presented through the repercussions of the global health crisis.

Meanwhile, al-Qaeda has used the pandemic to preach. 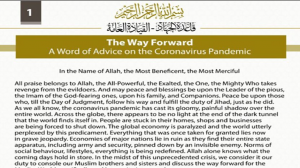 On 31 March, it released its first official comment on the health crisis in a detailed five-page statement. Under the subhead, “A general invitation to Western nations to enter Islam”, al-Qaeda urged a consideration of the moral and divine lessons of the coronavirus and how it had rendered strong economies, armies and governments “helpless”.

In an uncharacteristically conciliatory message to non-Muslims in general and Western nations particularly, al-Qaeda said: “We would like to express our strong desire for you [non-Muslims] to become our partners in heaven… Just as we share life on this earth. It is our desire and wish that we all share eternal life in heaven. Therefore, we invite you to get to know Islam and convert to it”.

It told them to take advantage of the lockdown to read and learn about Islam “through credible sources”. But al-Qaeda’s messaging hasn’t all been conciliatory. 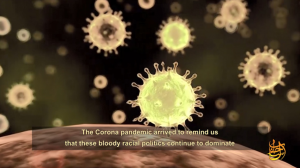 (Source: Al-Qaeda video released on 19 May)

The group has strongly gloated at the impact of COVID-19 on the US in particular, seeing it as the work of God to bring down its mighty economy and superpower status. In its flagship magazine One Ummah (One Nation) published on 22 May, al-Qaeda described coronavirus as “a clear sign of divine changes engineered by God” to weaken the US. In that same magazine, it made a strong call for attacks against US and Israeli targets worldwide. 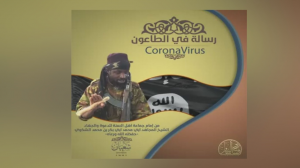 (Source: Boko Haram video from 15 April on the subject of COVID-19)

Jihadists largely see COVID-19 as punishment from God to “infidels”. As such, they have widely described the virus as a “soldier of Allah”. Jihadists have shown little appetite for conspiracies about the development and spread of the virus in labs and mostly believe it is a divine message to humans.

In its weekly paper al-Naba on 26 March, IS ridiculed Muslims who repeated “ignorant” theories about the US or Chinese governments’ involvement in developing the virus. IS’s argument was not meant to defend the US or China against foul play, but to assert that God alone, rather than man, controls events of the scale of the COVID-19 pandemic.

Gloating has been a key sentiment expressed by jihadists particularly towards the West. In early April, al-Qaeda’s Somalia affiliate al-Shabab hailed COVID-19 as punishment from God to “infidels” and urged Muslims to celebrate the virus outbreak in the West. Later that month, the group reiterated its position, saying the virus is “God’s plan” and told Muslims to be happy that “God has avenged you against your tormentors”.

This was also Boko Haram’s position. In a message on 14 April, the group’s leader Abu Bakr Shekau celebrated the spread of the virus in the West, contrasting it with his group alleged wellbeing. “We are fine fine fine. You have the virus, we have the antivirus, which is God”, he said.

Jihadists have also criticised responses by some Western states, such as the US and UK, to the pandemic. On 19 May, al-Qaeda accused both countries of pursuing COVID-19 strategies, including “herd immunity”, that it said are designed to get rid of the weak and elderly, comparing such policies to the practices of Nazi Germany.

But as coronavirus cases increased in Muslim-majority countries, jihadists adjusted their interpretations, adding Muslims to the mix of “sinful” humans causing God’s “wrath”. Al-Qaeda, for example, in its comment on the pandemic on 31 March, told Muslims that the spread of the virus among them was the result of their laxity in observing Islam and its teachings. “Truth be told, the arrival of this virus to Muslim countries is due to our own actions. It is our fault because we have moved away from God’s path”, it said as it urged Muslims to repent.

This message to Muslims appeared to contradict the group’s message to non-Muslims in the same statement telling them that their salvation lie in joining Islam.

COVID-19 as an opportunity 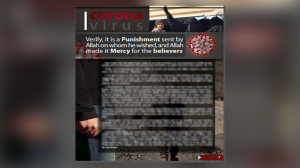 (Source: Pro-IS magazine Voice of Hind calls for attacks in India and elsewhere during COVID-19)

Jihadists largely see COVID-19 as a chance to make gains or at least avoid losses while the world is preoccupied with fighting the pandemic.  In the latest issue of its flagship magazine One Ummah, al-Qaeda told Muslims that now is a good time make gains given the “grave [political] divisions” affecting the US and the impact of the COVID-19 pandemic on its economy. Describing the virus as an act of God, al-Qaeda promises Muslims glad tidings and tells them to get ready to “lead the world once again”.

IS, on its part, has repeatedly and gleefully reported on the alleged impact of COVID-19 on the deployment of Western armies in the Middle East, particularly Iraq. In April and May, IS attacks in Iraq surged. It is not clear if this was the result of the government’s preoccupation with COVID-19 measures or ongoing political unrest in the country, including an apparent rollback in US operations against IS in Iraq. 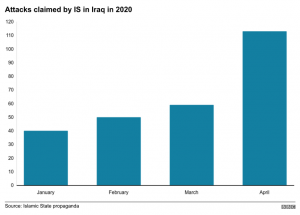 Also in April, al-Qaeda’s Sahel branch, Jamaat Nusrat al-Islam wal-Muslimin (JNIM), gloated that the “Godsent” virus was having an impact on foreign troops fighting jihadists in the African region. JNIM claimed that the spread of the virus in France and Spain – both members of an anti-jihadist coalition in the Sahel, and purported infections among “invader forces” in Mali, were prompting foreign troops to reduce or suspend operations in the region.

No clear impact on jihadist activities

In April, BBC Monitoring looked at the activity of three jihadist groups: IS, JNIM and al-Shabab. According to data collected from these groups’ official or affiliated media outlets, the rate of attacks in March, when the pandemic started to take hold globally, showed no signs of a decrease from the previous two months. IS-claimed attacks have in fact increased. 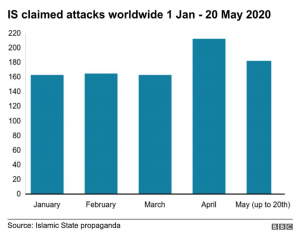 (Source: BBC Monitoring, based on data gathered from IS media outlets)

The group claimed a total of 212 attacks worldwide in April and 182 from the 1st to 20th May, compared to an average of 163 attacks in the first three months of the year. On 14 May, IS launched a global “Raid of Attrition” campaign that saw the group claim a flurry of attacks worldwide. It’s a similar story with al-Shabab and JNIM attacks.

And if the pandemic is having an impact on jihadist gatherings, they’re not showing it. IS, for example, released images in May showing its militants during Ramadan and Eid gatherings praying and eating together with no signs of social distancing. 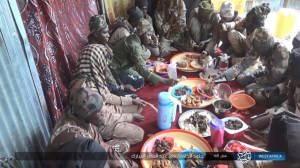 (Source: IS images from its militants in West Africa enjoying a Eid meal)

Jihadists are likely to continue to exploit governments’ preoccupation with the pandemic either to increase their activity or to rebuild their strength, seeing it as a respite from intensive military operations against them.

In April, senior al-Shabab preacher Fuad Shongole, who has a bounty on his head, said the pandemic was working in favour of jihadists. In an audio message, he said, “They [US] denied us movement and placed five million on our heads. Have you seen a flying plane nowadays?”, suggesting there were fewer US aircraft targeting jihadists. The congregation are then heard chanting “God is Great”.