The Coronavirus Isn’t Immune From the Far-Right

Far-right extremists online leap from one topic to another, trolling, distorting, and amplifying everything from widespread news stories to more arcane issues. No topic or trend is immune from their racist, conspiratorial twists and meme-laden posts, and the outbreak of the coronavirus is no exception. While the pandemic has cast a dark cloud over the globe, ravaging communities and bringing economies to a screeching halt, it’s been a great propaganda tool for the far-right. The crisis is, in many ways, helping far-right extremists recruit and further narratives they have peddled for decades, including closing borders and the accelerating collapse of society, and incite members and sympathisers to cause real world harm.

The devastating toll the virus has taken on certain segments of the population, and the global measures implemented to curb its spread, have mostly aligned with far-right messaging. Some have even been calling it “based corona”—based is a term referring to an individual or thing that promotes and furthers the white supremacy movement and seeks to empower white men. “Based corona” has closed borders, revealed the downsides of globalisation, and has disproportionately impacted African Americans, among other things. “Based corona chan is literally [the] aryan virus,” an anonymous user posted on 4chan’s /pol/ board [politically incorrect]. One neo-Nazi Telegram channel emphatically stated that “Corona did more than I ever could have imagined. Shut down worthless Sportball [sic], Hollywood, provided a damning indictment against globalization, AND made borders relevant again. People are reminded of their morality once again, and the road to the third position becomes easier to tread. Hail victory!”

The coronavirus has also proven to be an ideal primer for far-right recruitment efforts. One group on Telegram pointed out, “We don’t need to convince the masses of our ideas. The pandemic has already done that…Whites panic bought guns, food, water, and prepare for social unrest all on their own without seeing what we’re saying on Jittergram.” Members of the Proud Boys in Canada have also “been using their lockdown time to recruit,” posting propaganda flyers across cities in Ontario and British Columbia. Another UK-based white nationalist group posted stickers in New York, Texas, Oregon, Utah, Canada, Ireland, the Netherlands, and numerous cities across the United Kingdom, including some that read “CLOSED BORDERS The Best Vaccine,” “Nationalism Would Have Prevented This,” “Open Borders Spread Disease,” and “Migrants Accepted NOW WE ARE INFECTED.” 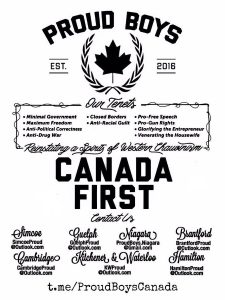 While navigating a web of far-right messaging on forums, imageboards, and encrypted apps, one also encounters a myriad of daily atavistic threats, often disguised in coded references. Far-right actors have exploited the pandemic to mobilise members and sympathisers to spread fear and cause real world harm. A far-right Telegram channel advised members to racialise and politicise the crisis. The group outlined a number of steps to destabilise the economy and accelerate the collapse of society, including exacerbating racial tensions, celebrating the mounting death toll, and hoarding supplies. Groups have also encouraged those diagnosed to spread the virus by frequenting Jewish and Muslim houses of worship, coughing minorities, and targeting high traffic areas by touching “door handles, handrails, restrooms, and sink taps.” An anonymous far-right user on 4chan’s /pol/ board encouraged others to “spread this virus far and wide, anons. We need to rid the world of blacks and boomers, cough on produce, wipe your hands on every packet of toilet paper, this is our chance to wrest [sic] back the control of the world.”

It comes as no surprise that the far-right is exploiting and applauding a virus as sinister as their intentions. While the impact of the far-right’s efforts remains to be seen, the spread of the coronavirus is broadening their reach and fanning the flames of hate. The pandemic has been a cause for celebration among the far-right and a wakeup call that the right was always right—borders are now being closed, minorities are proving to be biologically “inferior,” globalisation is menacing, and the accelerating collapse of society will finally hasten the creation of an all-white utopia.