There are a number of reasons why Tunisians joined the Islamic State in Iraq, Syria, and Libya. One underappreciated aspect of this is the way Ansar al-Sharia in Tunisia’s (AST) messaging primed members of the group and others in society that were exposed to, attended, or followed online AST activities and events. In my new book, Your Sons Are At Your Service: Tunisia’s Missionaries of Jihad, I describe this process, which I will examine in brief here. In particular, I will explore AST’s motivational framing, which “functions as prods to action.” The major themes AST crafted in its narrative was related to brotherhood, the defense of Islam, the creation of an Islamic state, and remaining as an entity. 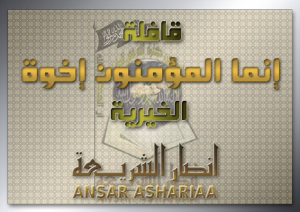 One of the most widely used motivational themes in AST’s messaging and the way it promoted its events was the development and assistance of one’s brother in religion. For example, some of the brotherhood-related slogans put forth by AST included: ‘The Muslims Are Brothers of Muslims’, ‘Worshippers of God Are Our Brothers’, and ‘The Believers Are but Brothers’. The ideas of brotherhood and solidarity were important selling points to individuals potentially interested in becoming involved with AST. These individuals feel they have an opportunity to join fellow brothers to work together for a better vision in society. This then builds loyalty and willingness to sacrifice for one another in pursuit of AST’s goals. For young individuals struggling to find a place in society, this idea of a family can be seductive. It is even more so the case when AST recruiters approach individuals at markets and in the streets to pass out literature about events that promote familial messages. These recruiters make an individual feel warm, welcomed, and valued. Furthermore, the opportunity to be part of a group that acts on behalf of God provides an added level of significance. These positive emotions, according to Jeff Goodwin and James M. Jasper, give the individual “pride, security, and confidence.” An AST member once explained how one of his friends joined the group: “One day he came to see me to understand what was this special feeling that we shared. We are more than friends; we are brothers. We share ethics and between us, there is a special strength and solidarity.”

Relatedly, another motivating frame AST used was the necessity of supporting and defending God and Islam. While society had indeed opened up, AST still believed that Islam was under attack and people were unable to properly worship as they saw fit. For instance, a member of AST named Iskander Bughanmi explained that “when we try to spread our message about God’s law, we are stopped and we are persecuted.” Therefore, AST’s pitch was that even under a so-called democratic system, they were still treated as enemies of the state. From AST’s perspective, if individuals subscribed to the ideology of the group, they were on the side of God and religion. As such, if they wanted to work on behalf of restoring the place of God and the dignity of Islam in society, they should join the movement. 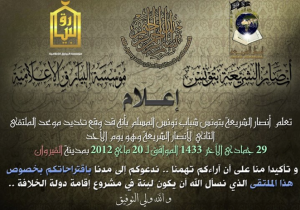 The building of an Islamic state is the third motivating frame used by AST to encourage people to join its group. It is so important to the group that, when it published its first advertisement for its second annual conference in May 2012, it framed the event as “a building block in the project to establish the Caliphate State.” Furthermore, the title of the third annual conference a year later was “Supporters of Islamic Law, The Islamic State We Are Building,” suggesting that it was no longer an objective for the future but rather was a process that AST had already begun.

After the third conference, AST began using the slogan ‘We Are Building the Islamic State’ to further signify the ongoing process and push individuals to join the historic project. This messaging frame is the ultimate tool in fostering an individual’s sense of significance. It asserted that one could be part of a project larger than one-self: the reestablishment of an Islamic state in Tunisia. Therefore, those same youth who have education, skills, and desire to give back to their community can now feel empowered. AST sought to contrast that feeling of empowerment with the feelings sparked by a corrupt central government that does not want to empower youth. Recognizing these grievances, AST always repeated the slogan ‘Your Sons Are at Your Service,’ which is the reason I used it for the title of my book.

This highlighted the importance of not only giving back to one’s neighborhood but also honoring those involved in such work. It also helped that AST provided evidence (by posting all of its activities on its official Facebook page) that it was indeed building this shadow structure of works and services in various communities throughout Tunisia. Consequently, the more charitable and outreach activities AST orchestrated, the more individuals joined up, which in turn allowed AST to organize and conduct more activities more often in more locales. 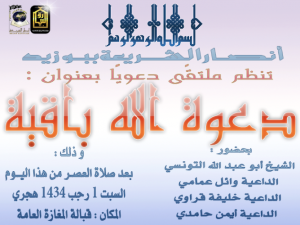 The final motivational frame used by AST came later in the group’s development. It only emerged when the Tunisian government began to crack down on its activities following the assassination of Tunisia’s secular politician, Shukri Bila‘id, in February 2013 and in the lead-up to AST’s third annual conference in May 2013. The government began attempting to completely shut down dawa events and prohibit members from legally organizing. Beginning in mid-May 2013, AST began to promote its activities by using the slogan du‘wat Allah baqiya (the call of God remains). Unlike the above frames, which evoked more positive messages to encourage people to join AST, this one used a more negative appeal. It posited that AST needed all the help it could get to defend its vision against an existential threat. It was a rallying cry for support, but also a message of defiance in the face of what it perceived to be an oppressive tyrannical regime.

Ties to The Islamic State

As IS began building itself up in Syria after it proclaimed its official entrance into that theater in April 2013, Abu Waqas al-Tunisi became the face of IS’s dawa program, appearing in six of its videos by the end of 2013. These activities—which included giving lectures, distributing gifts to children, and reciting the Qur’an in competitions, among other things—allowed ISIS to ingratiate itself with locals and dispel negative views many had of the group as a result of its conduct during the Iraq jihad (even though it would eventually revert to such practices, especially after January 2014 when the Syrian rebel opposition and Jabhat al-Nusrah turned against it). The activities were also ways to attract foreigners, including Tunisians, to the group to prove that their previous efforts with AST could continue under IS. This idea would resonate with many AST recruits who felt that their mission in Tunisia had only just begun and that they would eventually spread their dawa globally, according to an AST member I interviewed: “The dawa is going on and then after it, it is global work, not just in Tunisia.” It is no surprise, then, that ISIS’s Voice of al-Sham magazine in September 2013 featured a picture of Abu Waqas with the Qur’anic verse 49:10 (Surat al-Hujurat) “the believers are but brothers” next to him. This was one of the same framing devices that AST used to attract followers, as described earlier.

The idea of defending Islam was also important for IS propaganda, especially as it related to Tunisia, in the Islamic State’s first video message directed at Tunisia in mid-December 2014, Abu Muhammad al-Tunisi, a Tunisian foreign fighter based in al-Raqqa, Syria, explained how the murtadin (apostate) leaders of Tunisia oppress Muslims. This perception is a result of state policies going back to Tunisia’s independence when the first president of country, Habib Bourguiba, made a series of legal reforms that pushed Islam to private life. This issue, Abu Muadh al-Tunisi affirms, is what got him interested in joining IS, “Would I be lying to you if I said I used to pray in Tunisia? We did not pray. In Tunisia, we were religiously cut off. There was corruption. After the revolution, preaching tents erected by salafi-jihadists spread throughout the country. So I went to some of the tents of AST. They came out of prison bearded. This was something I had never witnessed before, something new. I started attending these tents, where they gave out leaflets on how to pray and perform ablutions, and urged us to wage jihad.”

The idea of building an Islamic state/Caliphate is relatively self-explanatory. However, it should be noted, especially as it relates to the latter, the fact that AST was promoting such an idea in 2012-2013, illustrates how seamless it was for Tunisians to then follow suit as the Islamic State began to discuss these ideas more forcefully in 2013-2014. This is why a Tunisian named Ahmad supported IS, “The Islamic State is a true caliphate, a system that is fair and just, where you don’t have to follow somebody’s orders because he is rich or powerful. . . . It is action, not theory, and it will topple the whole game.” For her part, the Tunisian woman Khadijah ‘Umri said she went to Syria with her husband in the “hope of leading the kind of religious lifestyle they had long dreamt of.” It was “for jihad, for sharia and the Islamic State…I really believed that there was a state where we could live like the Prophet.”

As it relates to the issue of remaining, the idea originated from a speech by the Islamic State of Iraq’s (ISI) leader, Abu ‘Umar al-Baghdadi. In Abu ‘Umar’s April 17, 2007 speech, which assessed ISI’s jihad (religious military struggle) after four years of fighting the Americans in Iraq, he concluded with a series of statements that started with baqiya that began by saying wa ina dawla al-islam baqiya (and verily, the Islamic State remains). The exact words were later cited by the ISI’s official spokesman Abu Muhammad al-Adnani in an August 7, 2011 speech to try and rally the troops to remain positive since ISI had been weakened so much by the tribal awakening and the American military surge of troops of the prior four years.

Therefore, in some ways, AST was playing off of this in their own messaging. Unlike ISI, however, following the group’s designation as a terrorist organization by the Tunisian government in late August 2013, the group more or less became defunct even if it attempted to continue to operate in Tunisia through the end of 2013 and post propaganda of encouragement online through the summer of 2014. As for IS, the term baqiya would be further cemented as it became more of a rallying cry for IS members and recruiters following IS’s April 2013 entrance into Syria and its defiance of al-Qaeda’s Ayman al-Zawahiri’s demands that IS remain in Iraq. IS’s leader at the time, Abu Bakr al-Baghdadi, rebutted by saying they were remaining in both Iraq and Syria. IS and its supporters only later added the term tatamaddad (expanding) after ISI’s successor entities ISIS and IS began to take territory in 2013-2014 and the full slogan became baqiya wa tatamaddad.

These various messaging factors used by AST when it was active from 2011-2013 highlights how many similar features in IS’s media later encouraged and cemented many of the themes that became second nature to Tunisian jihadis. Therefore, understanding these pre-histories in important for tracking the evolution and symmetry within the jihadi movement writ large.

Parts excerpted from Your Sons are at Your Service (c) 2020 Columbia University Press. Used by arrangement with the Publisher. All rights reserved.